Jim
Corporate Member
Thanks for showing us all the pictures of the process. Enjoyed following this thread.

I bought those hold fasts when I built the bench. They where hand forged by a blacksmith (who’s name I don’t remember) East of Pittsboro and a friend of Ed at the tools store there. They work well on this bench and are well worth what I paid. Now for the record these are not Peter Ross hold fasts, I would have liked a pair from him but he had a long wait and these were ready, so there you go. A quick history on my hold fasts. I think they not only look good but they hold extremely well too.

Michael
Corporate Member
seeing your Zyliss vise makes me realize that I've got one that I received as a Christmas gift back in the mid 90's! As far as I'm aware, mine is complete with the drill clamp to convert a drill motor into a lathe! I'll have to dig mine out and see if it will clamp onto my bench. It sure would be handy from time to time. BTW, great work Richard!

Richard
Corporate Member
I had to look back to see where we were, dang that’s a lot of pictures, and that’s the ones that made the cut. Well we are coming down the pike with this one. So here we go. 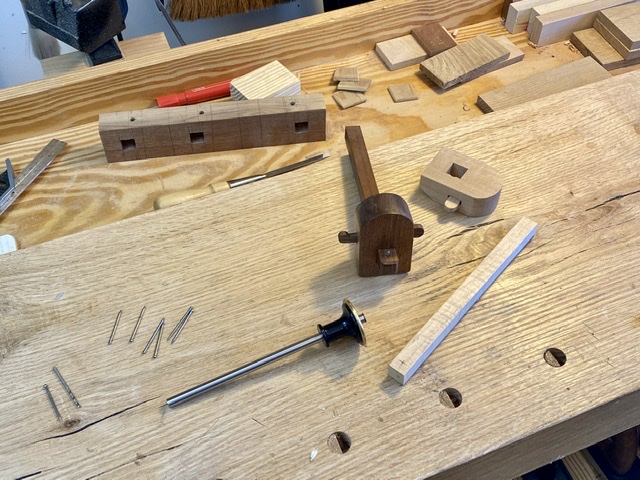 so I started with marking the beam with a center for the marking point, blade, or what ever you want to call it. For the first couple I wil use a 5/64” drill bit. For some others I will use a nail about the same size. I could order in some material like tool steel rod at about the same size and shape it and then harden and temper. For at least one I’m going to make a cutting gauge and use a worn out saber saw blade and I’ll shape it sharpen it and then I’ll setup the beam to take the blade. It’ll be interesting to do and it’ll be a useful tool for my tool kit. 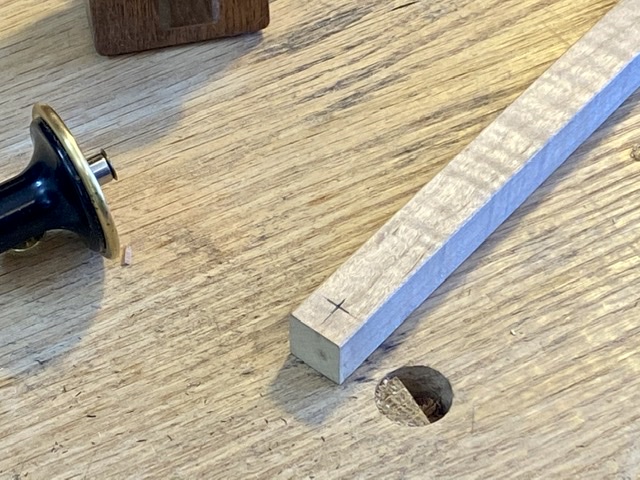 as I stated I mark the center for the point and I drill from both sides. 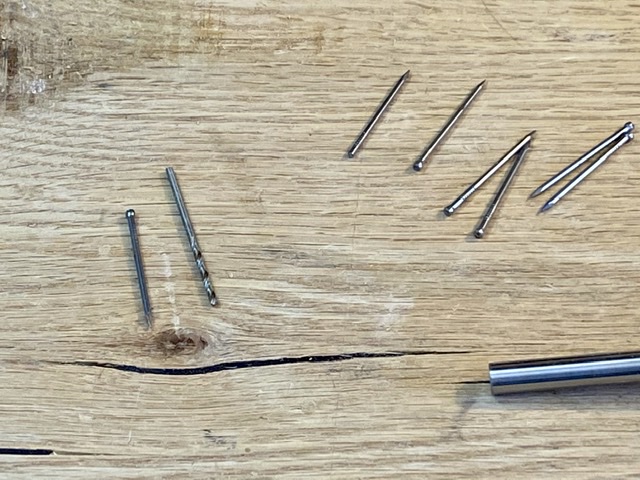 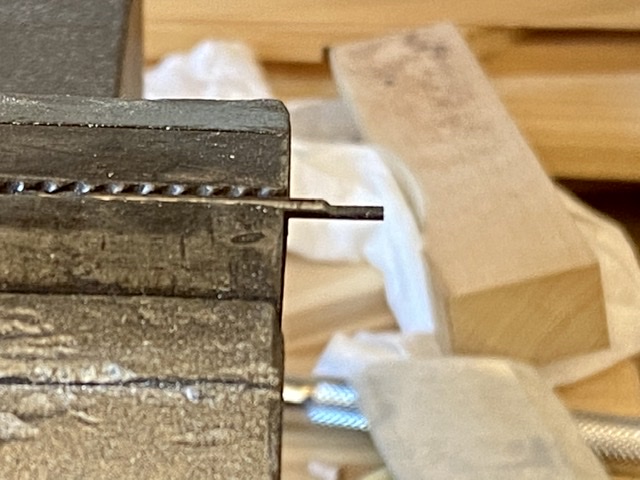 I clamp up the bit and I file a flat on one side I guess for about 3/16” by about half the width of the bit. 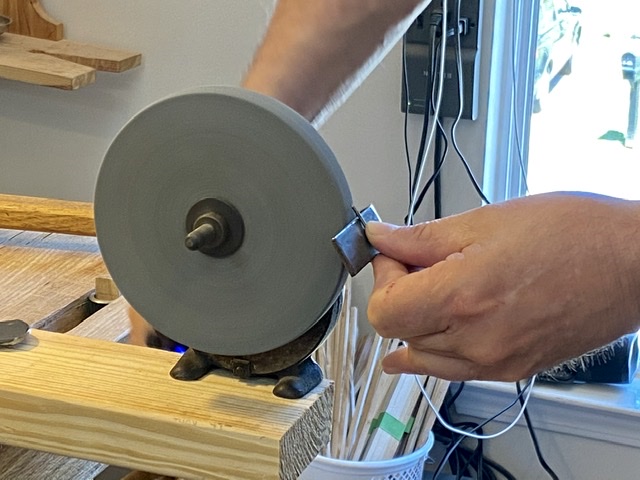 from there I grind an edge on the round side much the way you would grind the edge of a boll gouge the angle I just guessed I didn’t worry about it I just new I wanted something shallow. 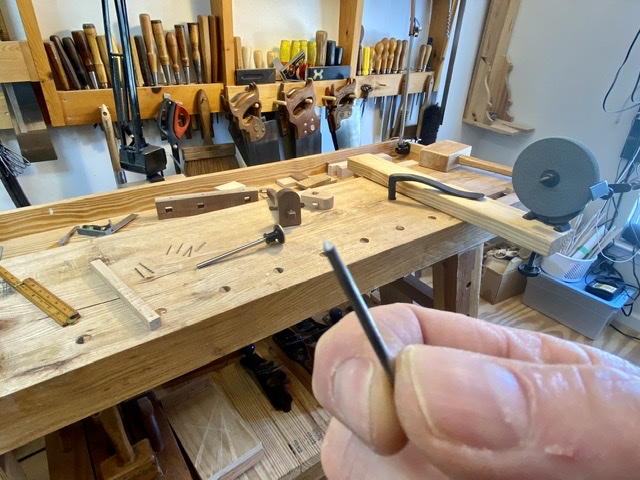 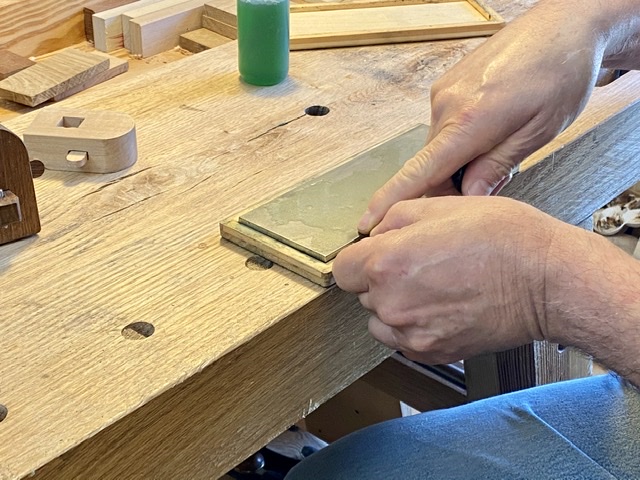 I used a fine stone to flatten and polish the flat side. I touched the bevelside some, but it’s not an easy task with these big knuckle drug hands. 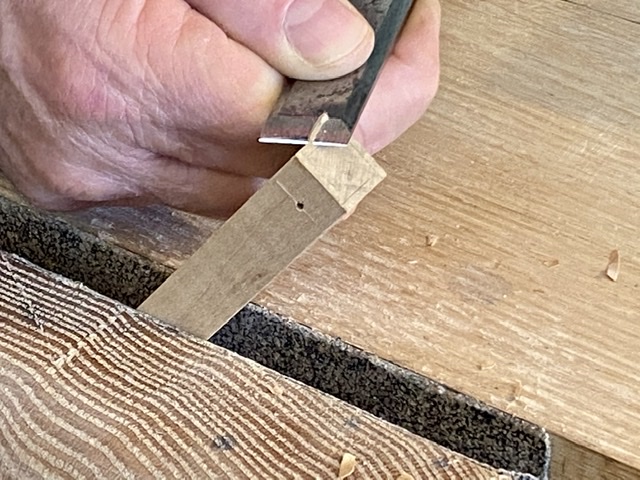 one of the last touches for the beams is to chamfer the ends. 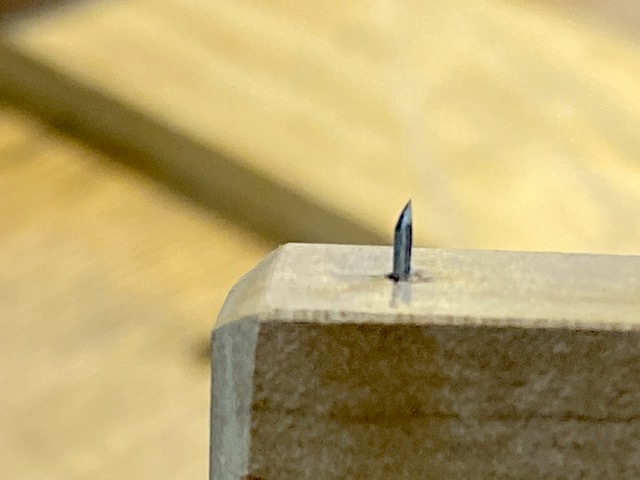 drive the point into place and adjust. You can set the flat side either way. I like the flat side toward the head, that places it to the finished piece or what I want to use and the bevel side is toward the waste. 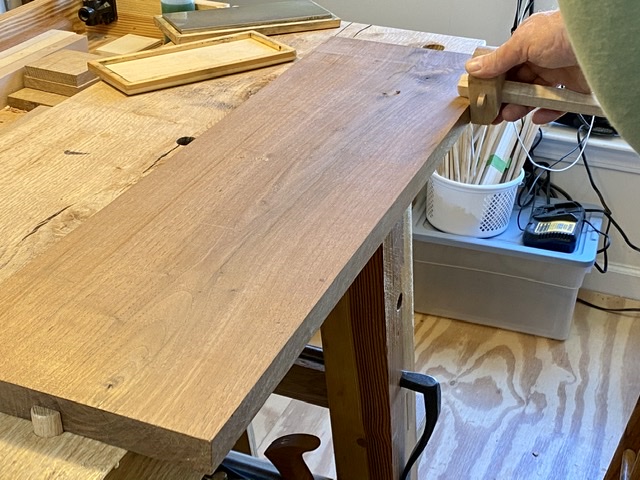 run a couple test runs and see how it marks 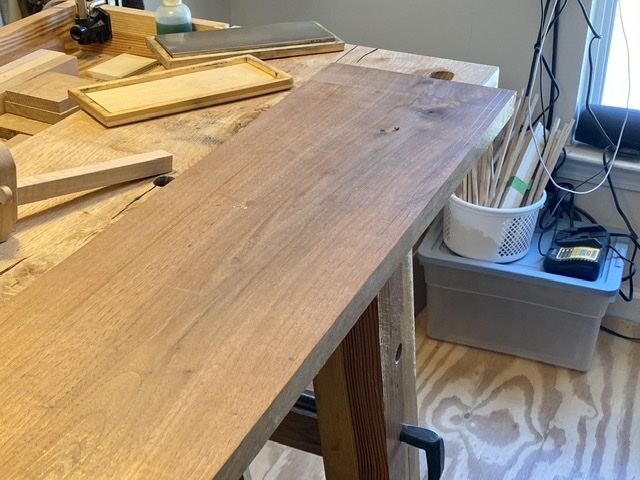 if you zoom in you will see it marked really well. I was satisfied anyway. 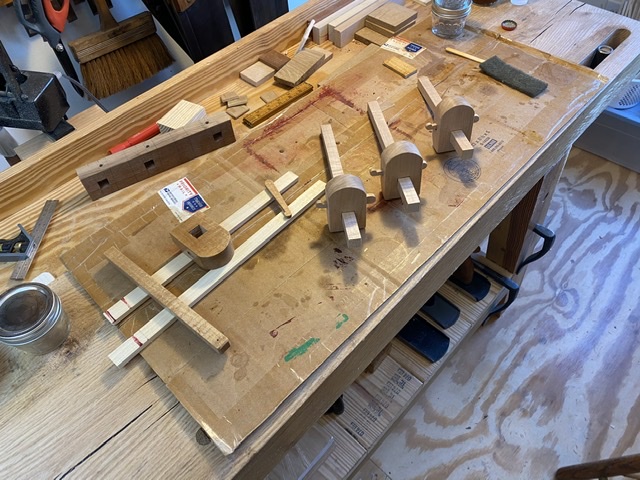 so for this one it’s time for finish, so I pulled the point and because I had it mixed up I used blonde shellac. I keep a ball pad made up in a jar that’s ready to go. I now will catch the the three on the bench up with this one and then start finishing them. The remaining seven I’ll work on when I can while I think about the next project on the list. I need to build a built in linen storage in our master bath, re-trim the bath and repaint the room. I may replace the floor I’m not certain yet.

Graywolf said:
...I keep a ball pad made up in a jar that’s ready to go.
Click to expand...

Would you mind explaining what a "ball pad" is and how you use it for applying shellac and how you store it?

Rushton said:
Would you mind explaining what a "ball pad" is and how you use it for applying shellac and how you store it?
Click to expand...

Yes, I’ll gladly do that. I’ll put that together this evening when I get home. It’ll be easier to show you how to use and even make one.

Richard
Corporate Member
Ok, I shot this last evening and then got side tracked with something else. My apologies for making you wait.
a pad, a ball pad, or what ever one wants to call it is as follows. A clean lint free rag filled with cotton balls or I’m currently using cheese cloth. Pulled together and it can be tied off with several things or I have one that is just pulled together and I hold it in use. 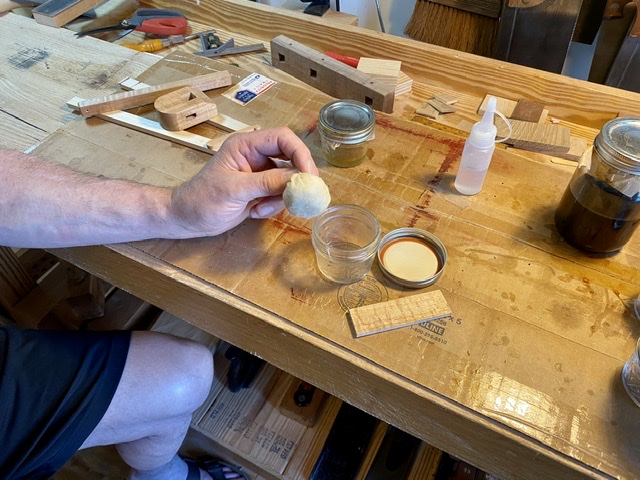 I keep these stored in a jar with a good lid. You can make these in various sizes, this one is a pretty good sized one. 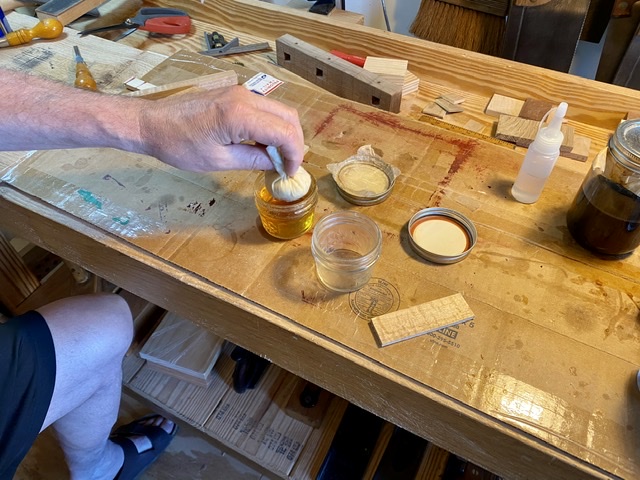 I simply load them with shellac by dipping them in another jar of shellac. 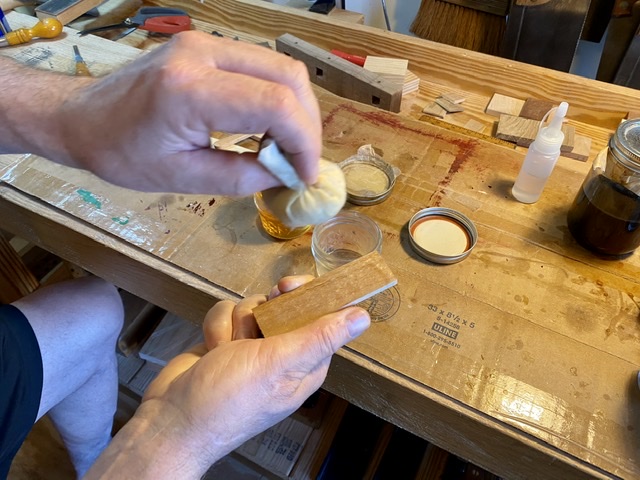 and of course you simply wipe the pad onto the surface applying a thin coat of shellac. When I mix shellac a generally start with a two pound cut and I thin it in about half. That is what load my pad with and a little can go a long way.
so I need to make a small pad for another mix and here we go. 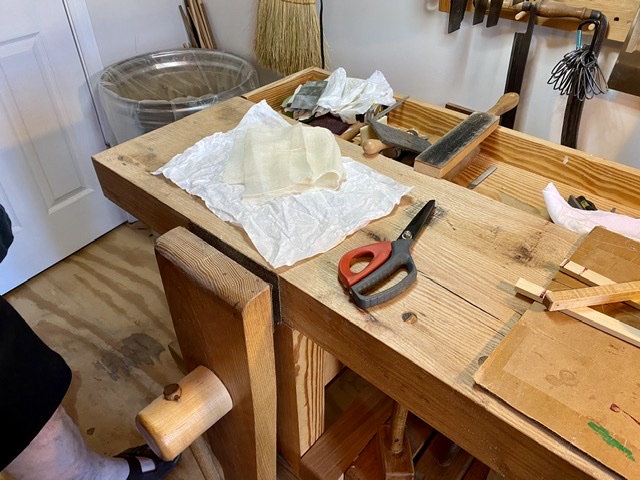 materials, one rag, cheese cloth this is a fairly fine thread count, and something to cut things to size. 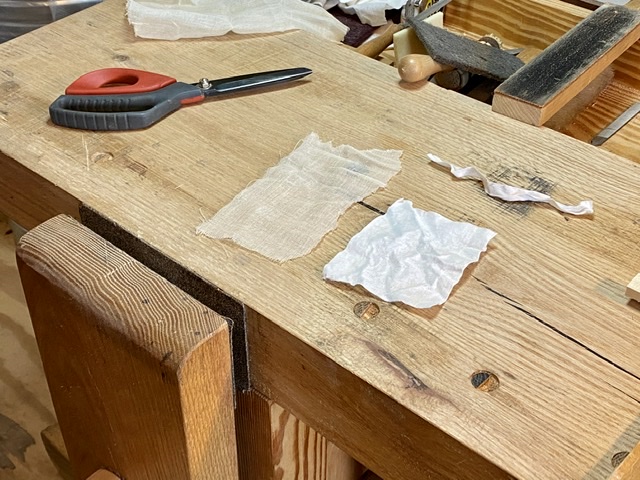 everything cut to size 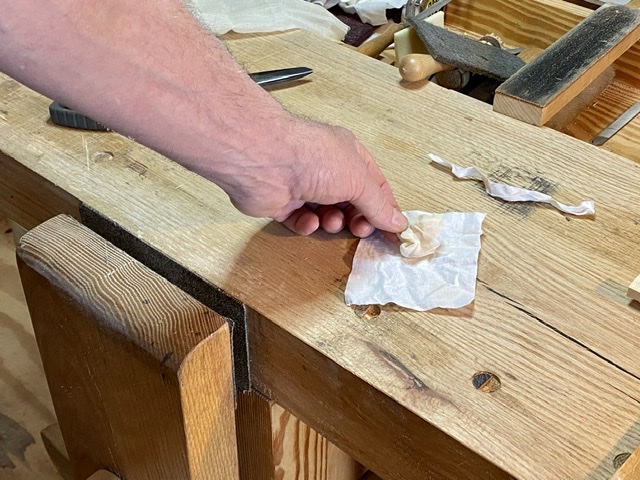 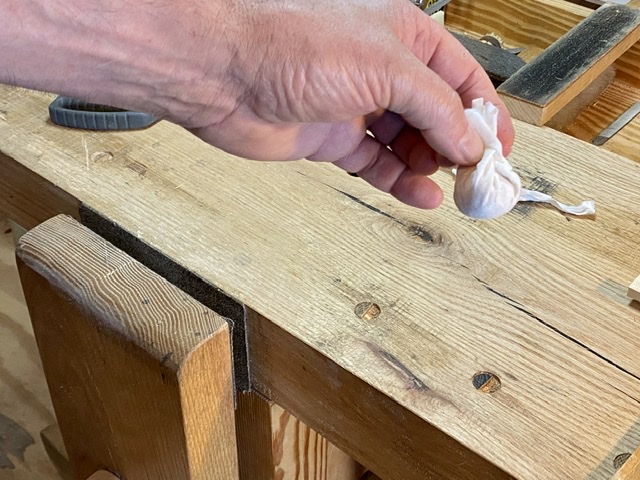 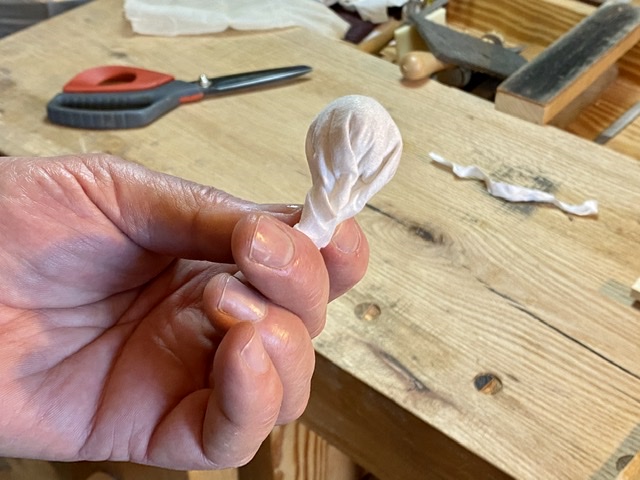 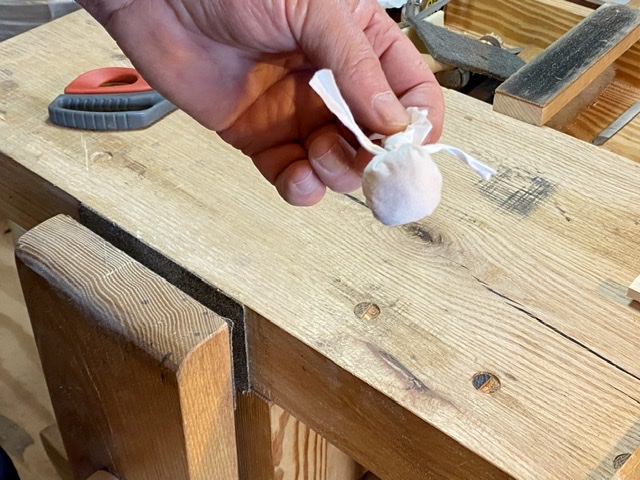 tied off, you could use a rubber band but I like just using a piece of rag, that and I’m out of rubber bands. 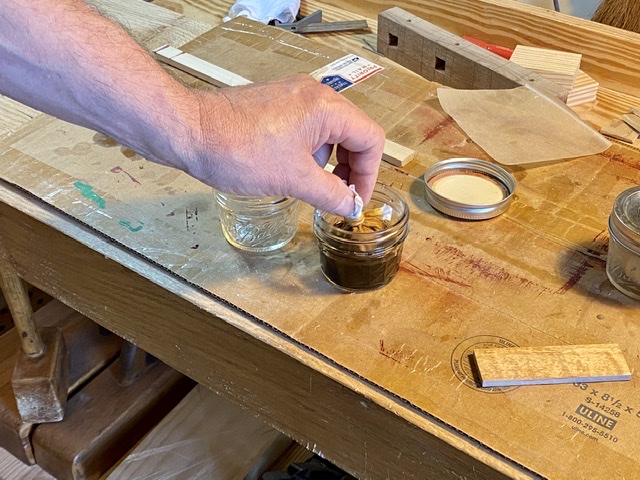 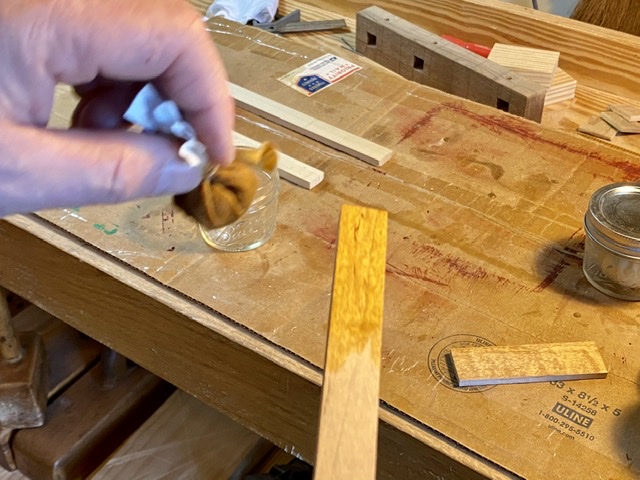 apply shellac to your material.
i hope this helps, I have been able to hold these pads in a jar for a couple of months. I generally store the jars in a cool dark place until needed. The thought behind this is the cheese cloth holds the shellac and it is dispersed through the rag, like the bristles of a loaded brush holds the materials while the tips apply and disperse the materials. I have only been using this type of thing for a couple years, but I like it and the results.

Rush
Senior User
Thank you, Richard. This is a VERY HELPFUL explanation and set of photos. Shellac is my preferred finish for most things, but I've always brushed it on. I look forward to trying this.

One more question: Do you purchase shellac flakes and mix as needed, or do you purchase pre-made (e.g., Zinsser) and thin as desired?

Richard
Corporate Member
I buy the flakes currently and I grind them up in a coffee grinder. Less waste when I strain the mixture.
Last edited: Apr 15, 2020

Rush
Senior User
Thank you. I've been thinking about purchasing flakes to work with, but have never yet done so. Have to give this a try!

Richard
Corporate Member
You can just mix up close to what you need, with less waste. I generally weigh the flakes and then measure the alcohol by volume. 2oz of flakes makes almost a pint, and that goes pretty far.
You must log in or register to reply here.
Share:
Facebook Twitter Reddit Pinterest Tumblr WhatsApp Email Link