Donn
Corporate Member
I am happy to post that I have completed the kitchen island! It took me two months, but it is done. You guys that do this kind of work on commission have my utmost respect, I am so slow clients would grow old waiting for me to complete the job. That said, while it did take me awhile to get it done, it was fun to build. The top is hard maple but the rest of the cabinet is ash. As you may recall, I posted a thread regarding the fact that I wanted to use General Finishes White Poly (waterborne polyurethane) as the top coat, but I was struggling to color match an off-white that my wife wanted. After a little soul searching as well as some encouragement from some fellow woodworkers, I decided to use the White-Poly and tint it myself (my wife had the final say as to when we reached the desired end-point). It worked out extremely well! The waterborne poly produces a beautiful finish! Moreover, if I had used paint it would have taken me five or six days to prime and paint enough coats to produce a smooth finish. With the waterborne poly, I primed (General Finishes Stain Blocker) two coats and applied four coats of poly in less than two days...the stuff dries very quickly and it dries hard and smooth!

In the pictures below, you will note that the island has an overhang in back that will serve as a bar (two stools have been ordered); the front has two middle drawers and two spice storage cabinets on each side. My original intent for the spice cabinets was to have stationary shelves but I soon realized that in order to allow sufficient room to find and remove the spice containers I would have to limit the number of shelves in each cabinet. Installing slides allowed for more shelves and hopefully less aggravation finding and getting whatever is needed. As to the finish on the top, I stuck with my old standby, five coats fo Minwax Wipe-on Poly (Satin).

The next big challenge will be to round up enough of my young neighbors to move the beast to the kitchen. Since the top has not been totally secure, it comes off, but it is still a beast. I need to pick smaller projects. 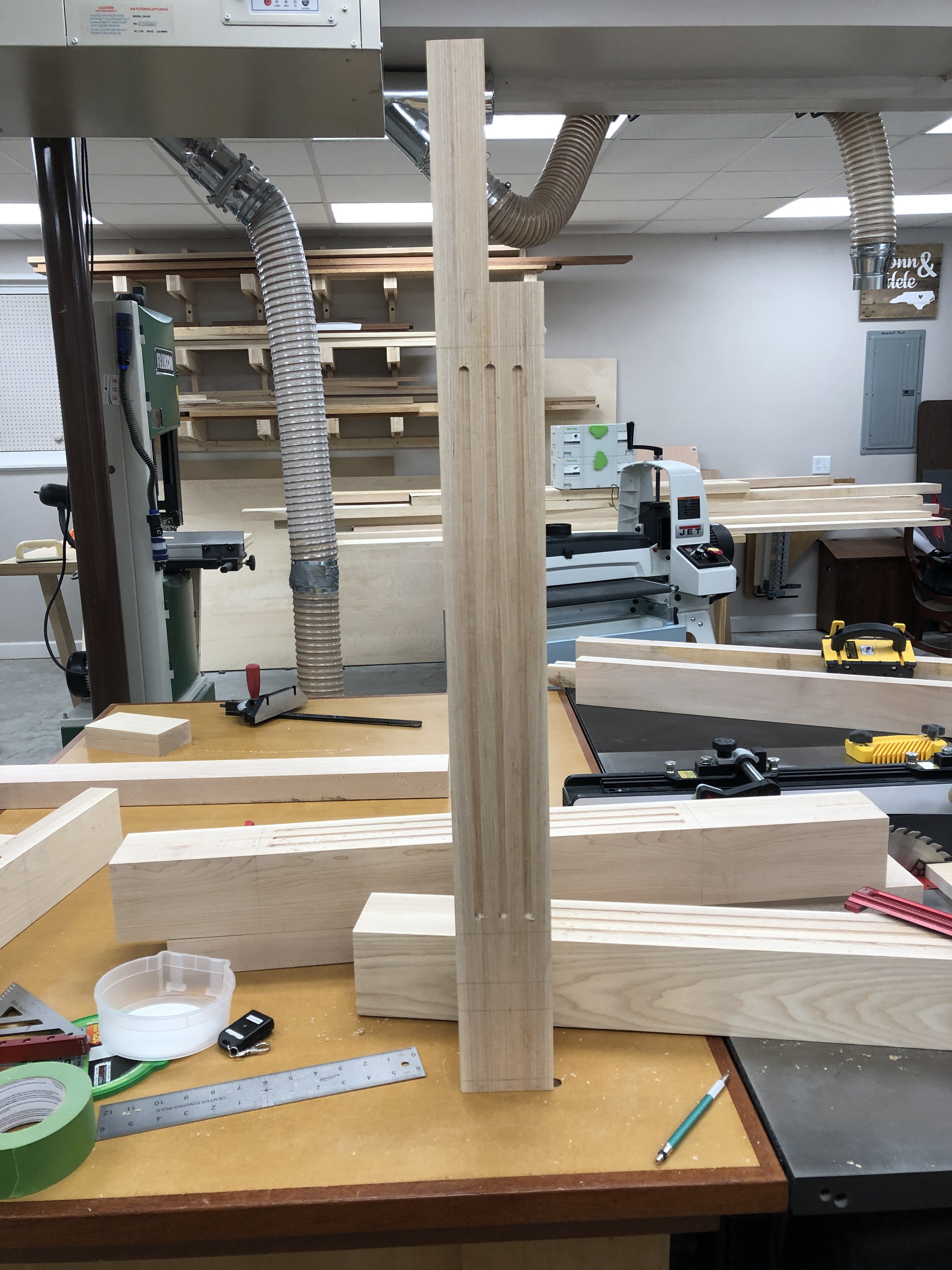 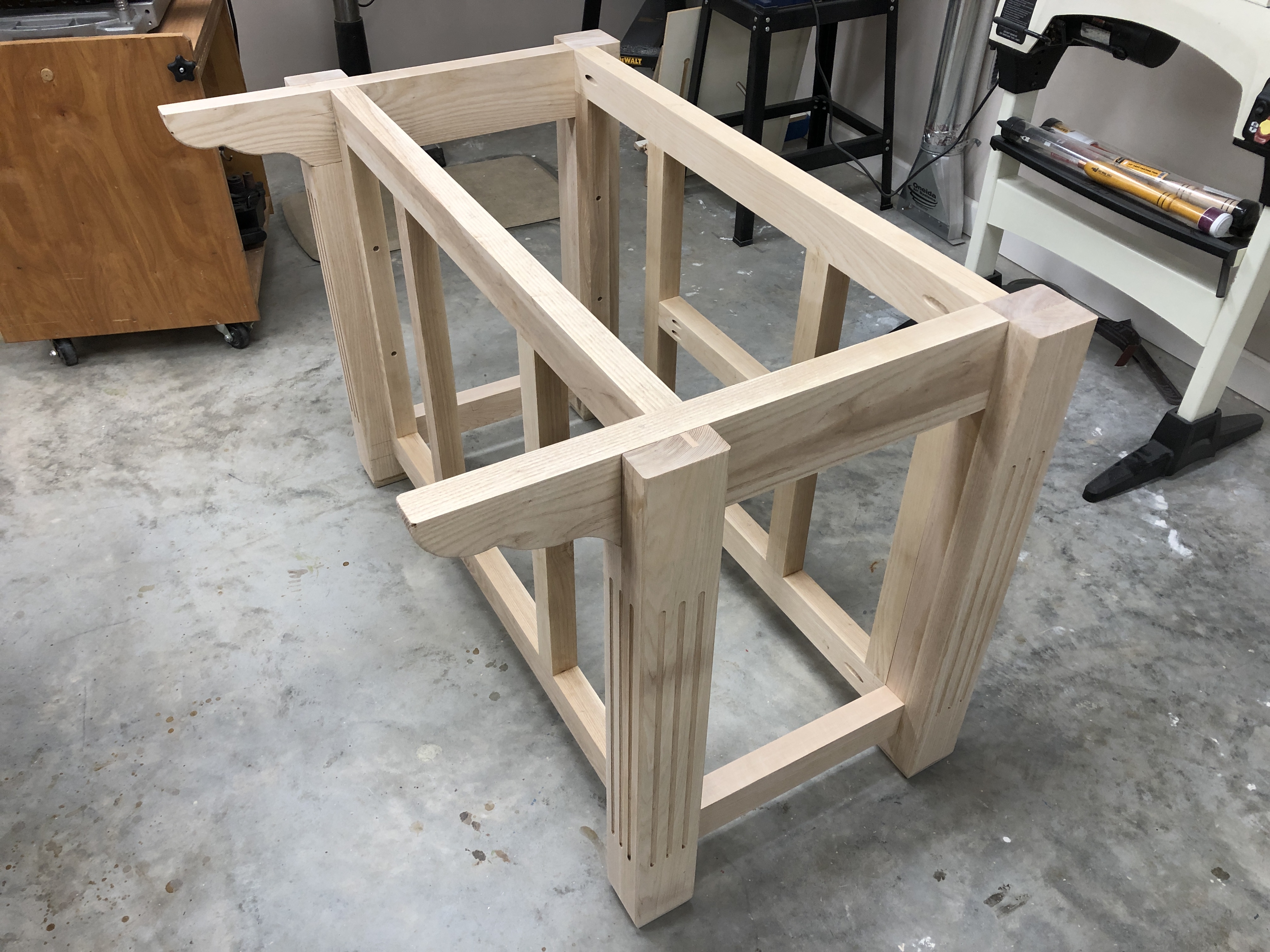 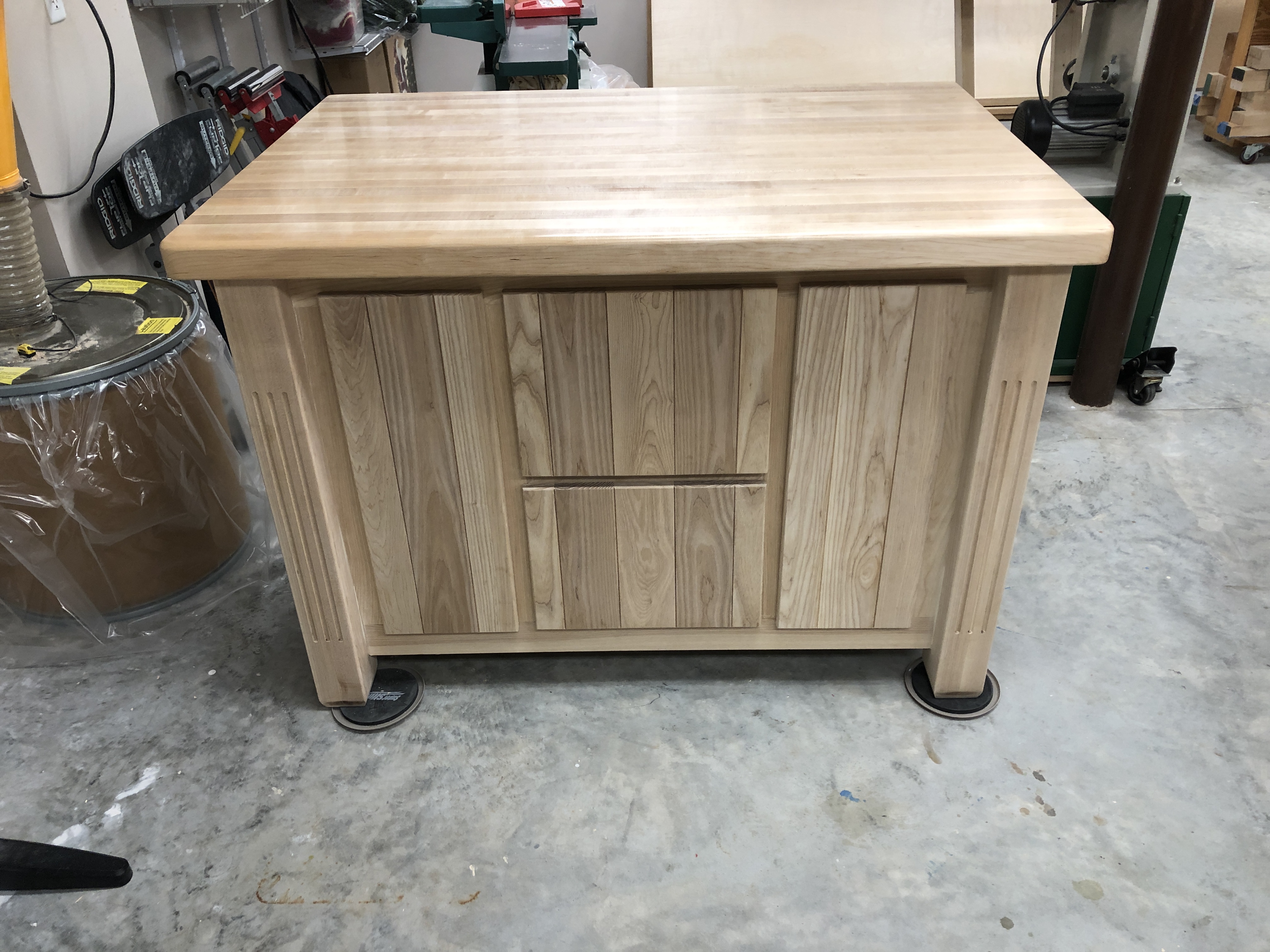 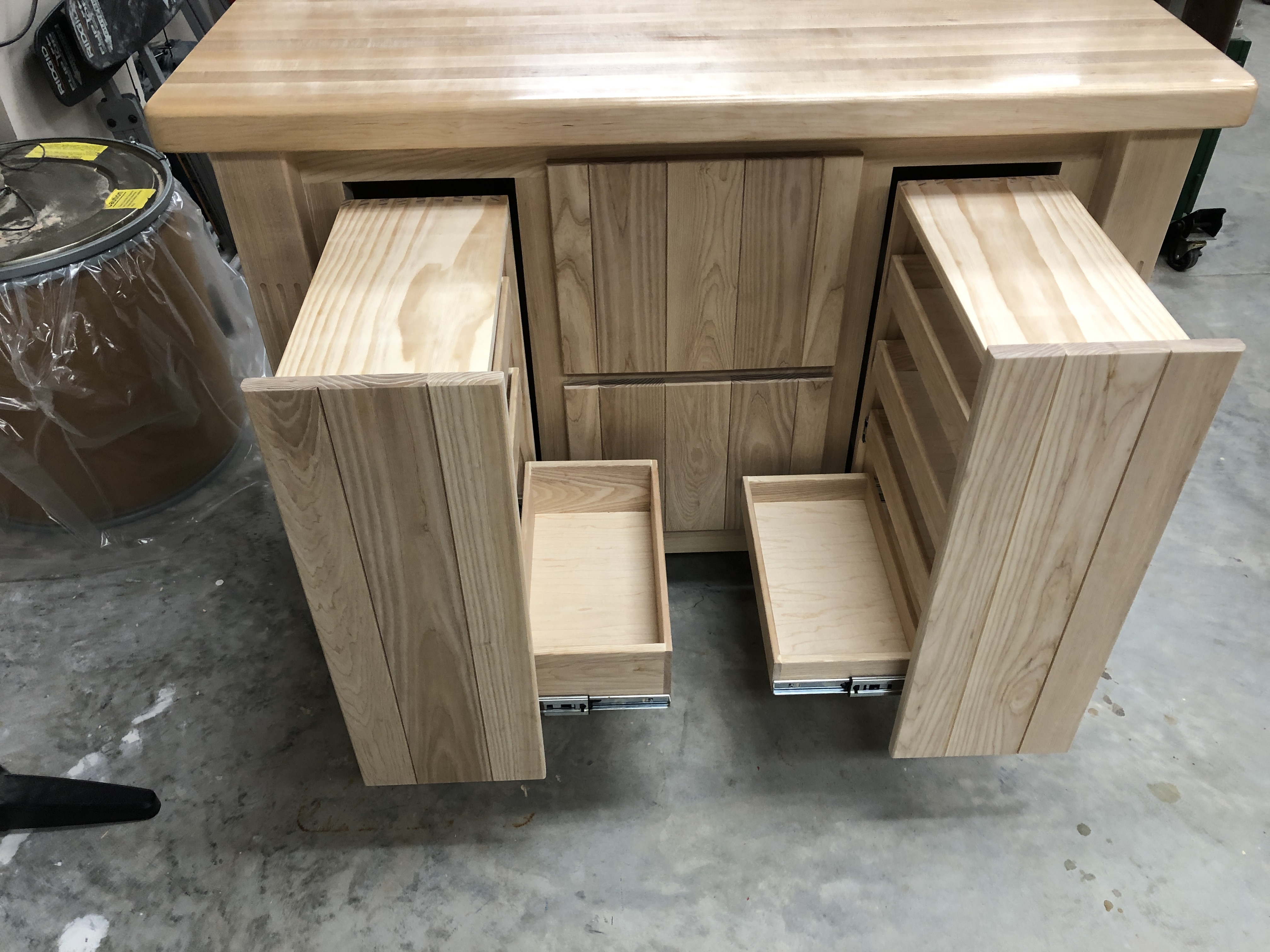 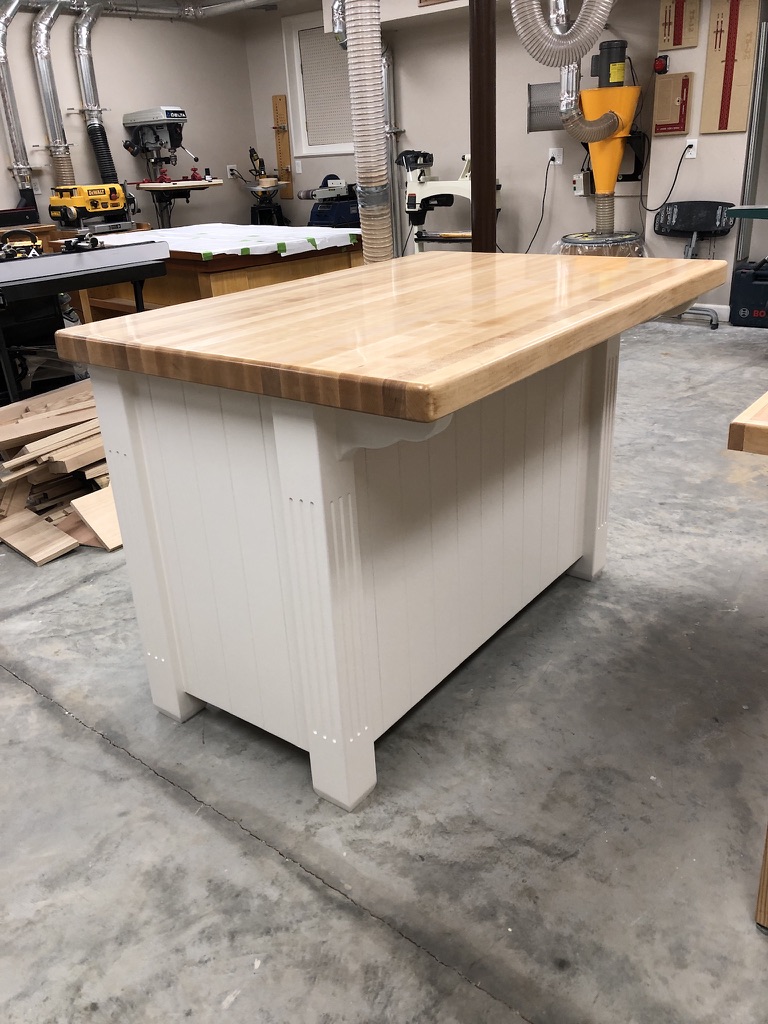 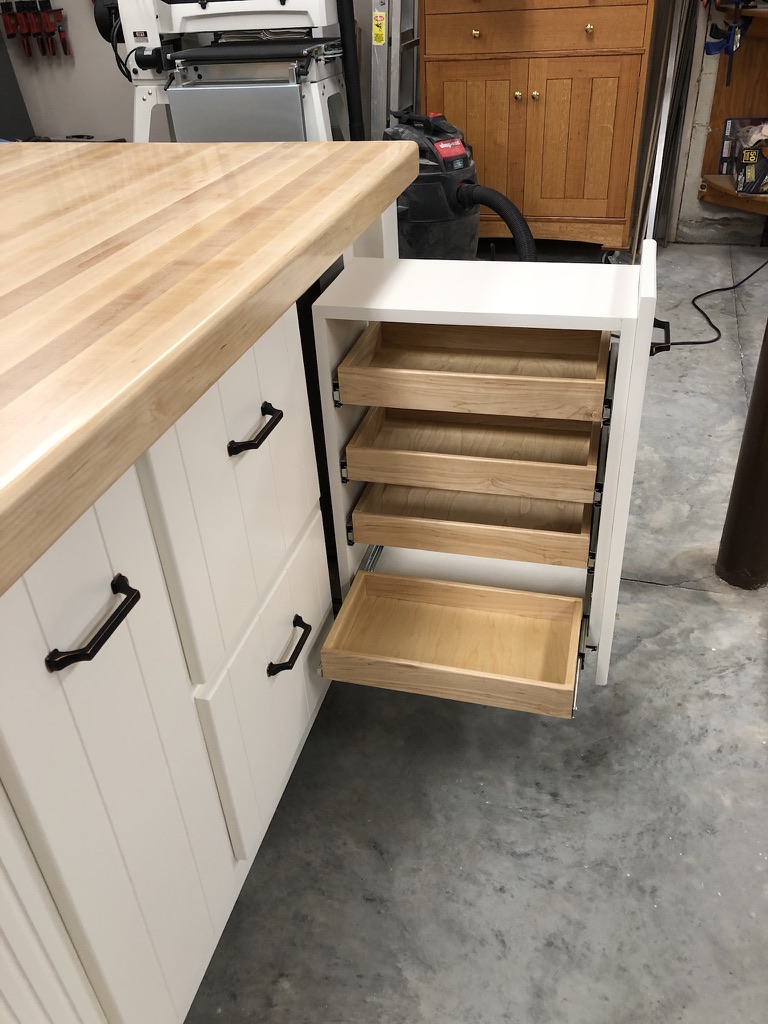 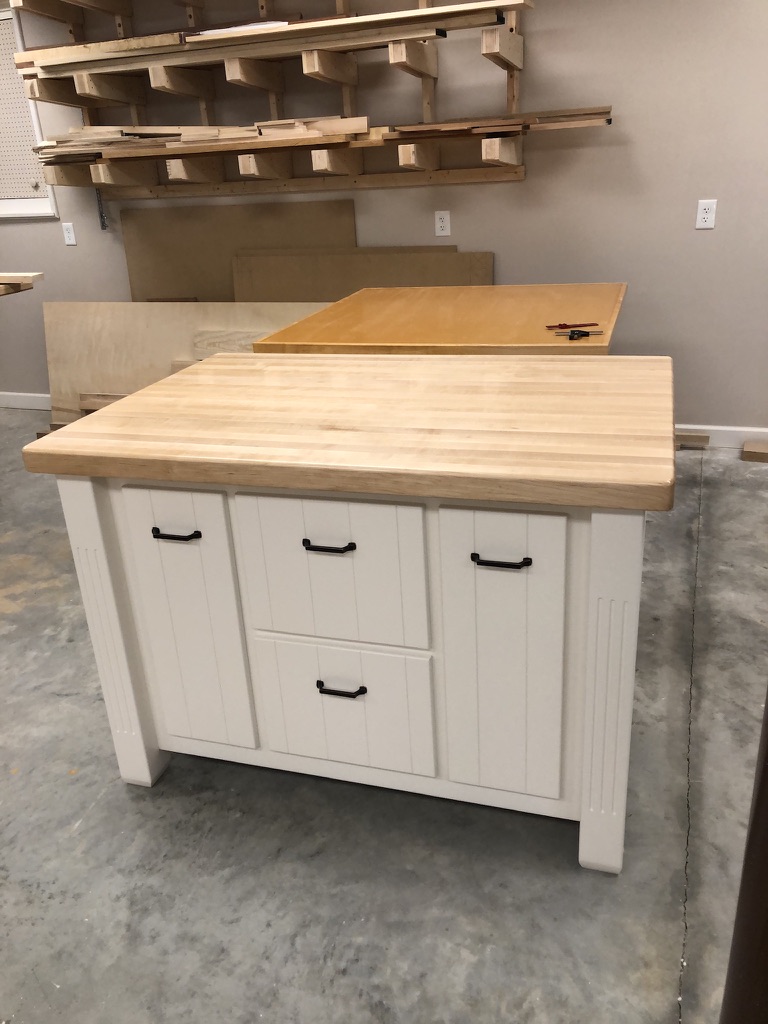 Bill
Corporate Member
Wow! That is one solid piece of work. Well designed and well executed.

Ken
Staff member
Corporate Member
You're really getting good at this stuff.

Jack
Senior User
EXCELLENT WORK that quality level is seldom seen in the real world. As to time, nobody is going to make that island in a heartbeat. In my shop without interruptions is at least a month. So you did great. LOVE THOSE END DRAWERS somehow that idea may just be "borrowed" just saying

Jeff
Corporate Member
Nice design. You and Adele will be able to have a lot of spices on hand.

Jeremy
Staff member
Corporate Member
Looks great. What did you use to tint the water based poly white?

Raymond
Corporate Member
You did a great job, Don!
J

Jeremy Scuteri said:
Looks great. What did you use to tint the water based poly white?
Click to expand...

Jeremy, I ordered from an online supplier (US Paint Supply). The products are Cal-Tint II-Universal Colorant. Based on an earlier purchase from Sherwin Williams of an off-white latex paint, I knew the three basic colors they used (the code is on the lid) so I purchased those three colors (yellow, blue, burnt sienna ...SW uses maroon, but I couldn't find a maroon tint so I substituted burnt sienna) and went with the ratios used by SW as a starting point.
J

I'm curious about the dimensions of your kitchen island. Length, width, & height. Interesting design too. Why did you use Ash for the base instead of a cheaper wood if you intended to paint it?