Ron
Staff member
Corporate Member
My neighbor ripped out his kitchen so I spent a few days relocating the junk cabinets into Margy's garden shed. As it didn't come with a countertop, I just got a dozen two by fours, ran them through the jointer and glued them up.
While I was poking around Lowe's looking for something to finish it with, I spotted the box of FamoWood Glaze Coat two-part epoxy. I originally was just going to use the West stuff I use for the boat but my hardener has turned brown (doesn't impair function but won't dry clear). I always wanted to try this stuff and I figure, no problem if I screw it up in the garden shed.

After sanding it down to 320 grit, I coated it (as recommended) with some water-based minwax poly. Then I mixed up the stuff which takes 12 minutes of stirring. With great trepidation I poured the stuff out on the countertop and started spreading it around with a plastic paint putty knife (what they show in the picture). It actually wasn't that bad. They say to attack any bubbles with a torch and again, that wasn't as bad as I thought it was gong to be. The biggest problem is spotting them given the poor lighting in shed. But I figure that works in my favor if I missed any.

All in all, not too hard. I'll see what it looks like tomorrow after it sets up.

Ken
Staff member
Corporate Member
Yes, A pic of the finished product would be good.
R

Roy
Senior User
Ron, do you get a build-up with the epoxy? 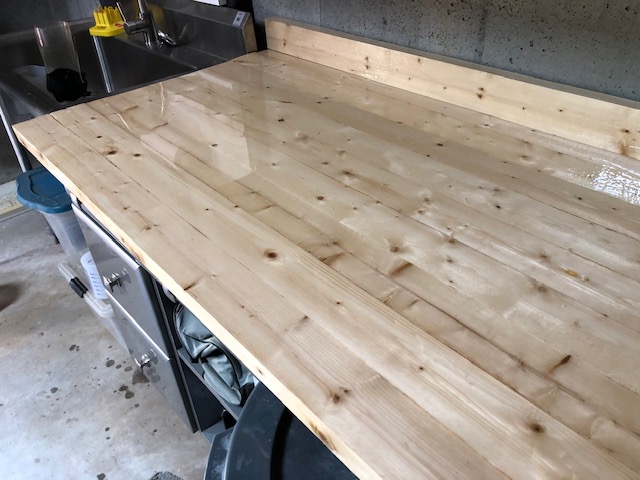 Put better light in the room. This room is fairly dark (the camera makes it look brighter than it is. The only light comes from the open door and a small light fixture. Almost every defect can be attributed to the fact that I just couldn't see them in the light I was working on. I should have worked on it somewhere else and brought it back rather than pouring it on the countertop in place. That would have solved a couple of the issues.

Getting the bubbles out with the torch was fairly easy. The only problem is I missed some toward the rear because it was just too hard to see them in the light. There are also a couple of bare spots on the right side that I just missed on the right edge. I'll mix up a little more to see if I can fix that.

The stuff is very runny. This helps it auto-level itself. While I had masking taped off things around it, I hadn't realized it was all going to run eventually into the sink while curing. The good news is it doesn't stick at all to stainless steel, so this big hunk of epoxy just peeled right off in one piece.

It works really well on horizontal surfaces (i.e., the countertop itself). Painting the vertical surfaces (the front edge of the counter) looks OK, but doesn't come across as well as the horizontal stuff. This is not unexpected I guess. Normally when painting with epoxy (use it on the boat a lot), you make lots of real thin coats rather than one real thick coat. Even then "tipping it out" is sort of an art form. The back splash (another 2x4) was painted with a brush as well elsewhere. I'm going to silicone it down.