Chris
Corporate Member
Just finished a gut and remodel of our basement and stairs. The last part was the top of the stem wall at the stair turn. The idea surfaced in the family for a live edge slab so I went to see Glenn at GPS Hardwood (great guy, beautiful wood both slabs and s2s). Found our perfect slab for the space.
Here it is the potential space before slab. (Funny insulation foam pattern is 2 component spray closed cell foam the canned closed cell to fix some voids.) 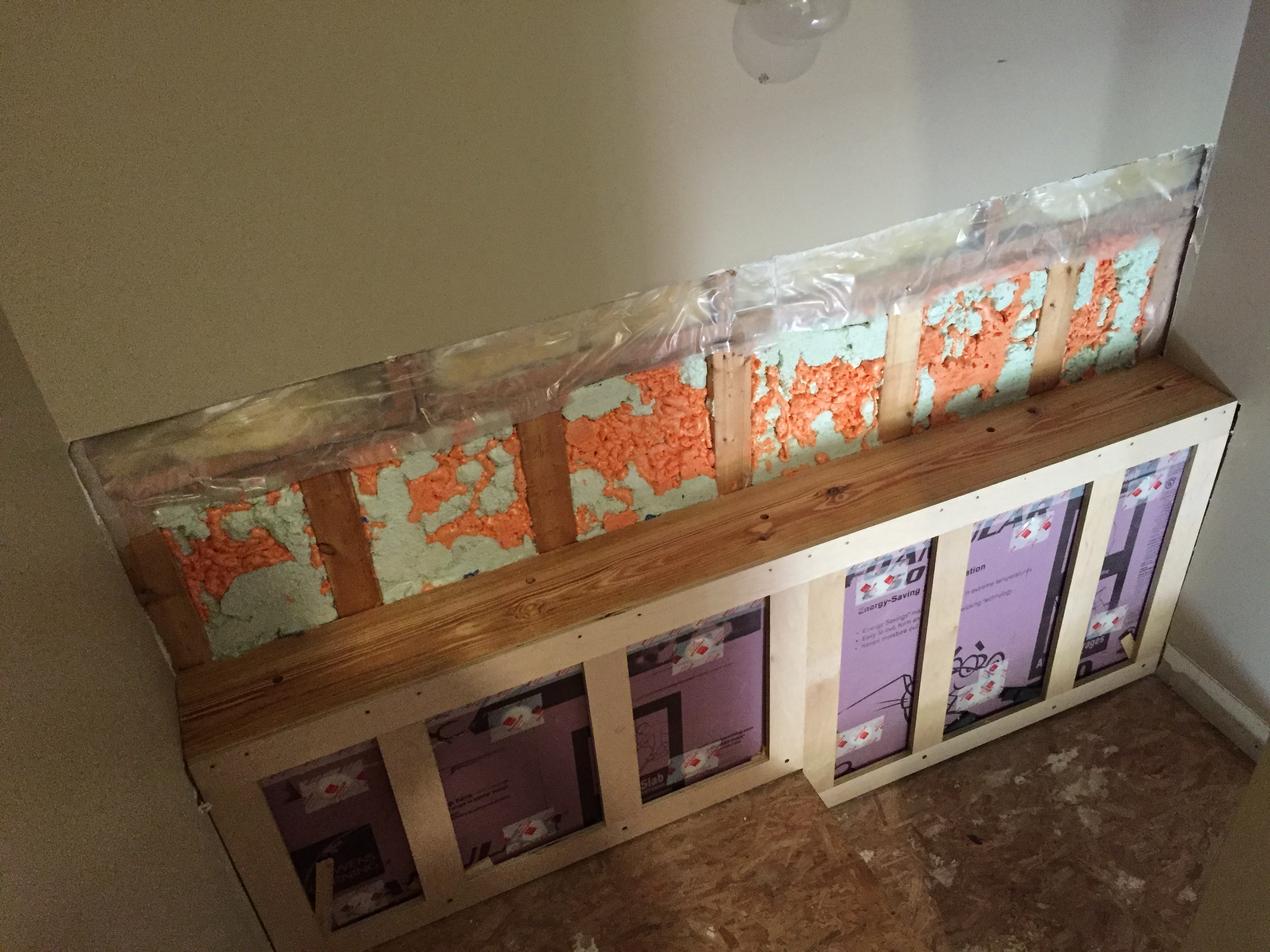 Here is the “rough” slab from Glenn at GPS. It was similar in moisture content to my dry shop wood but I let it sit in the space for a couple months. 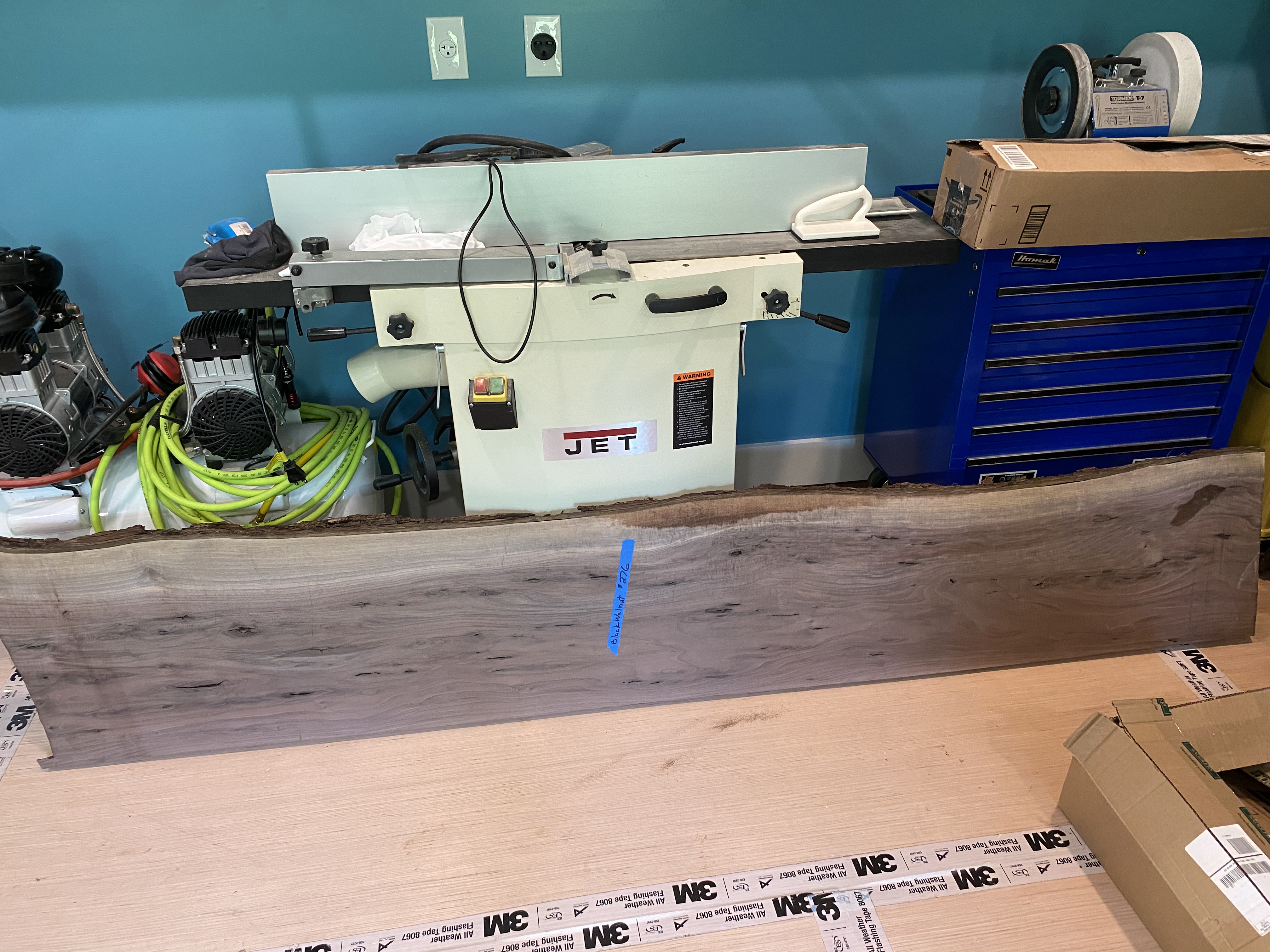 Chris
Corporate Member
Now for the flattening and sizing.
I started by flattening the slab and found the opportunity to do this many times!
plan A was hand planes: 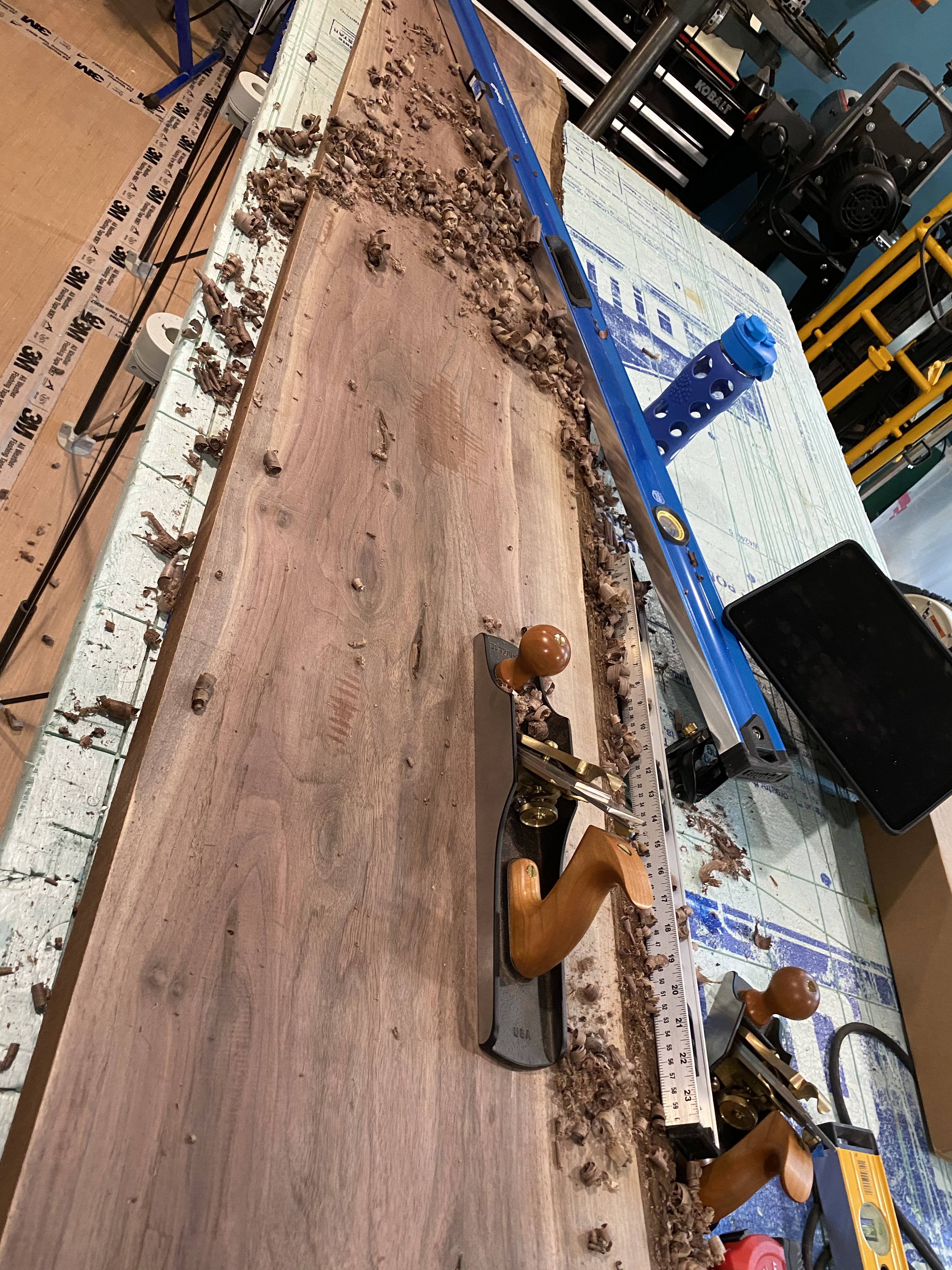 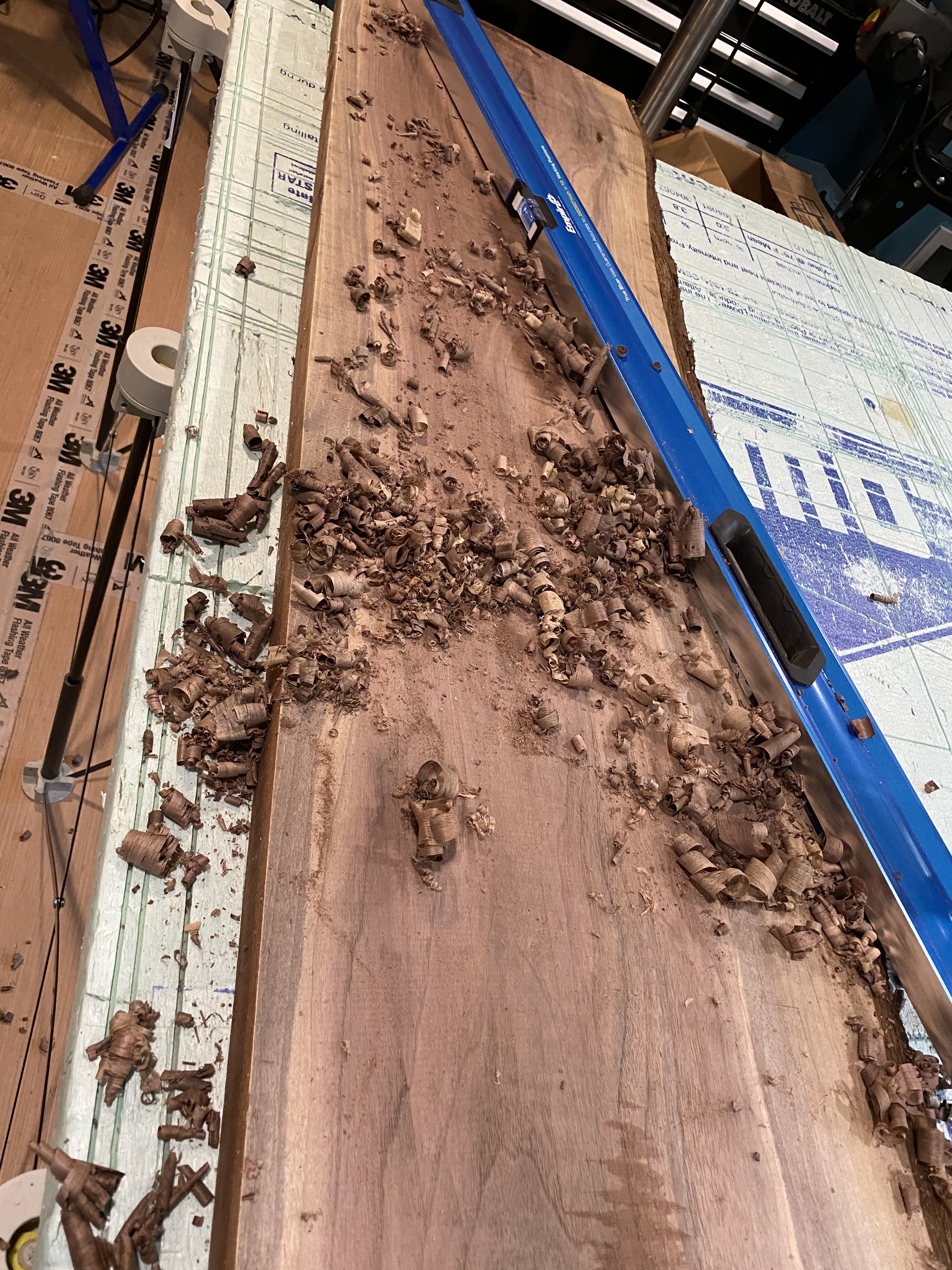 so the hand planes worked great, but boy that was a lot of work. I just couldn’t manage the work so on to plan B.....

Chris
Corporate Member
On to the router planing sled.
i created the jig for the router sled based on many available basic plans. Really meant as a one off: 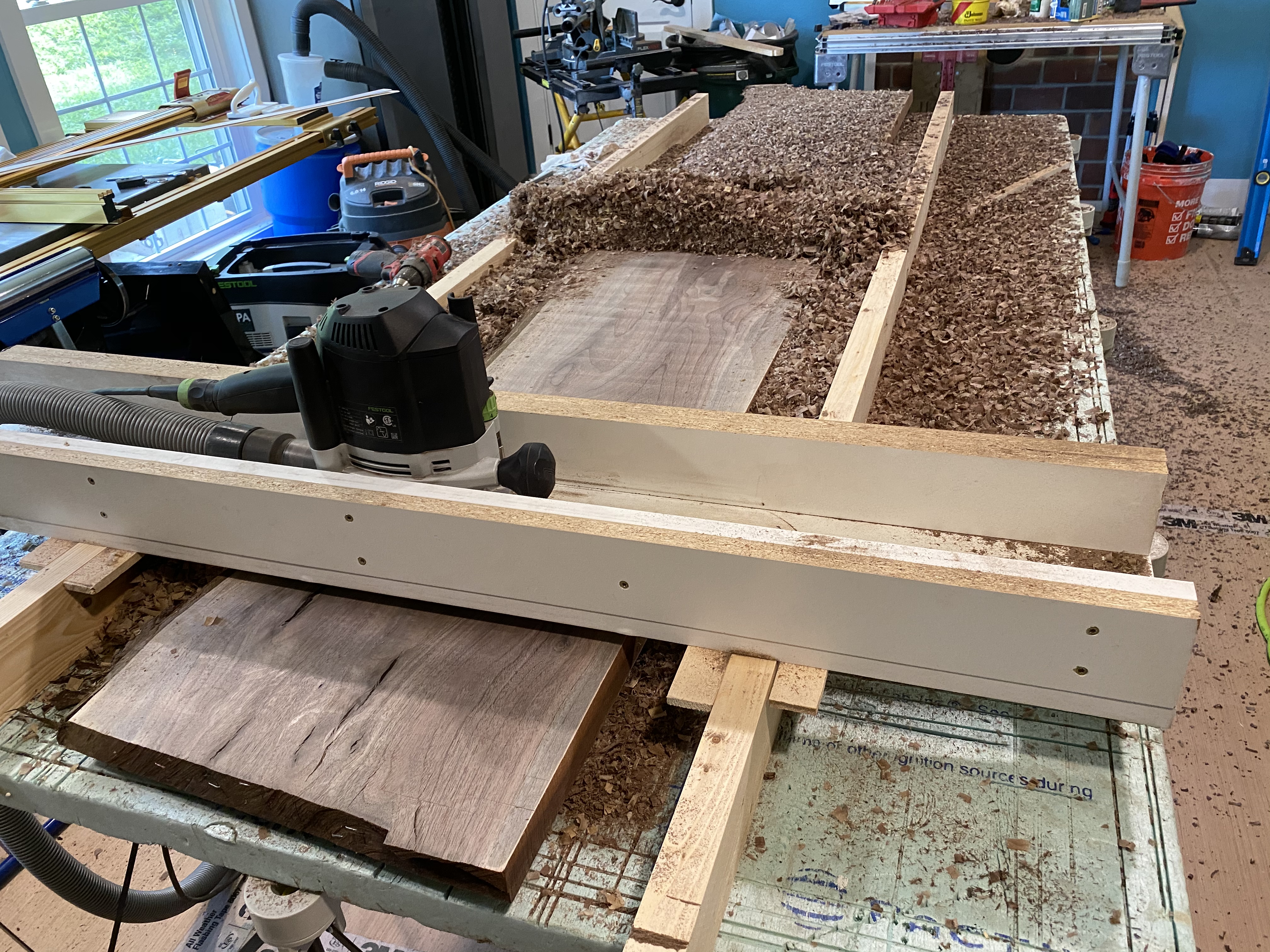 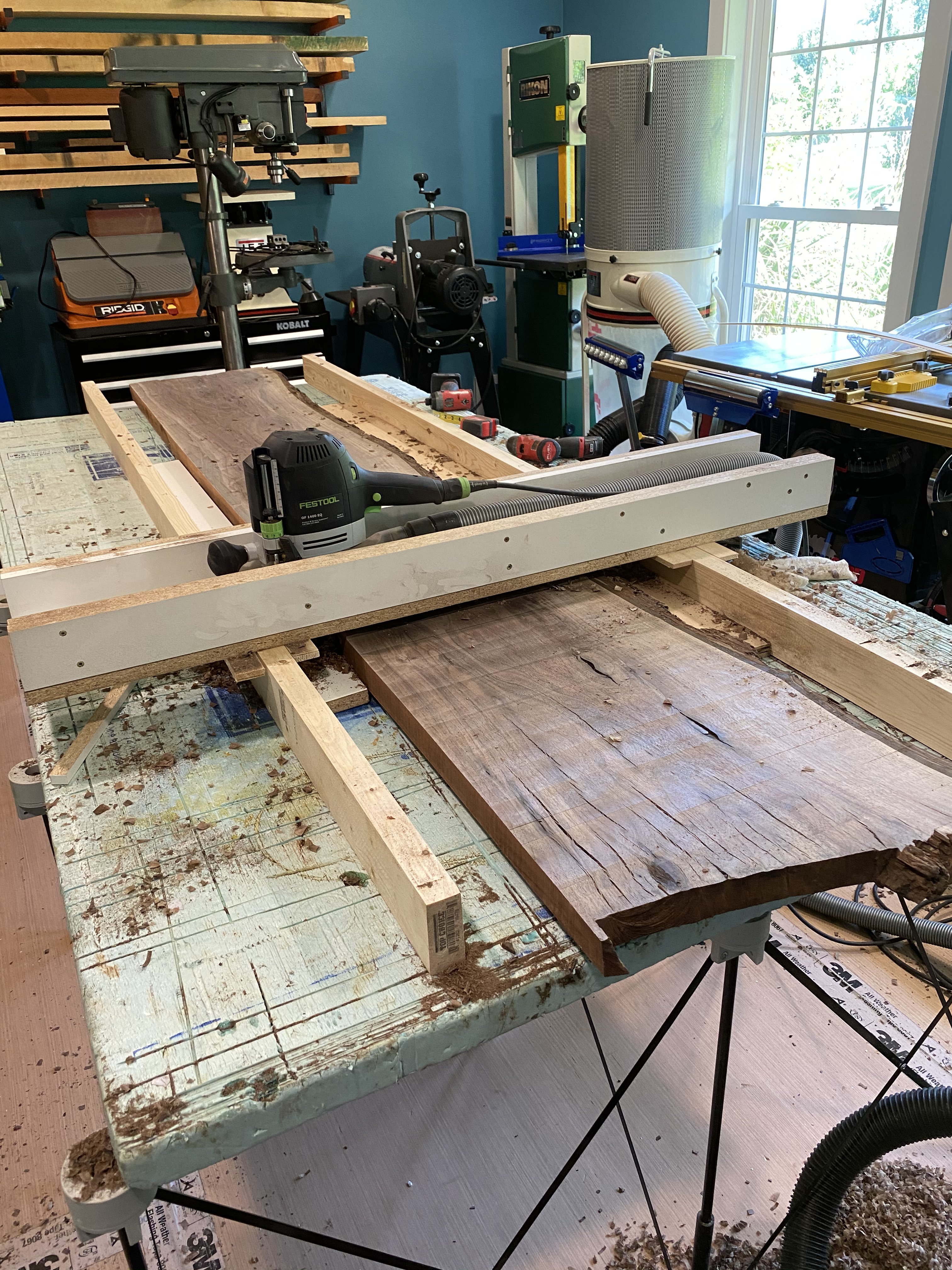 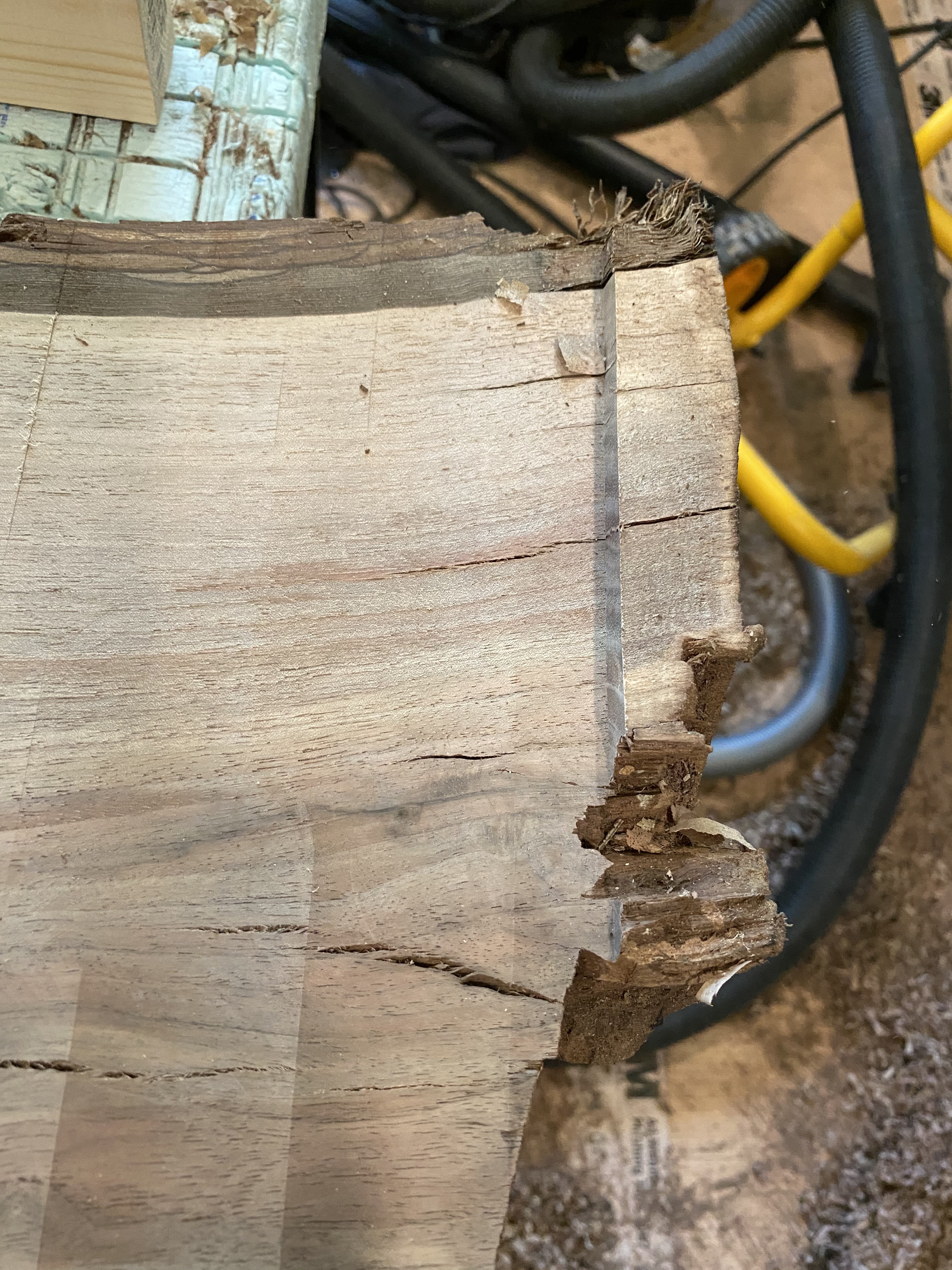 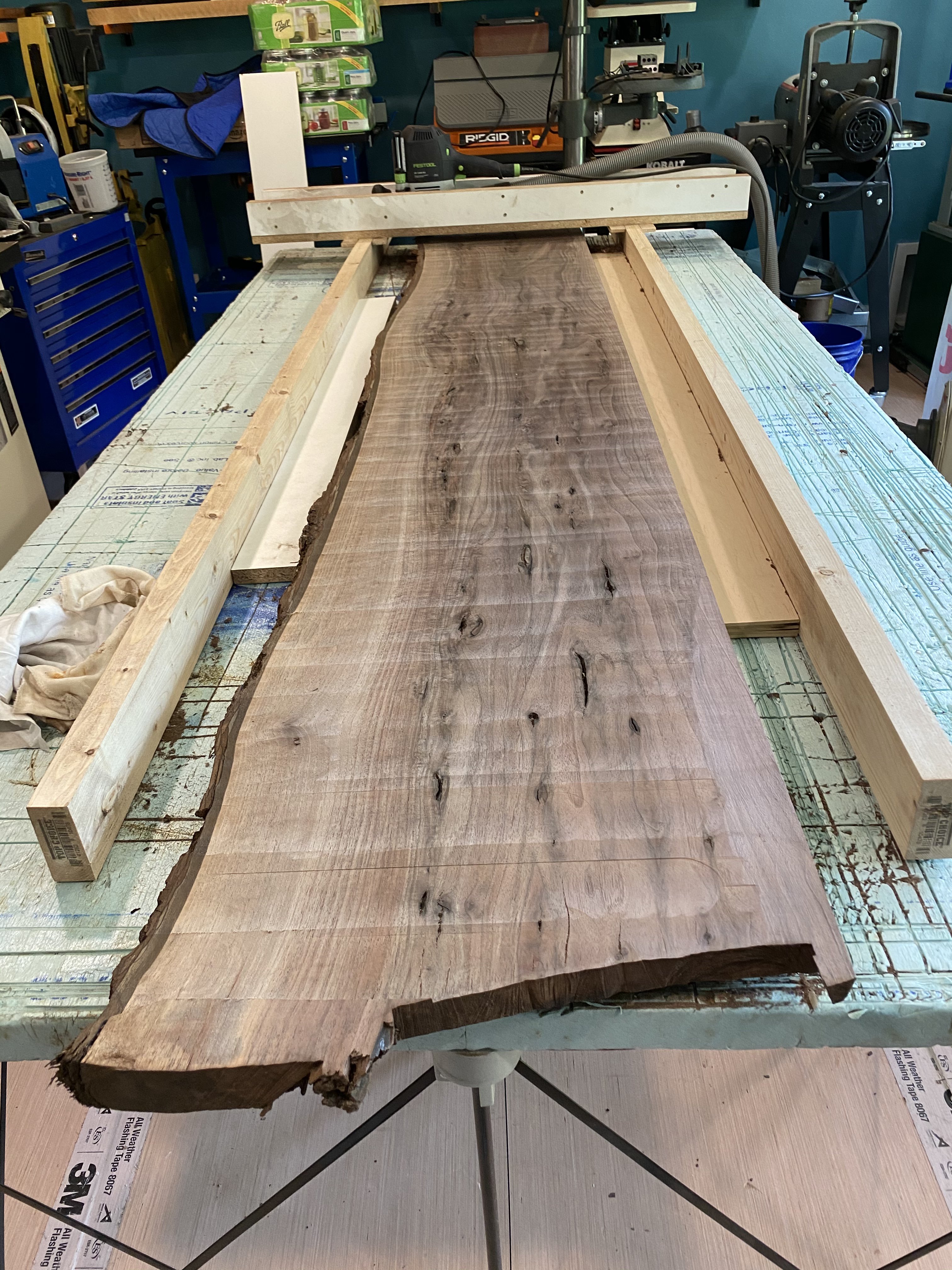 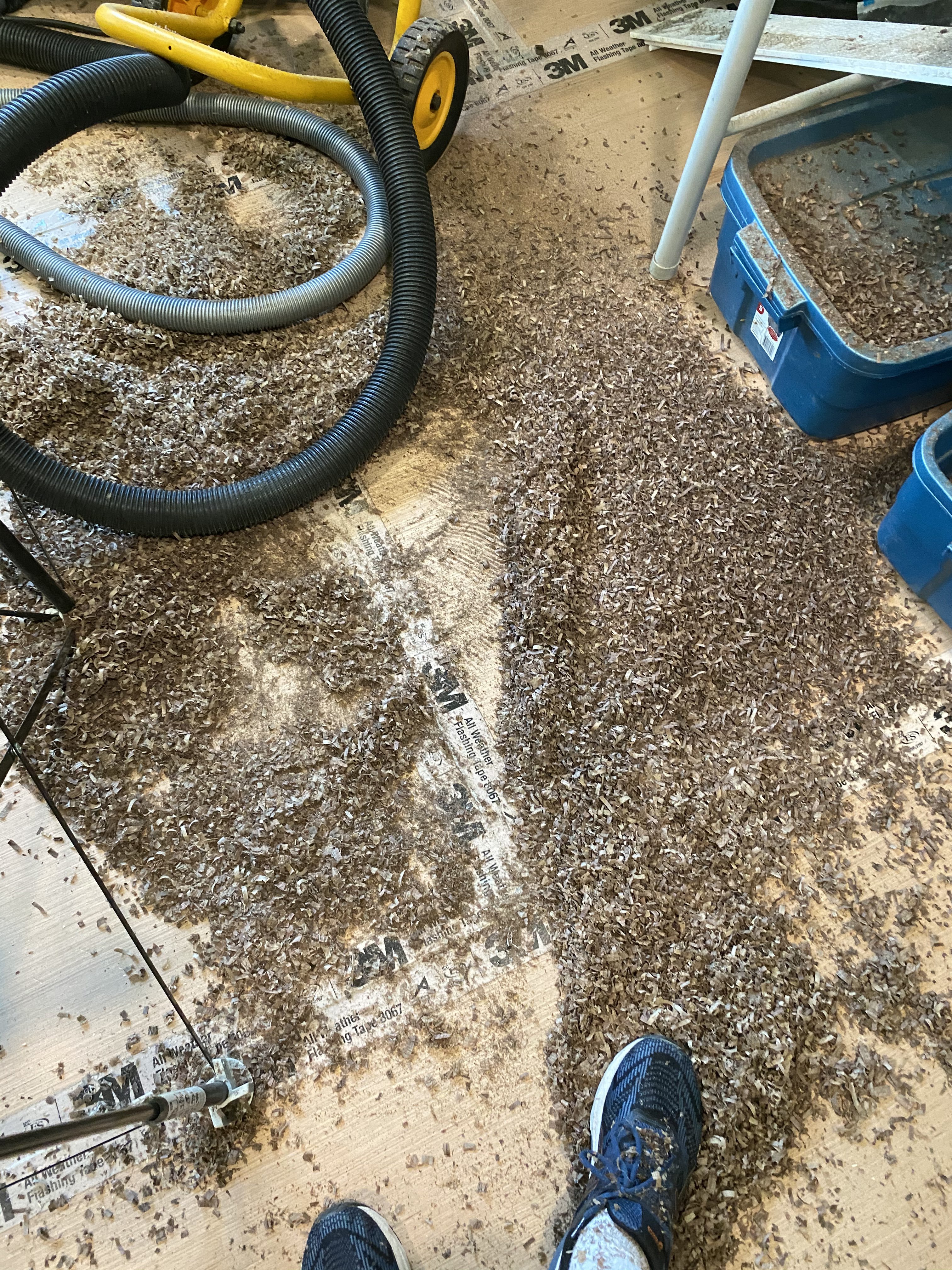 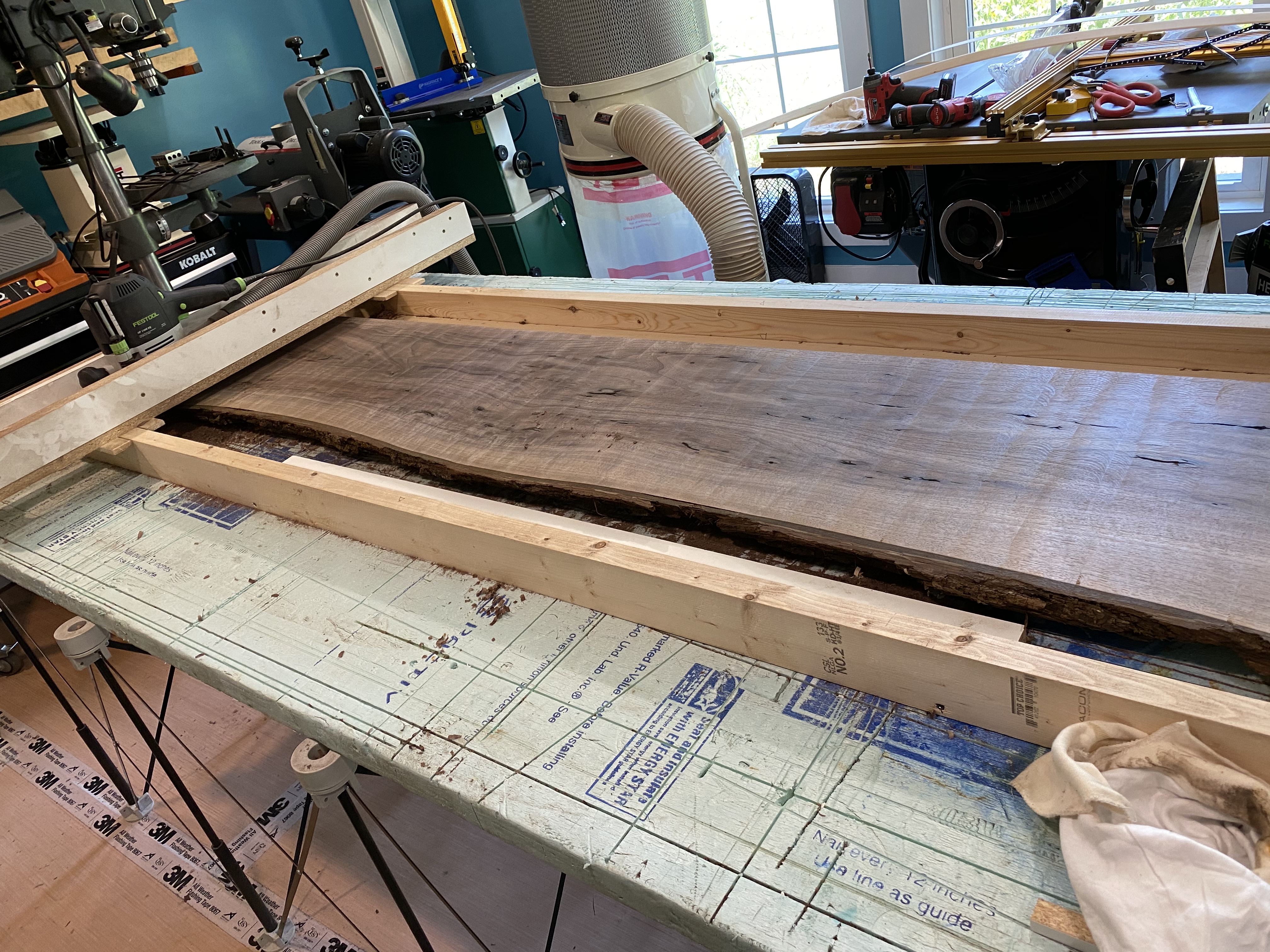 materials for the jig: melamine board, pine runners flattened “just in time“ with jointer and table saw (moisture content too high to expect durably flat surface)

What I experienced:
1) Big mess. Everybody says this and it’s true. I had dust collection on the router and a 4” hose rigged to the jig to my dust collector and still wound up with the shavings shown. Not a big deal if you expect it and protect yourself.
2) the flattening bit on the router leaves visible tracks that are greater in appearance than in physical irregularity, even with overlapping passes. Still need to manage that before finish but it looks worse than it is.
3) I meticulously checked for a flat surface at the day’s end only to find the wood had moved overnight. Lots of possible causes but I chose to judiciously repeat the process until I could get a stable flat surface. I did frequently assure jig and runners were flat both in use and at rest. Maybe three to five days of re-surfacing? another option would have been to wait more time and then repeat. Luckily my plan worked out.

I modified a stair cutting jig to translate measurement of space side to side. Irregularities in drywall accounted for by modifying the rotating ends of the stair jig.
i measured front to back with an overhang for the other dimension. (no pics).
the slab would slide in against drywall on the sides and under drywall in the back.
Finish drywall in the back would be undercut using the slab to mark and an oscillating saw to cut the drywall.

Chris
Corporate Member
On the edge:
Everyone in the family wanted the bark on except me, so the bark was to stay. First part of execution was to wait a couple months and assess the bark resilience over time. I neglected to ask Glenn what time of year the walnut was harvested, which would be the thing to do. By the time of install, the bark withstood my full weight without suggestion of delamination.
i also planned a failure mode by leaving enough overhang to remove bark back to sapwood should the bark adherence later fail.

Finish:
Waterlox original. I have familiarity, it is a perfect marriage wih walnut, and I’d seen it described to stabilize bark. On the edge, I soaked the bark until it no longer absorbed the finish (5-10 applications?). Slab top maybe 4 coats, and side/bottom enough coats to provide symmetric seal. Method of application per Woodman on YouTube,


These pics are in-process pics, so you will see irregularities. 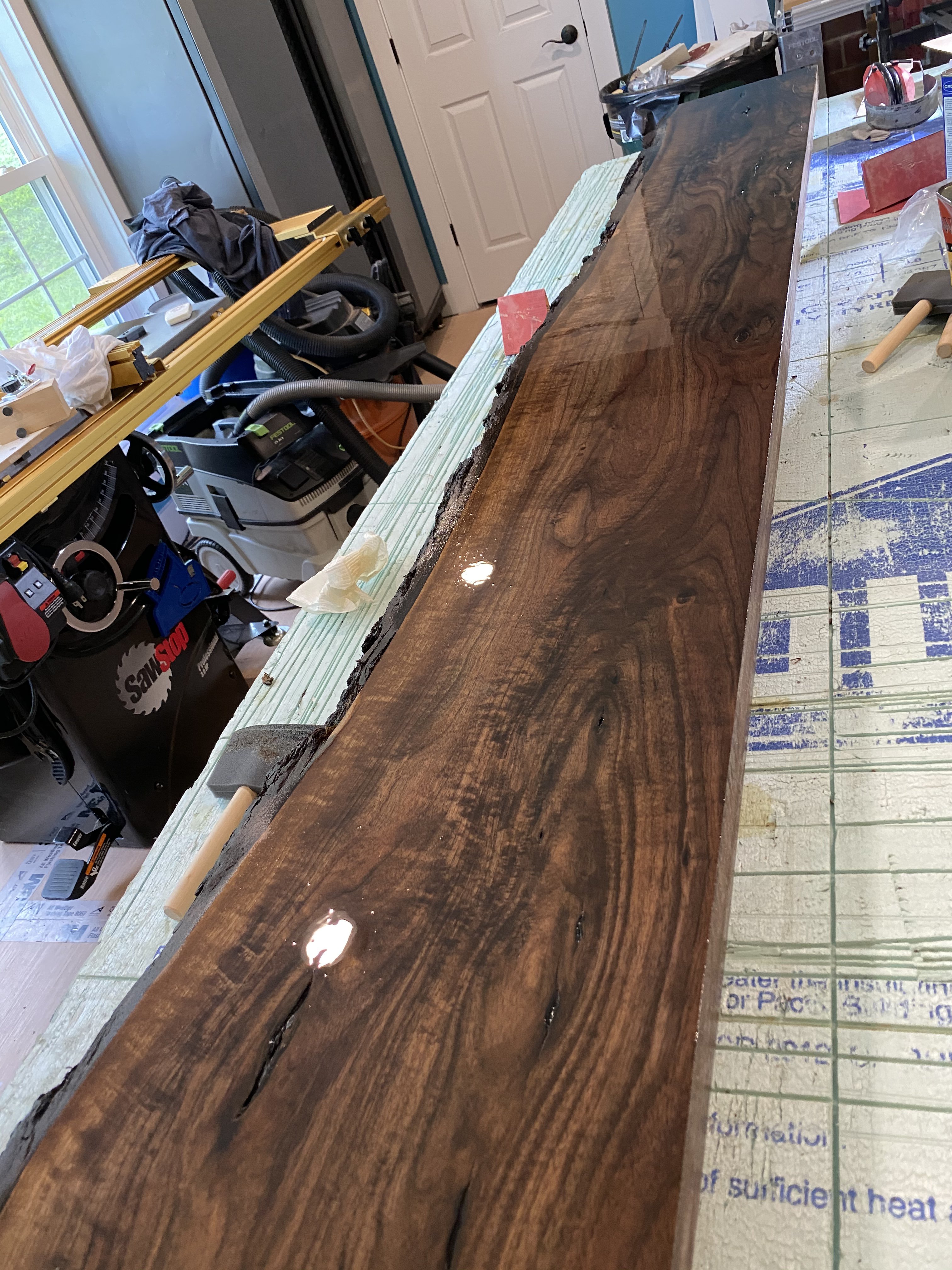 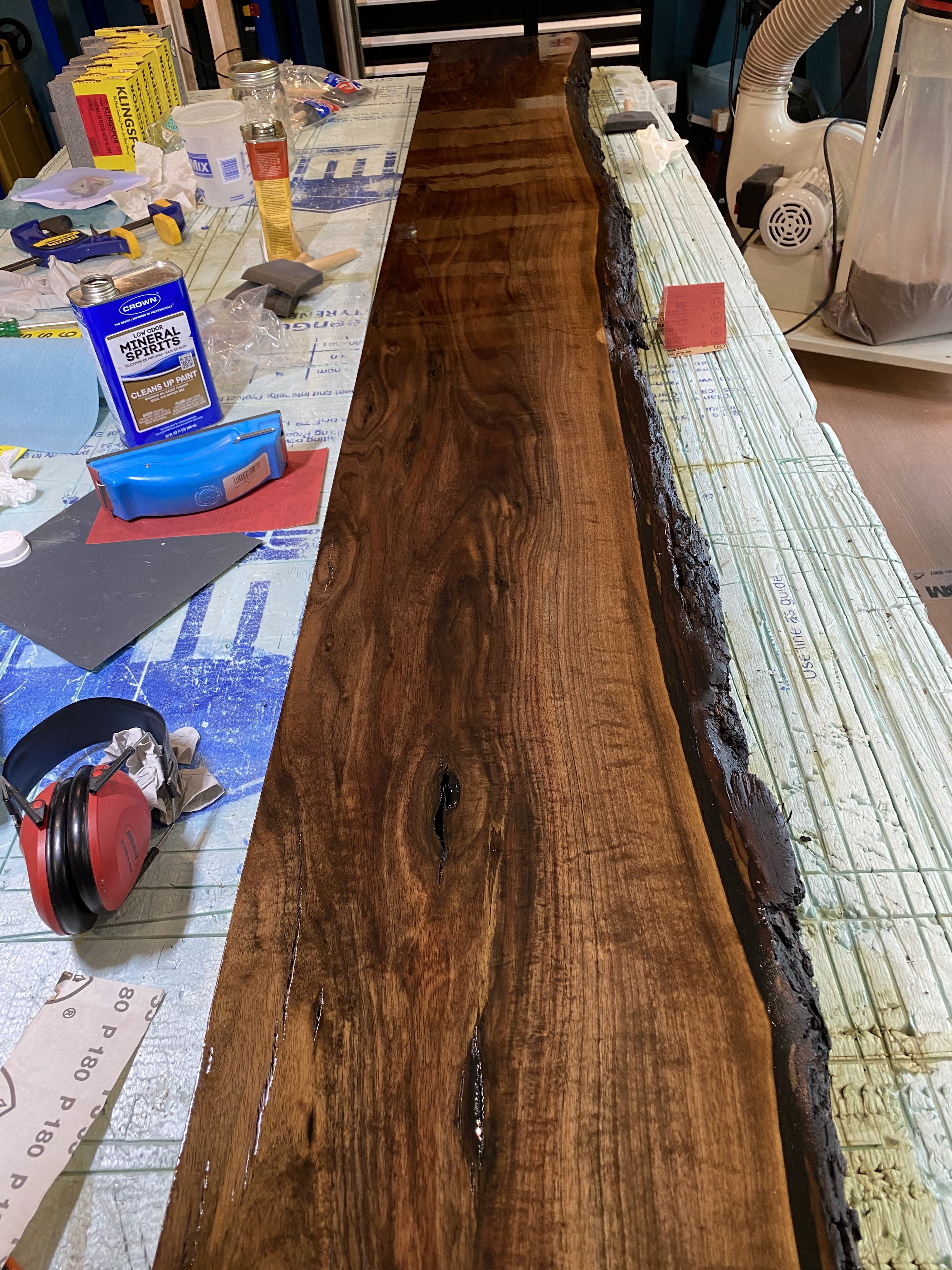 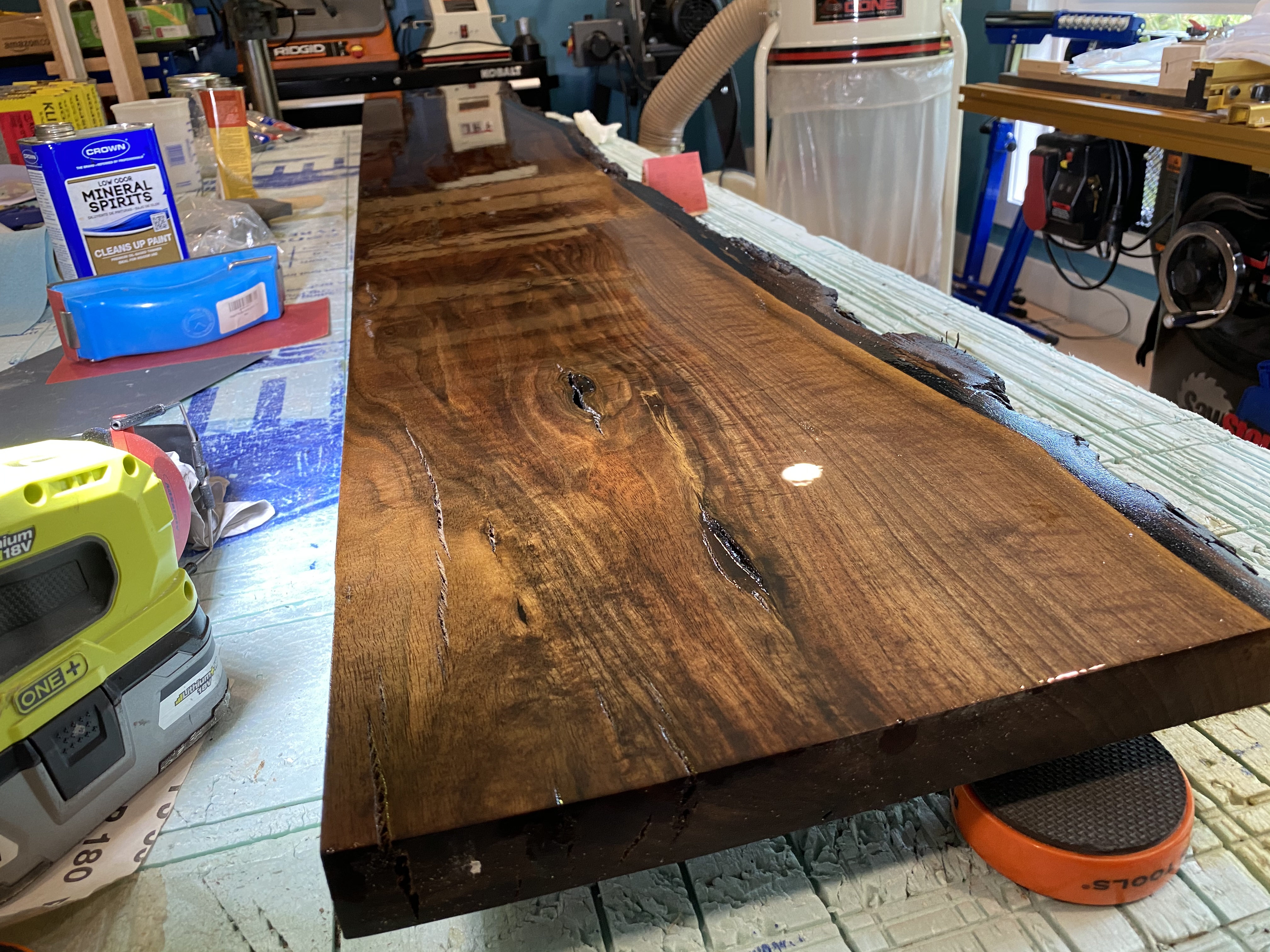 ‘although you may note lines in the finish similar to the router lines, this is differential drying and not seen in final product.
I chose not to fill any voids as this was non-structural and meant for character.

Chris
Corporate Member
Here it is installed before paint 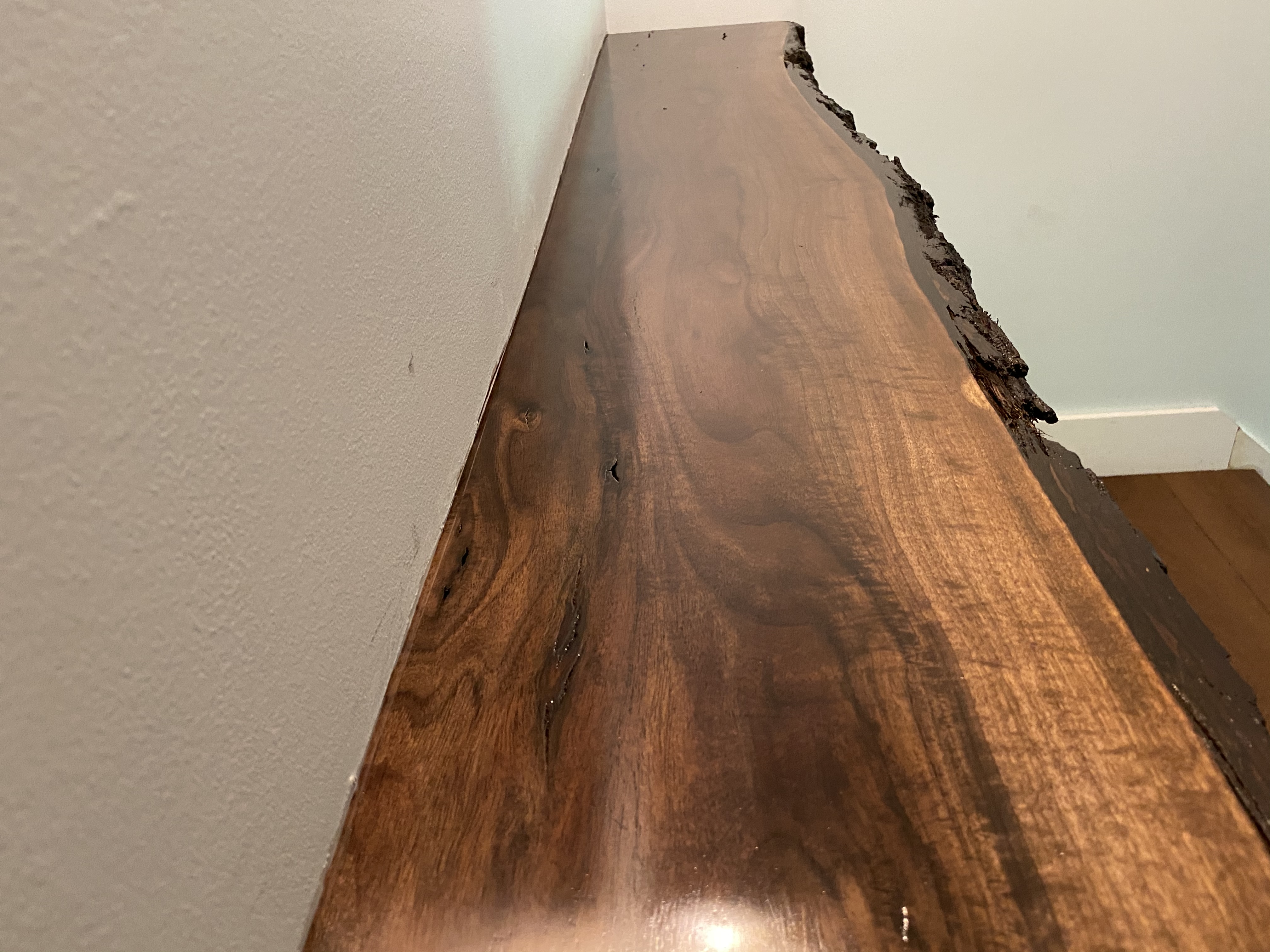 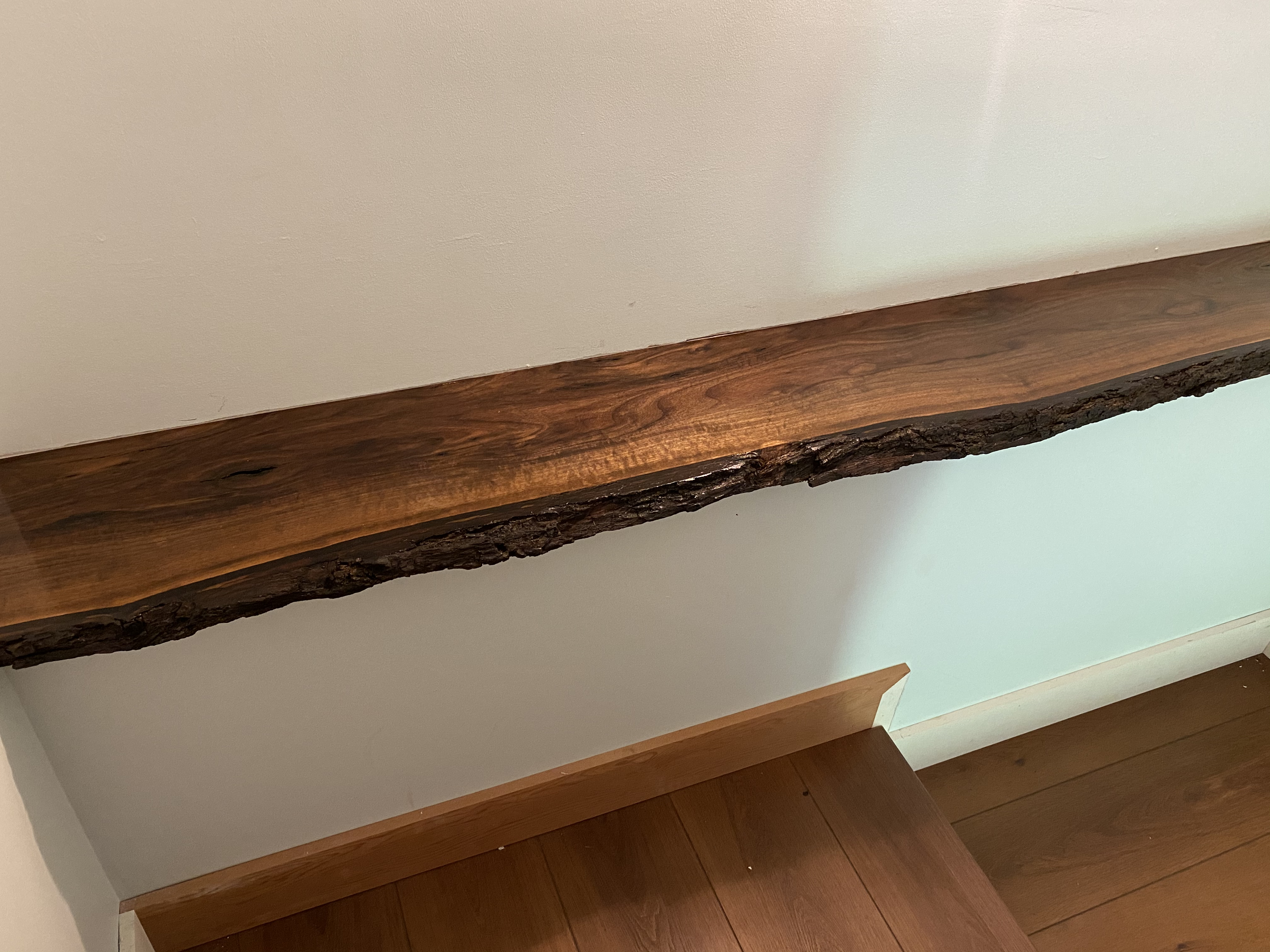 We like it. Not always a lot of love for slabs here but it fits the house and setting. Makes for a fun surprise walking down the steps.

I wanted to post detailed process pics to give some sense of how much work slab pieces can involve. Not the most work but more than slapping on some epoxy and calling it good

Thanks for looking and following along.

Matt
Corporate Member
Chris, that looks great, and thanks for the excellent documentation of the process. I'm a big fan of Waterlox, an excellent choice for this project.

Bruce Swanson
Corporate Member
A project showing fine craftsmanship and well documented--thank you for sharing with us Chris!
M

Mark
Corporate Member
That was a lot of work, but it does look good.

ShortRound
User
Really cool! I'm curious if the bark will hold up over time as it really adds a lot of character to the slab.

ShortRound84 said:
Really cool! I'm curious if the bark will hold up over time as it really adds a lot of character to the slab.
Click to expand... 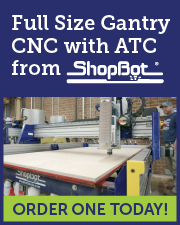 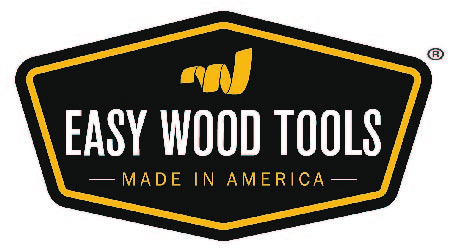