Man with many vises
User
The first prototype vise for next year’s workshop is over at Phil’s shop in beta test. I needed some wood for a second prototype vise to tweak some dimensions and finalize the build sequence.

These painted walnut cabinet doors and drawer fronts are from a kitchen decorative accent project that went south in stages. 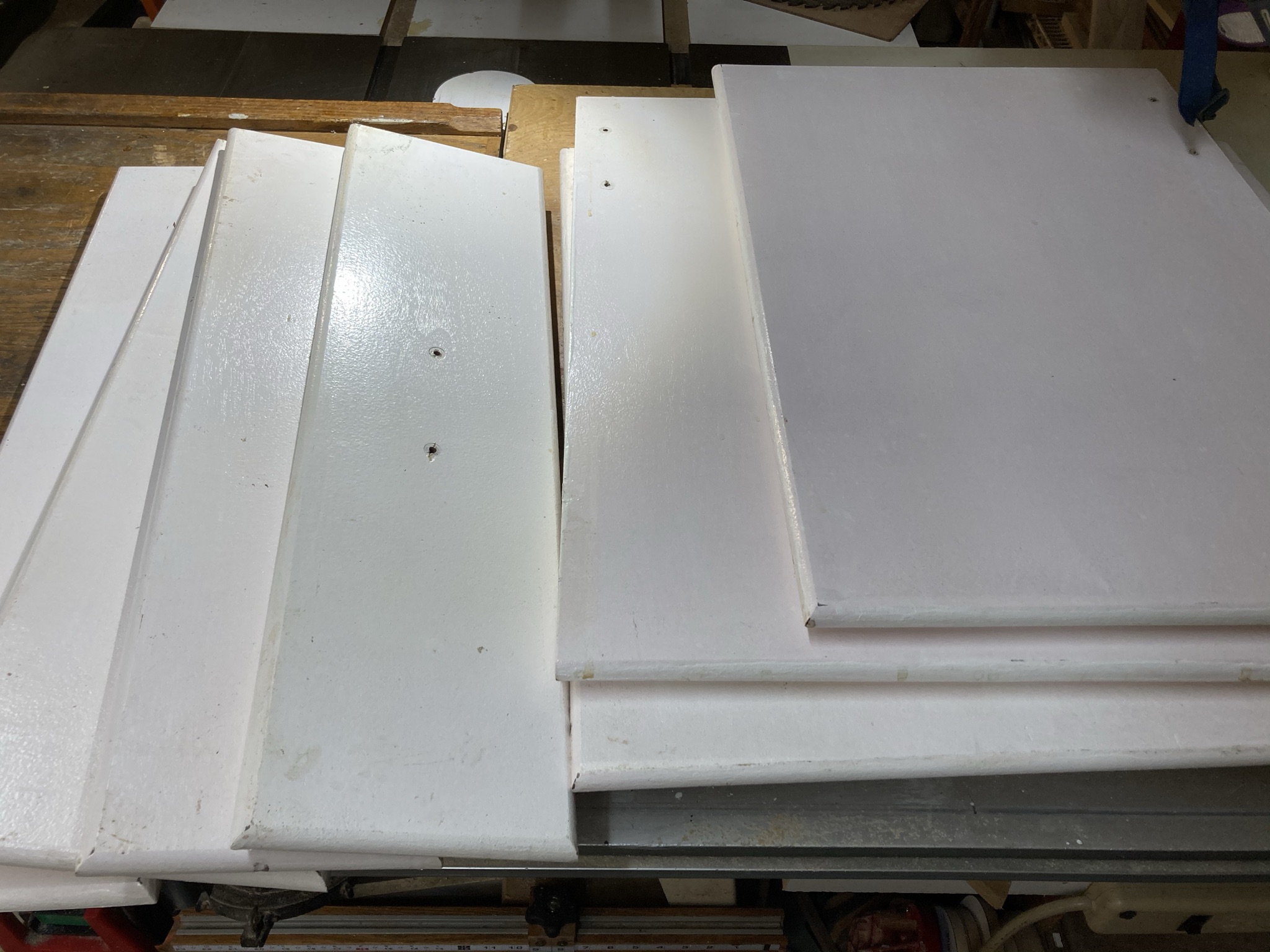 After stripping, light planing, and ripping those painted boards are now these 8/4 wide slats. 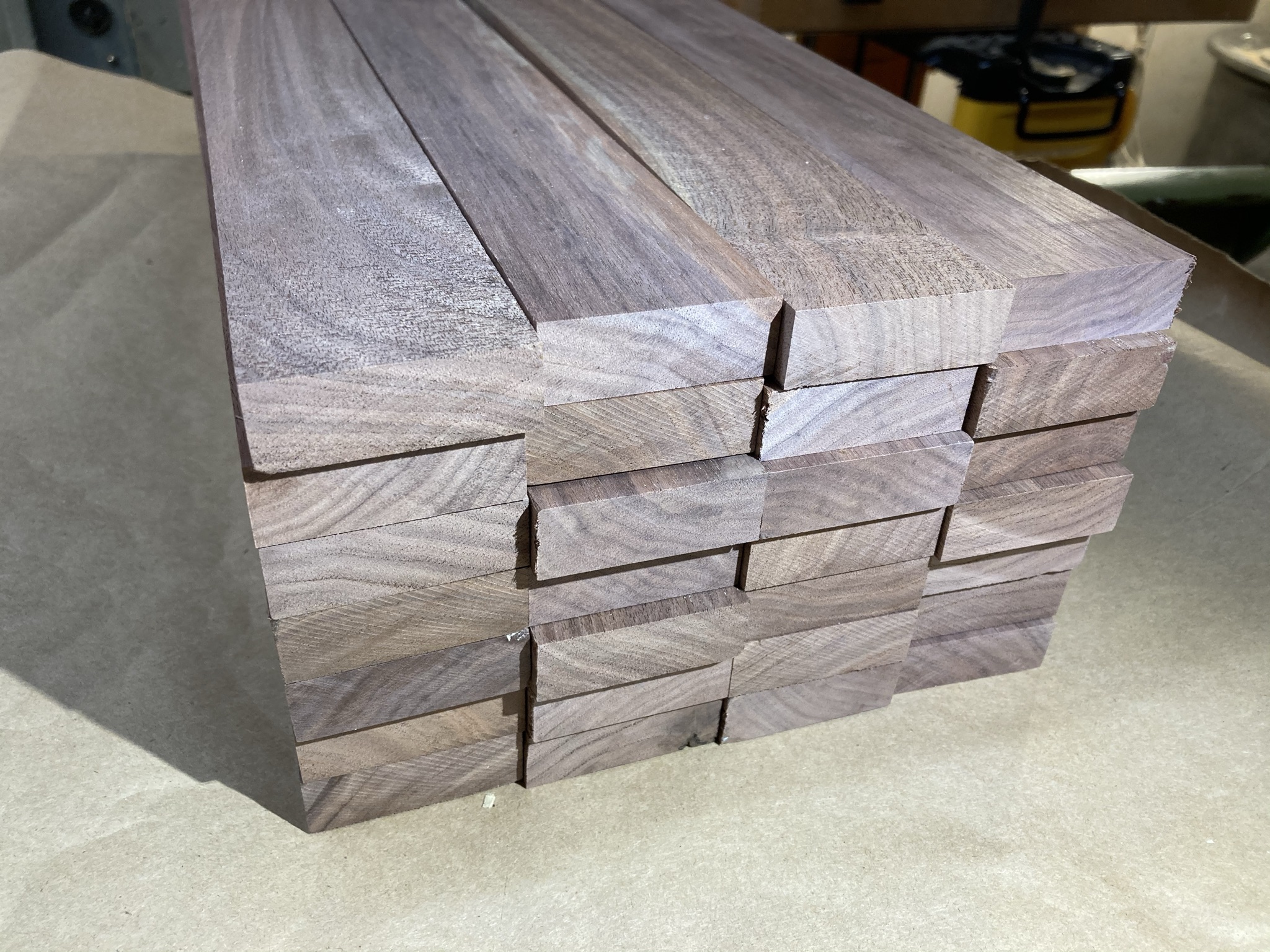 My plan is to make the wooden components for this second prototype vise by laminating these 8/4 wide slats into a chop, leg, bracket, block, handle, and hand-wheel. The mortises for the X-cross were cut into a slat as shown. Note in the workshop we will most likely make these mortises with a router in solid wood. 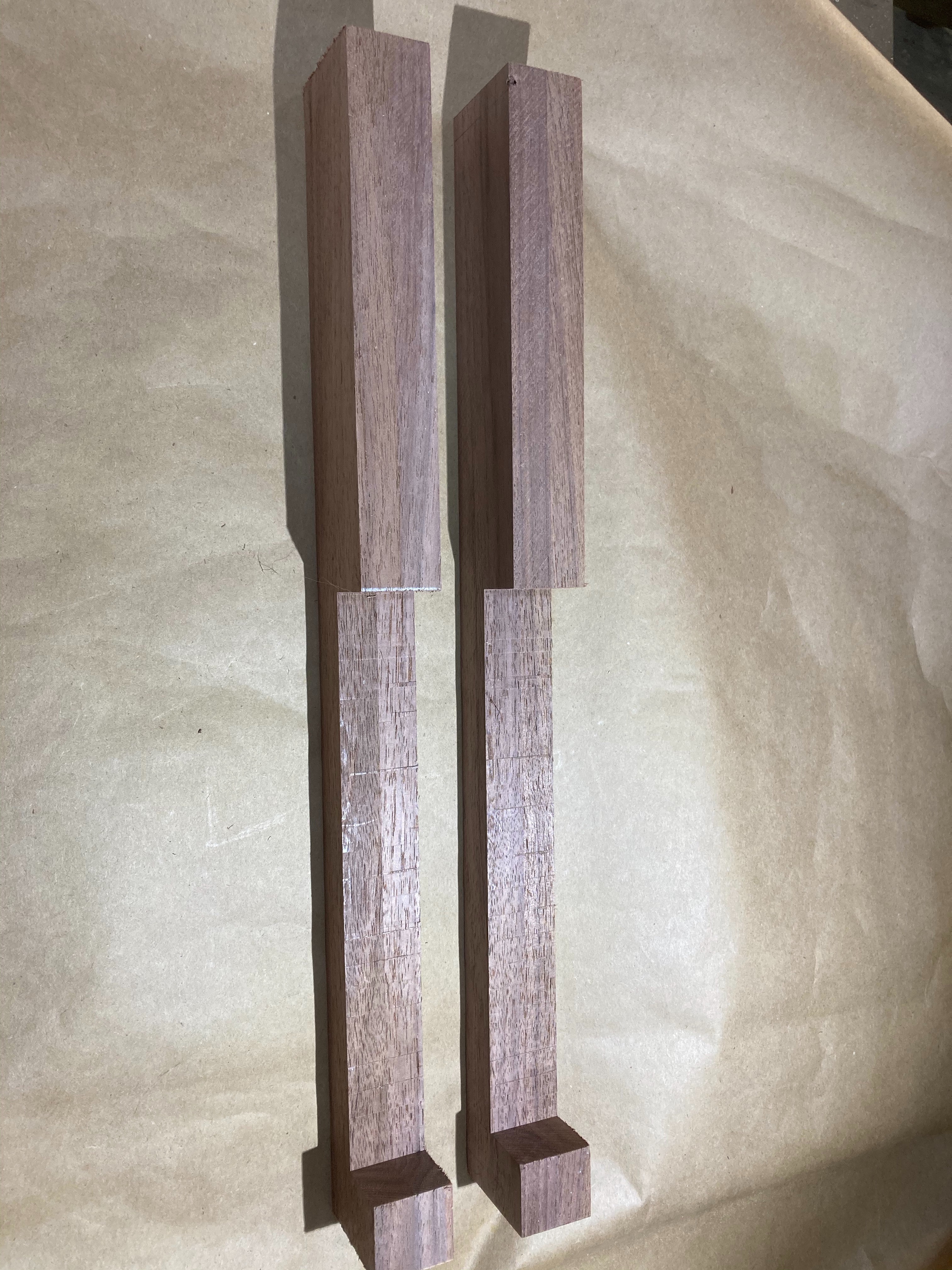 The mortise width in the chop and leg is set exactly by the width of these two slats. The mortise depth is slightly shallow and will be made exact later with a router plane.

After gluing, here are the chop and leg blanks complete with maple “racing stripes” for decoration 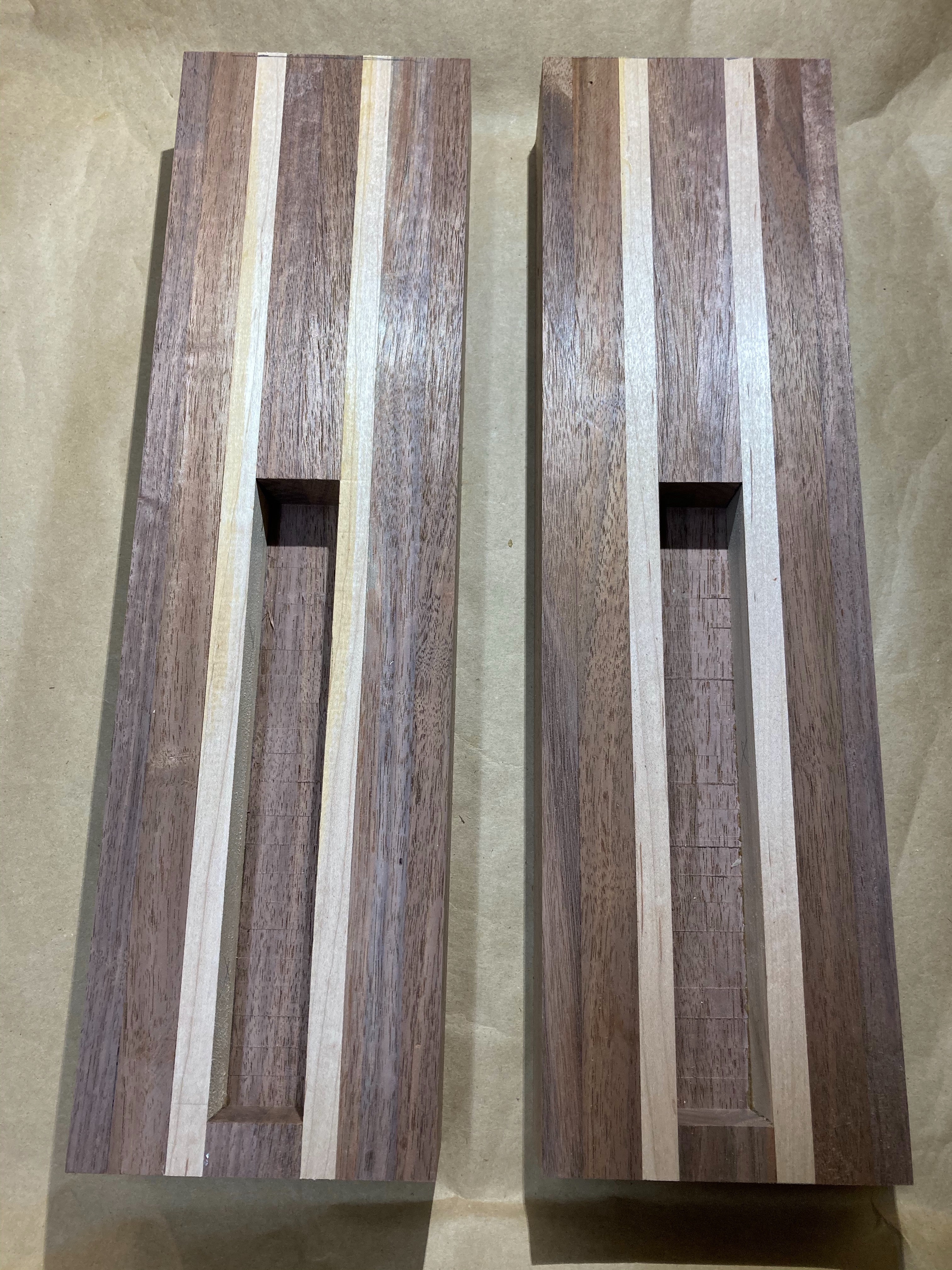 Here is the set of wooden parts for the second prototype with most of the sawing operations completed. Drilling the various holes is next and I’ll post that later. 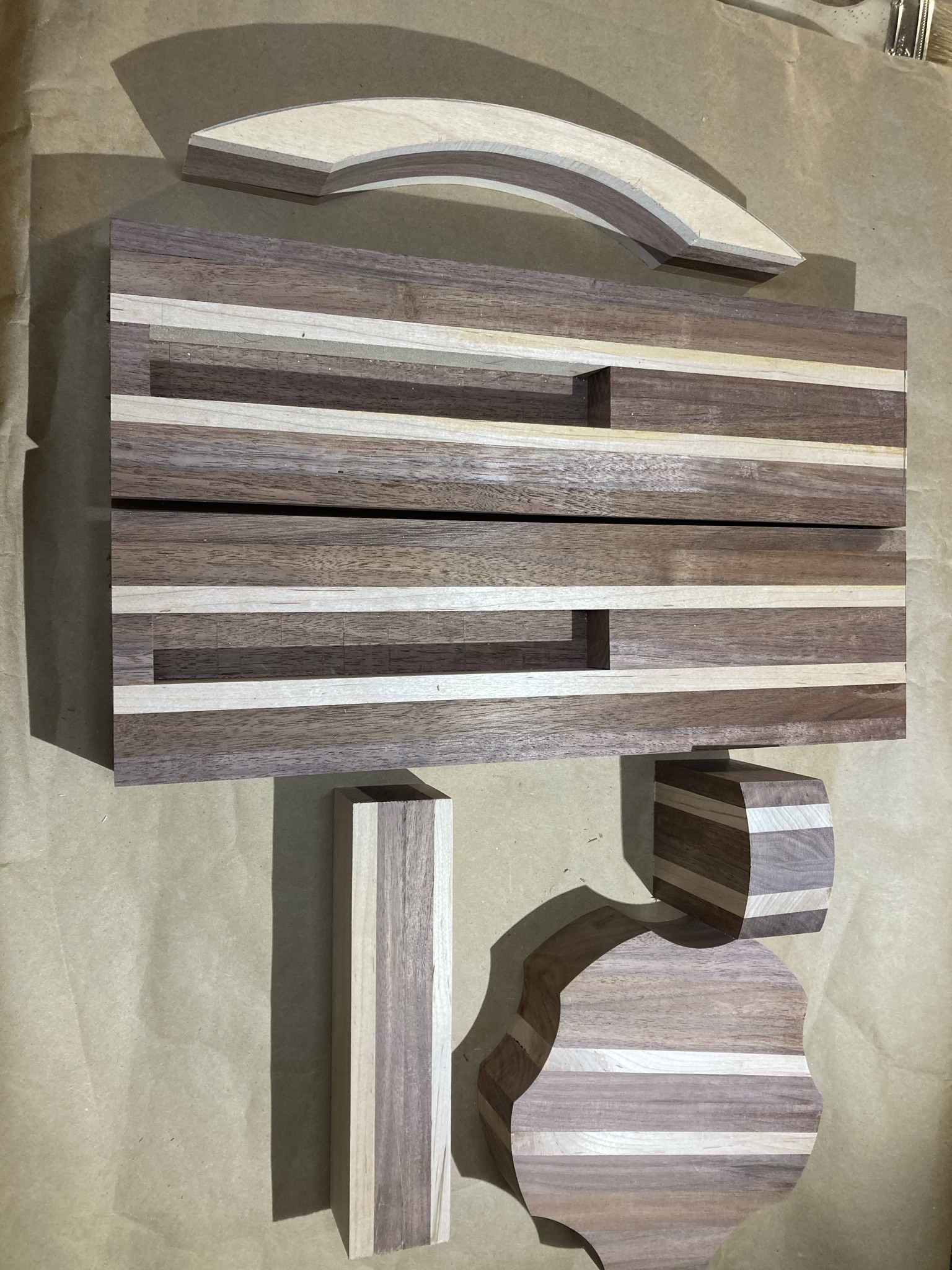 Man with many vises
User
The mortises for the cross arms start with a knife wall and a diagonal saw cut. 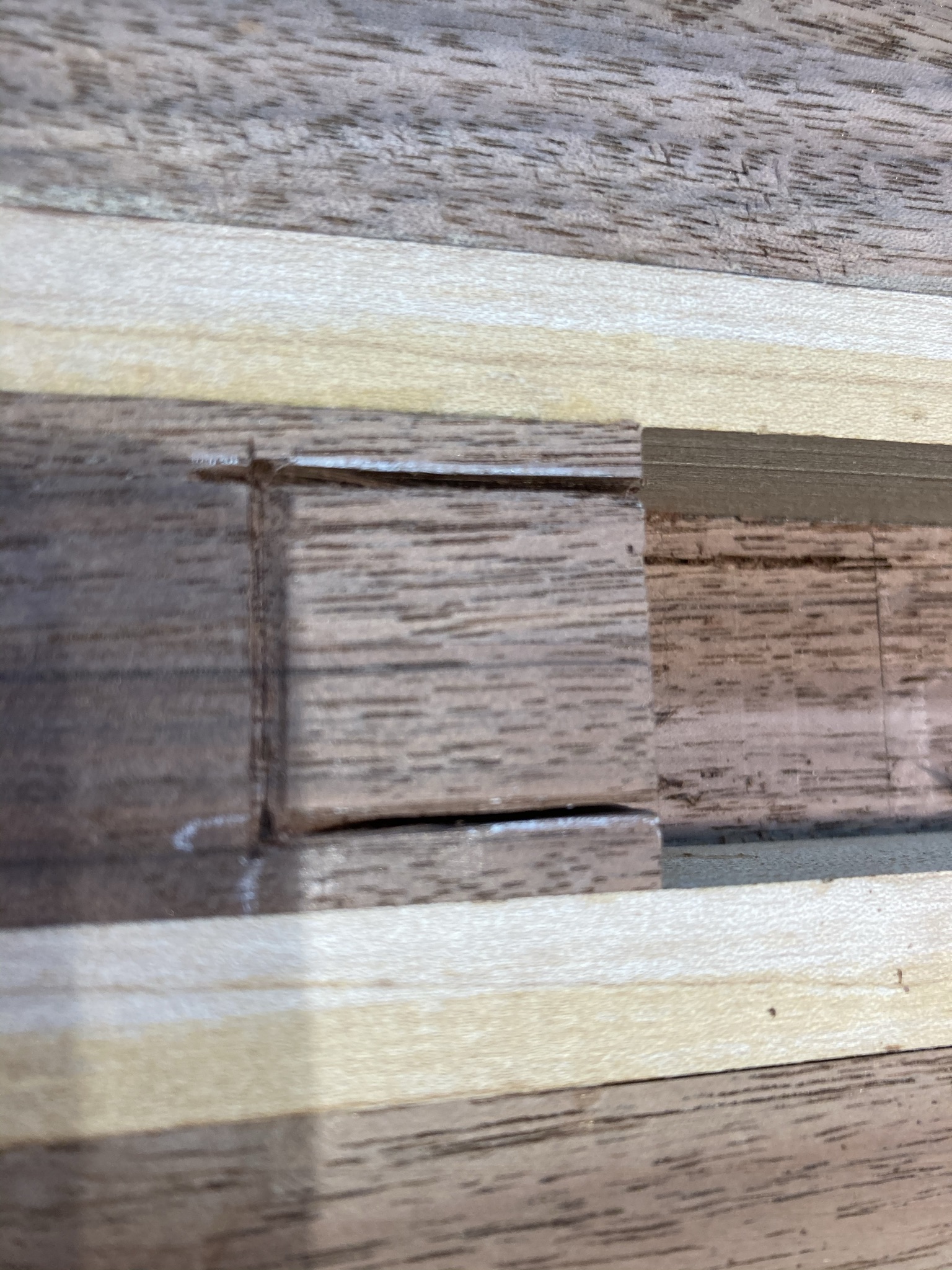 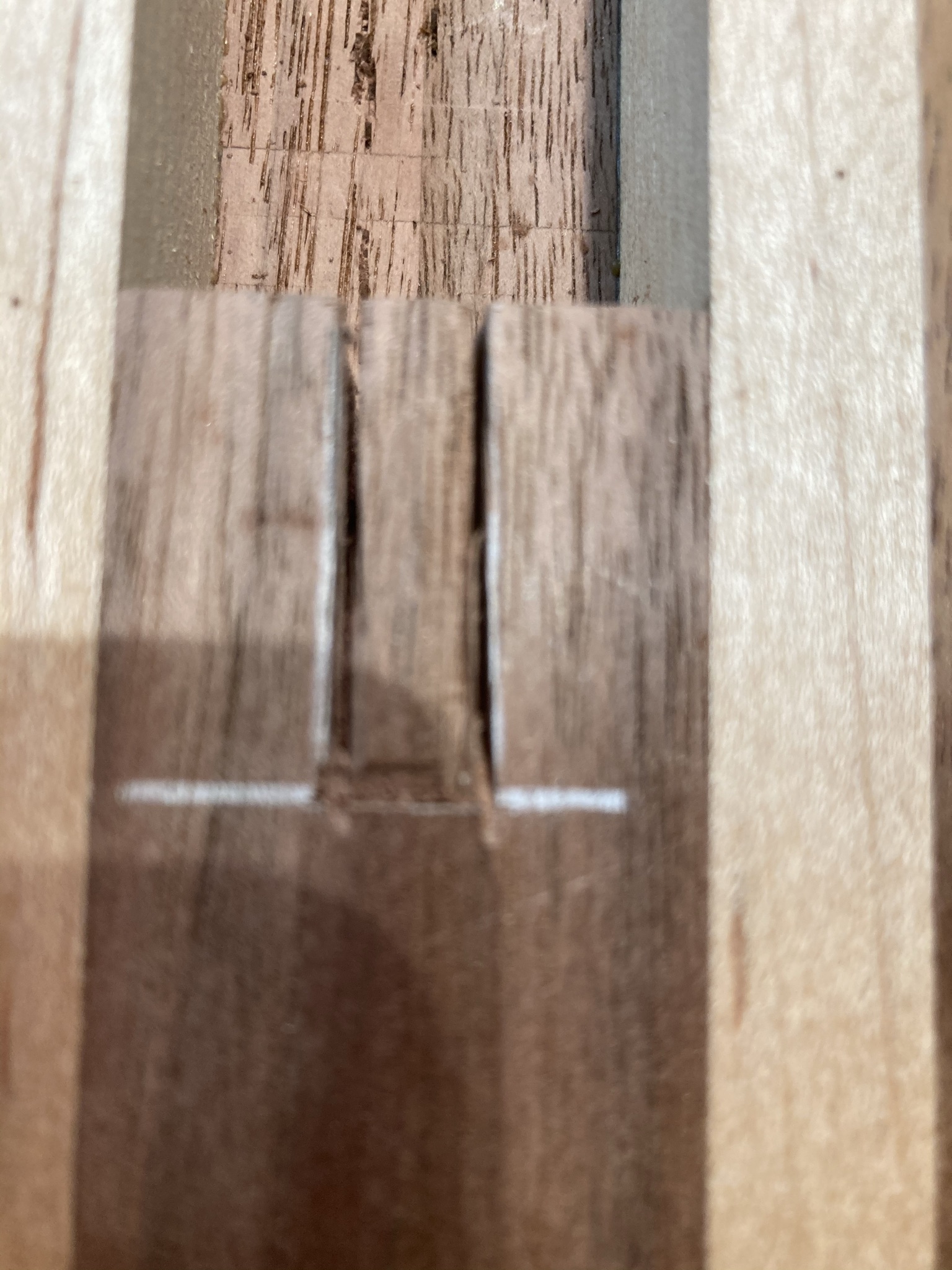 and then chopped with a chisel.

A router plane sets the exact depth of the mortises. 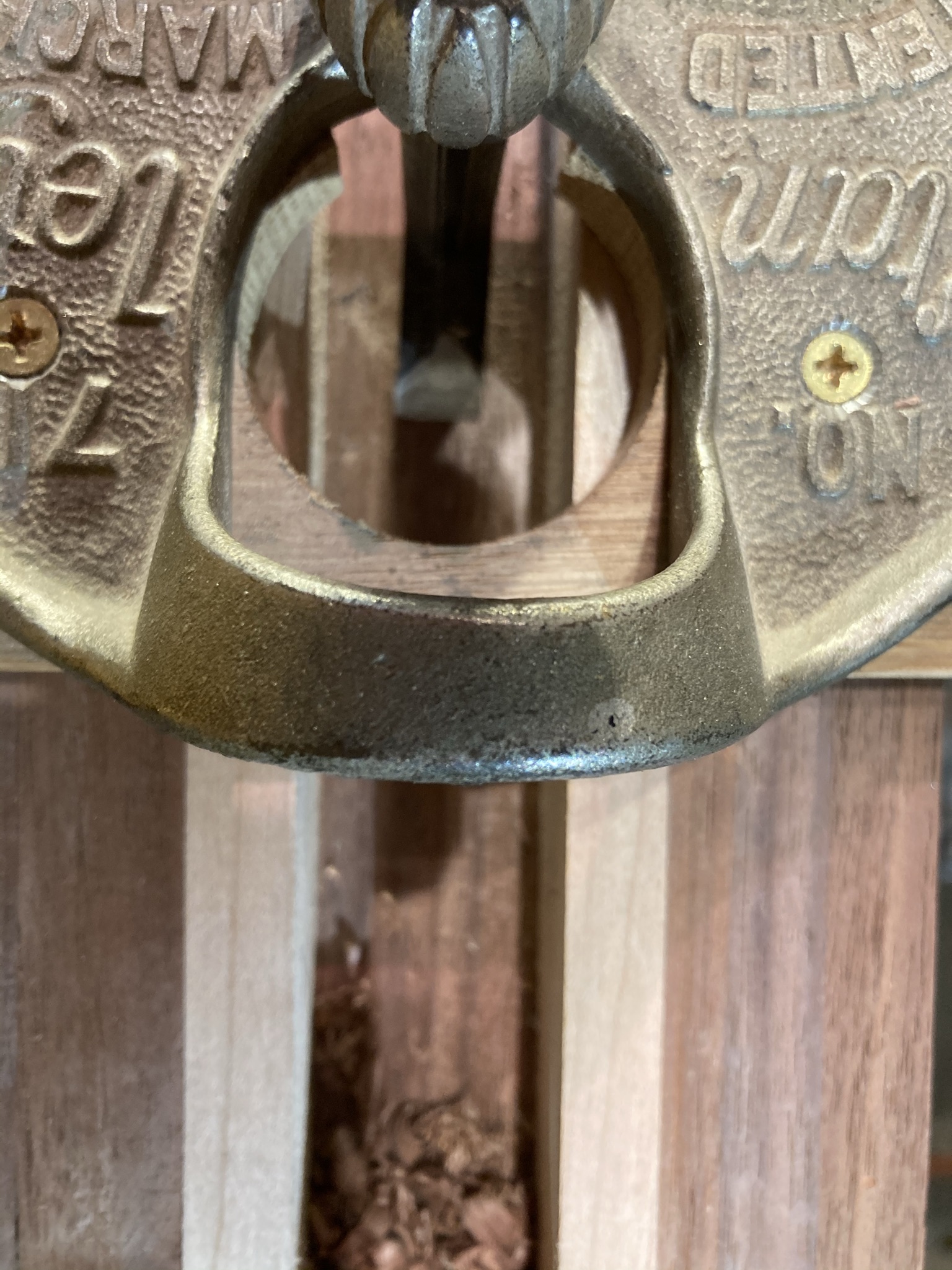 Next are the Al bearing strips to prevent the ball bearings from denting the bottom of the mortises. 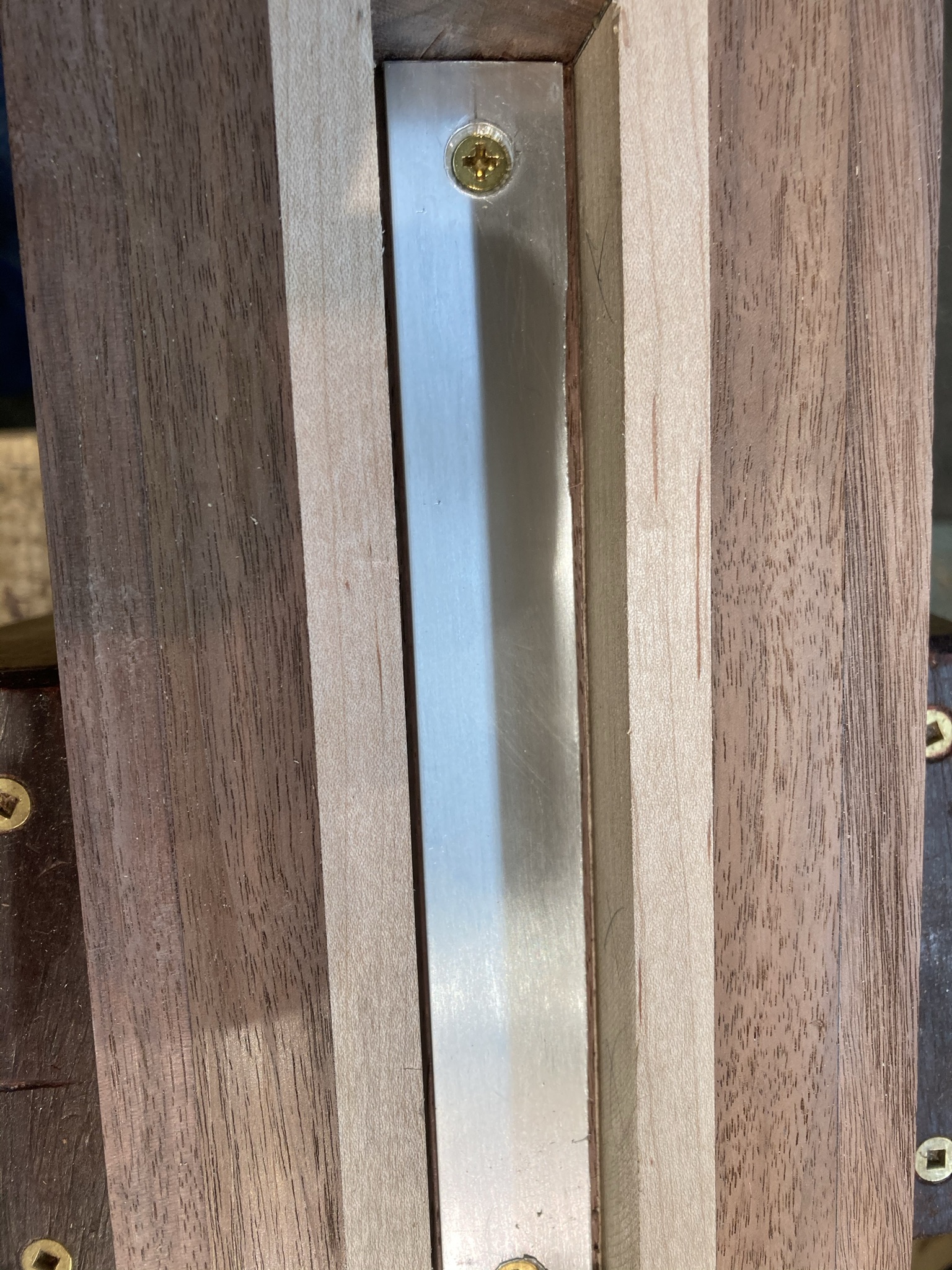 Drilling the pivot pin holes from both sides after careful layout. Had some nasty breakout from the arm mortise walls so I need to work on that problem. First thought is to drill before mortising. 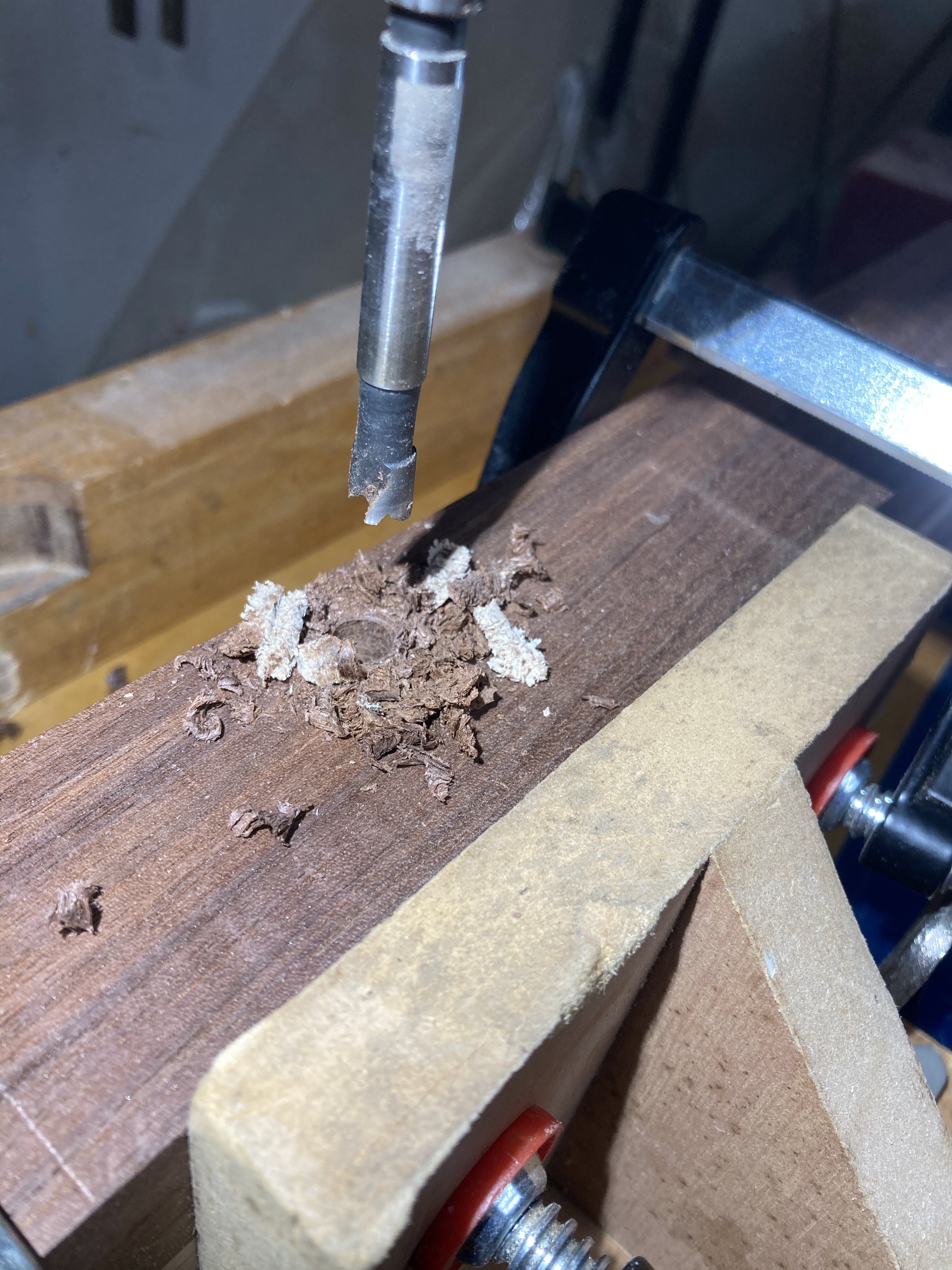 Test assembly and all is OK. Chop moves smoothly and leg and chop line up. 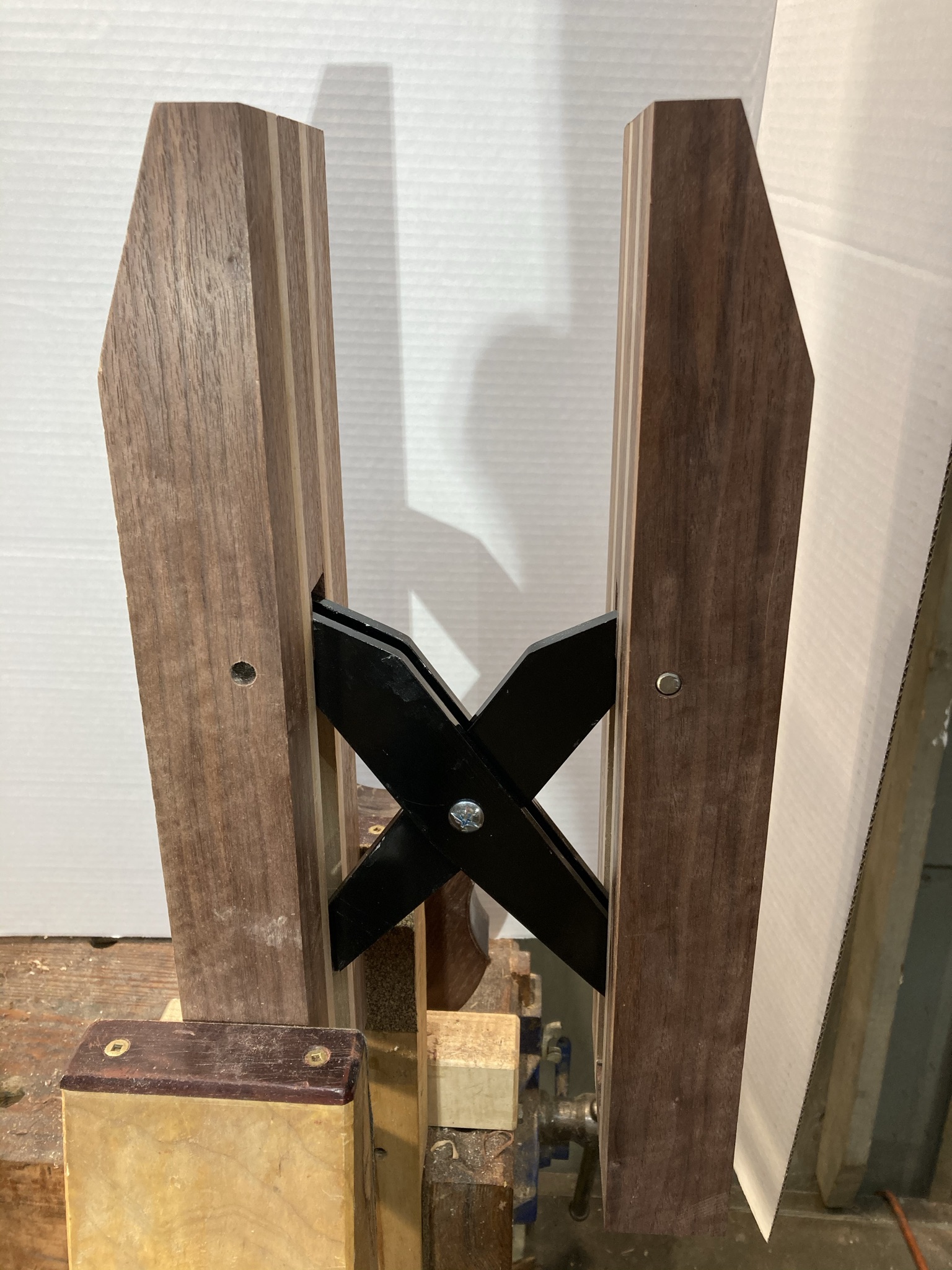 Next will be the handwheel and screw.

Man with many vises
User
The handwheel has a counterbore for a dumbbell handle nut on each face. Each nut is modified by drilling and countersinking for three #8 screws. After fastening one nut, the opposite nut must be phased for minimal looseness and then screwed in place. When the phasing is right, with a flip of the handwheel, it will travel for a few inches along the screw. 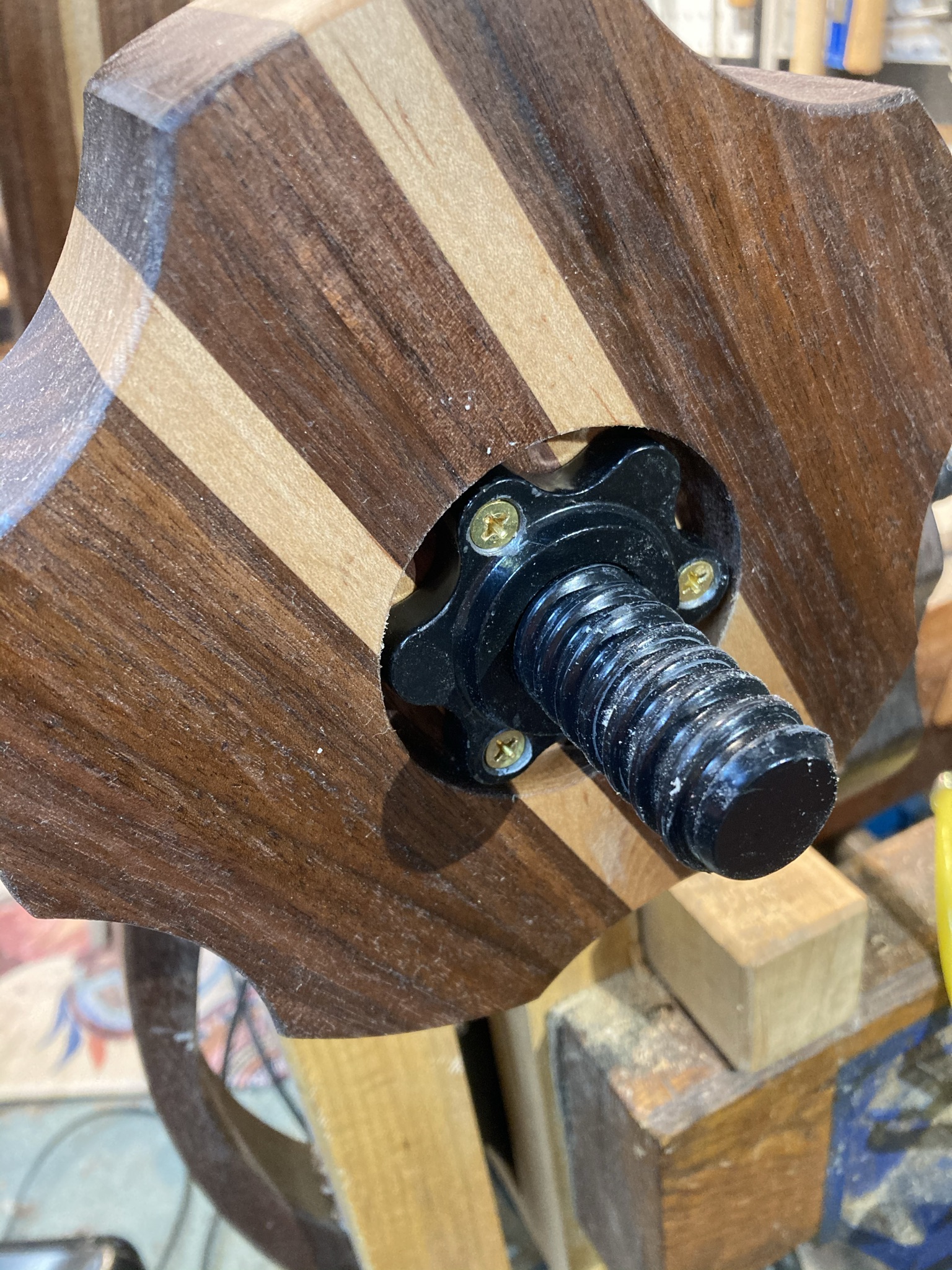 Here is what the almost done 16” tall prototype #2 vise is looking like: 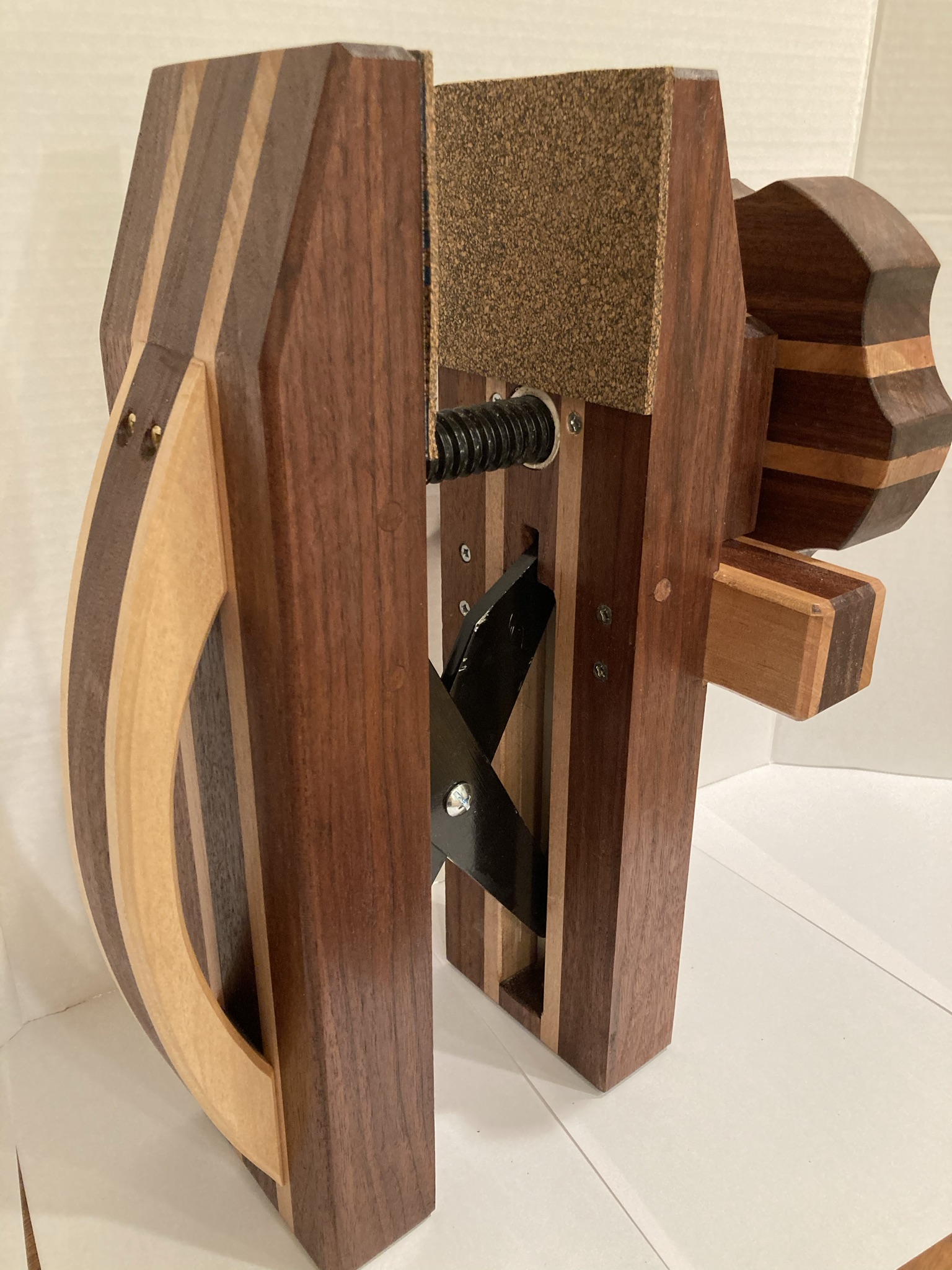 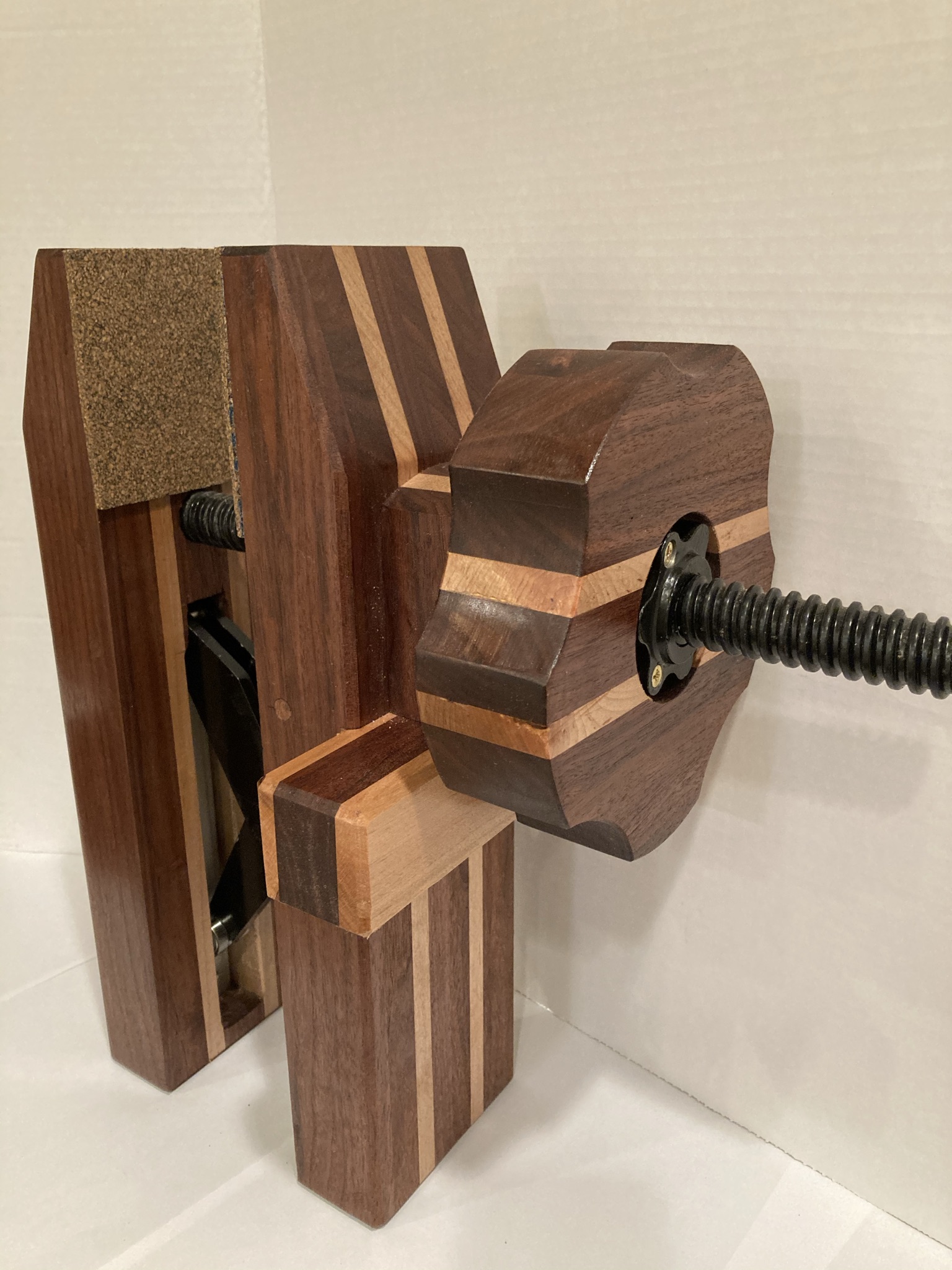 Donn
Corporate Member
Pop-Pop, WOW...the vice is not only useful, it is beautiful!

drw said:
Pop-Pop, WOW...the vice is not only useful, it is beautiful!
Click to expand...

It looks better than I expected from recycling painted walnut. The hard maple was recycled from bed rails that our grandson outgrew. Avoided a store trip during this year’s pandemic.

Looking forward to meeting you in the workshop next year.
Last edited: Dec 21, 2020

John
Corporate Member
Looks great. Can I ask what the width is, have to make sure it fits in my front vise.

Danny
User
Vise is beautiful. You have done a great job documenting it as well. The photographs are excellent.

JohnnyR said:
Looks great. Can I ask what the width is, have to make sure it fits in my front vise.
Click to expand... 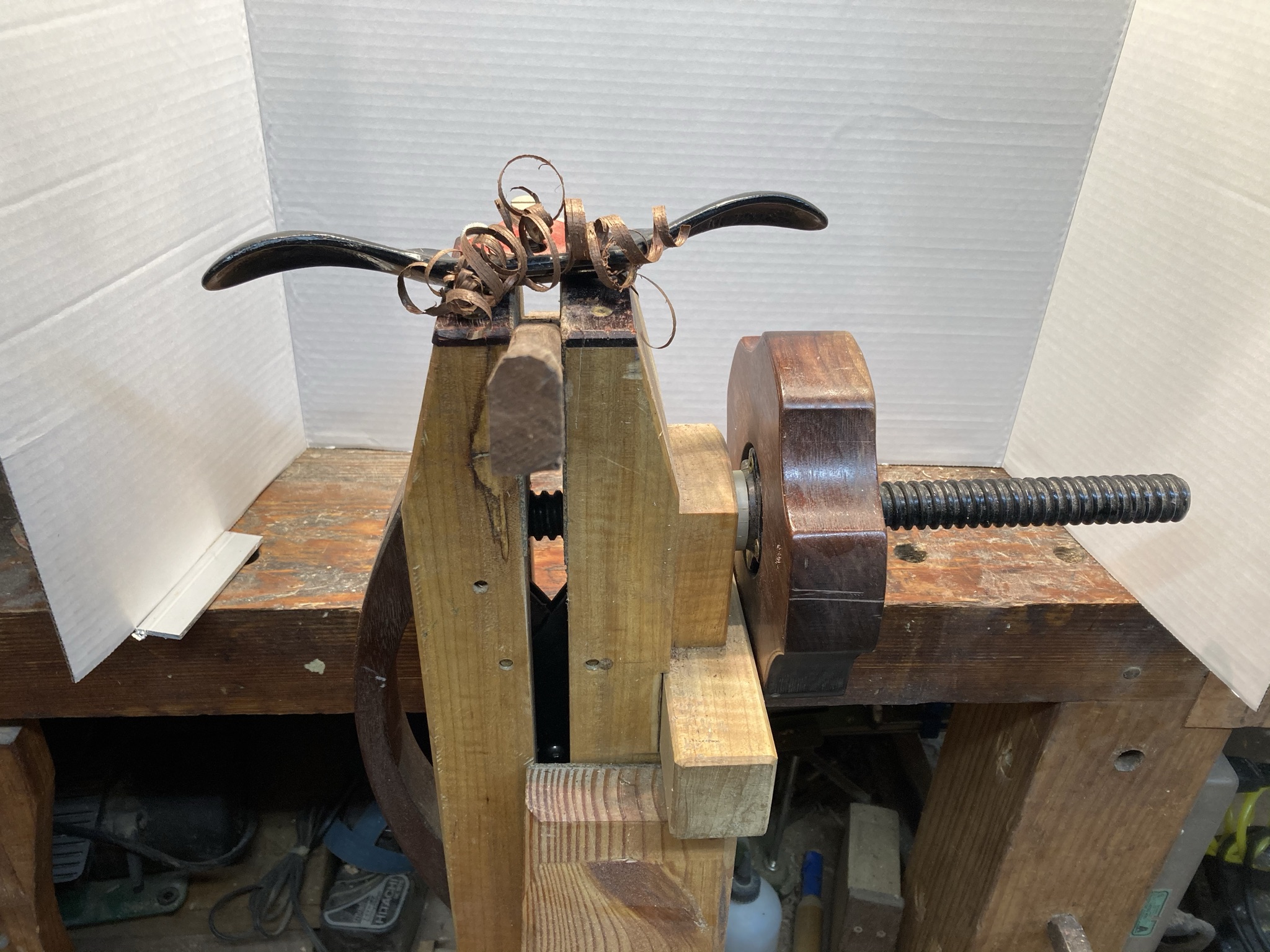 The bracket (facing forward above) can also be clamped to the bench front with a pair of C-clamps as an alternative. 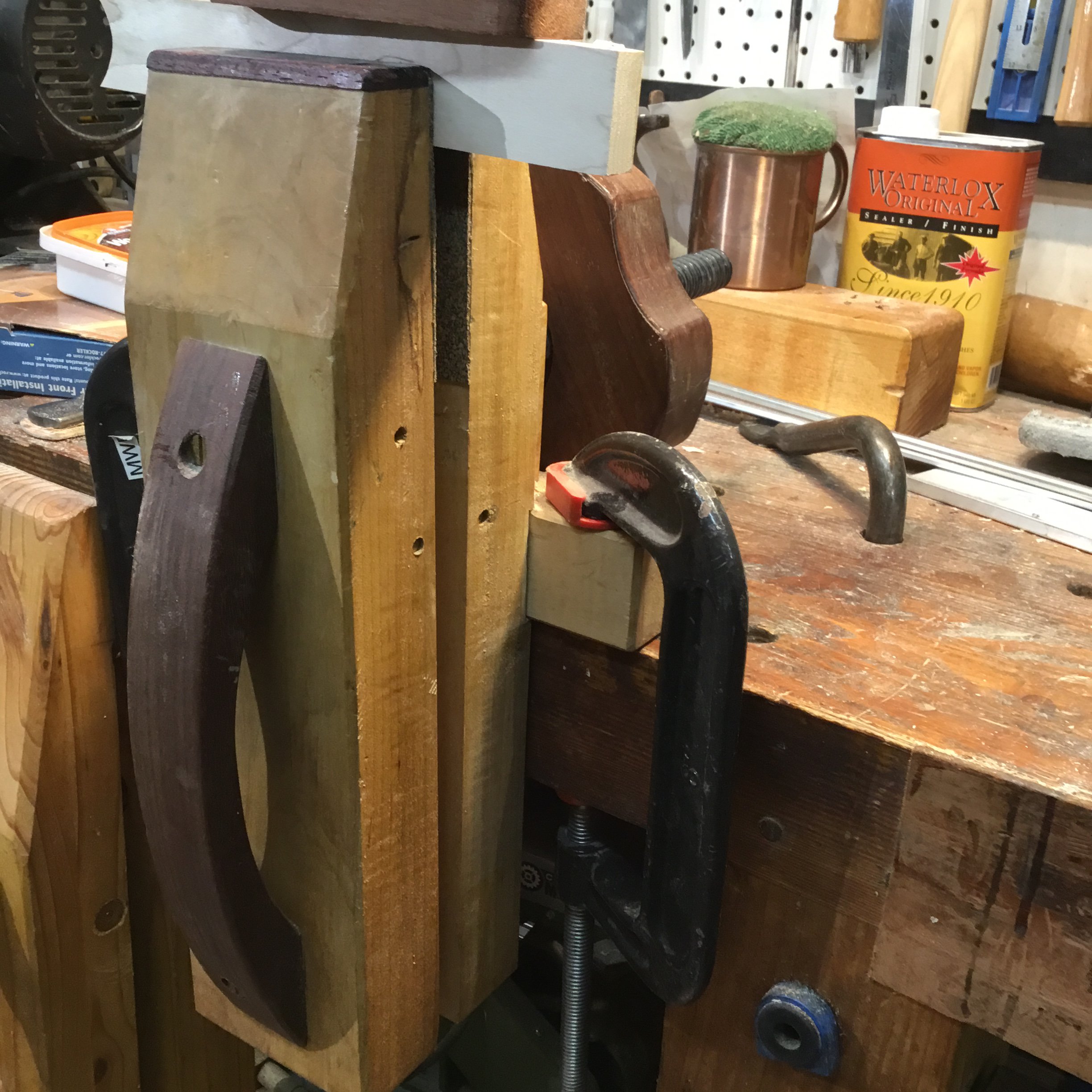 Danny Batchelor said:
Vise is beautiful. You have done a great job documenting it as well. The photographs are excellent.
Click to expand...

I will be making step-by-step instructions for the workshop so you may see some of these photos again next year.

Man with many vises
User
Previously, I have been using a modified piece of Schedule 40 PVC pipe to line the hole in the block and leg that the screw slides through. Today, I replaced that with a pair of 1/4” thick HPDE washers made from a kitchen cutting board.

So far, that works so I decided to stop tinkering and put the vise into service and test it out that way. BTW, the finish is a couple of wipe-on coats of Original Waterlox that I won in the raffle followed by Johnson’s wax applied with steel wool and buffed. 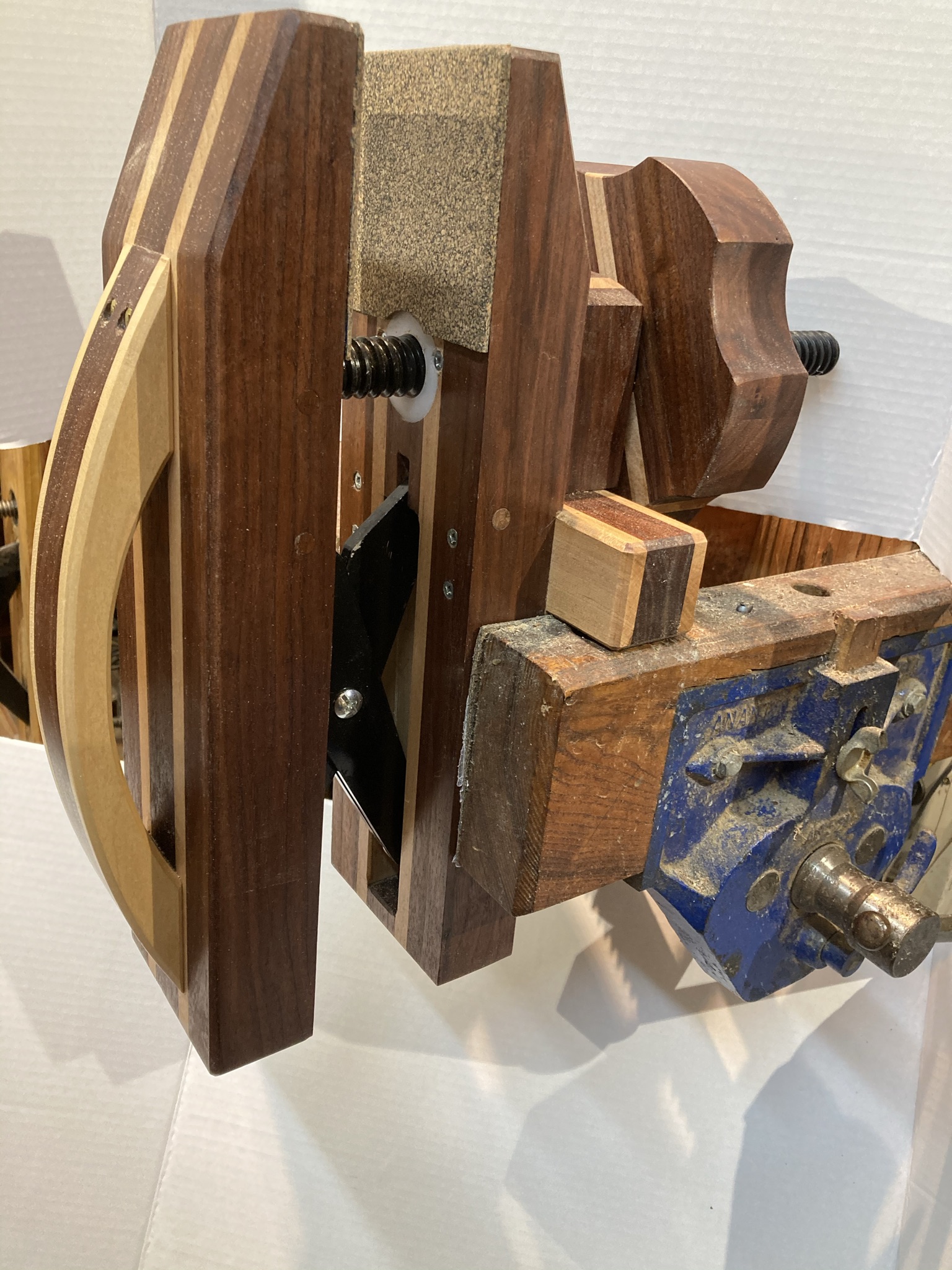 Phil Soper
Staff member
Corporate Member
I am SO glad to have the opportunity to host this workshop in June. Mike (pop-pop) is doing an excellent job

Rob
Corporate Member
I sure wish I didn't live 260+ miles away from Phil's -- I'd love to participate in this workshop or a future one on this topic. Maybe one at Bill Clemmon's shop next time (I can make it there in 2 1/2 hours or so)?
D

Gene
Corporate Member
Maybe a video tutorial could evolve from the workshop?.

Dee2 said:
Maybe a video tutorial could evolve from the workshop?.
Click to expand...

I plan on sharing the detailed instructions PDF to the Resources section after the workshop. Building this vise involves standard woodworking operations so I’m not sure that a video would add much value?

Rick
Corporate Member
I'd like to be part of the workshop if there is still room available. Great job in documenting with the pictures!
D

Ed
Senior User
Bit far to travel, BUT.....two vises for the price of one!

Dreuxgrad said:
Bit far to travel, BUT.....two vises for the price of one!
Click to expand...

Ed, I was puzzled at first but the cross-slide vise is here waiting for you.

Man with many vises
User
Made another vise handwheel to evaluate 4-lobe vs. 5-lobe. Decided on an end-grain butcher block glue-up from more bits of reclaimed walnut. A nice bonus of this method is the entire periphery of the handwheel is long grain for better feel and appearance. 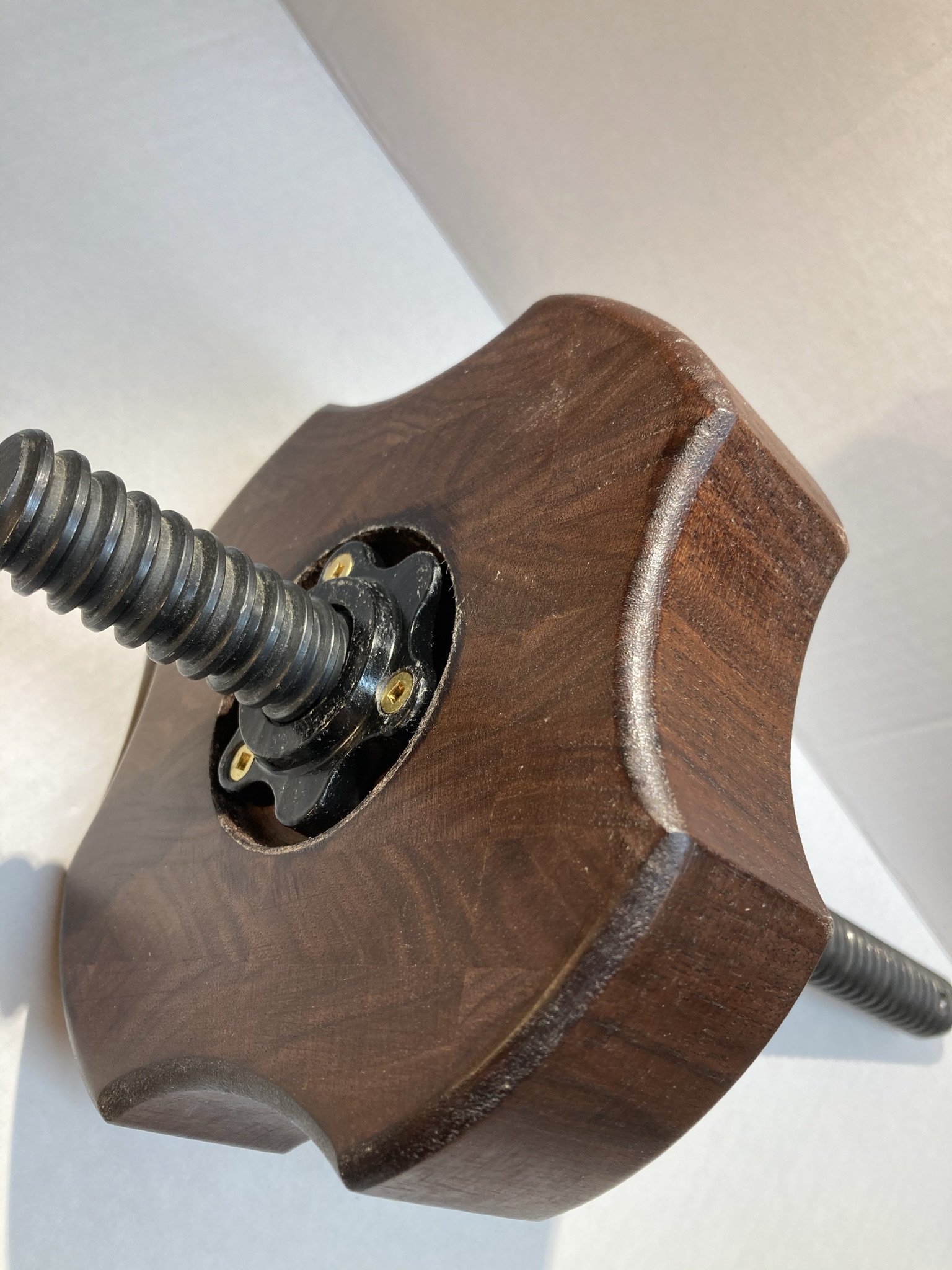