Mike
Corporate Member
This router fits the bill for what I’m looking for. The price is right, and it has helix cutters. The question is, is it any good? 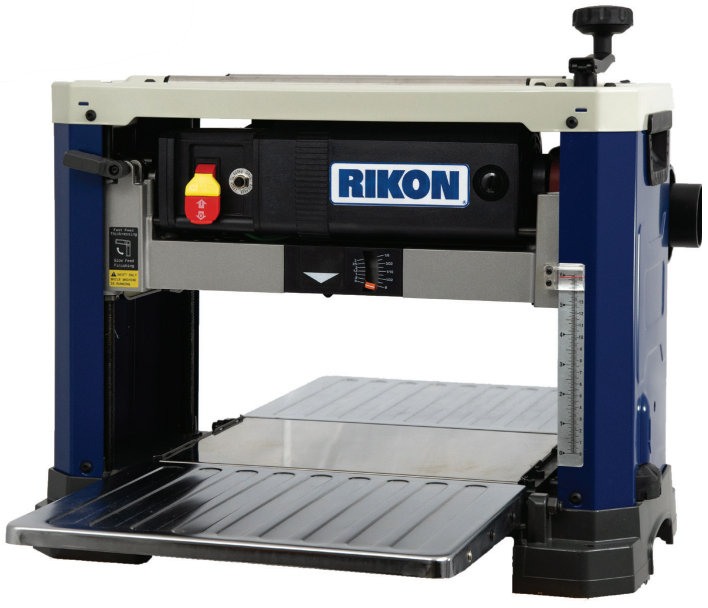 Roy
Senior User
Can you go see one in person? The Rikon tools I have looked at in Klingspors looked pretty nice. Didn't see a planer, though.

Bradley
User
hey Mike, take a look at picture 3, it shows the cutterhead. it does have the carbide replacements, which if you get a nick, can be easily turned. that will be nice. one thing to notice is that they are set square to the feed direction. they will effectively act as a bunch of small straight cutters, not angled like many other helical cutters.

you may not get the shearing effect that those angled cutters give.
R

Rick
Senior User
Also, there is only one cut per revolution. They say six rows but there are still only 26 cutters (at 1/2 inch each) to span 12+ inches. If you are still interested in this class of machine you might also consider comparable offerings from Cutech / Wahuda.

Mike
Corporate Member
The problem with this type of cutter head is when you change the cutter bits you can not get them seated correctly. They will leave very small lines in the wood that must be sanded out. If you have a wide belt or drum sander then no problem. If you only plane a few boards a month then maybe no problem. If you don't mind hand sanding then no problem. For some this works fine.

The helical heads over lap just a little and are angled so the cutters shear the wood leaving a much better finish with no lines. IMHO well worth the extra money over the straight knife helix heads.

I still use the old 12 inch straight knife type of planer because I like to sharpen and reset my knives and I only use it about one day a month. If I ran several boards a day i would get the Shelix.

Mike
Corporate Member
Thanks for the input. This is exactly why I asked the question. I don't want problems due to head cutter design. I create those on my own.

Scott
User
I looked hard at planers. I had a modified Delta lunchbox. I wanted carbide bits, higher duty cycle and less skipe.
I wound up with a DW 735 and Lux head. Duty cycle is terrible. I replaced the breaker and it is better, but disappointing. I almost sprung for the Powermatic. The Rikon lunchbox is a big step up from the cheaper ones. DW 735 a step above any lunchbox. The moveable table Jet kind a step above and the fixed head design ( Powermatic the best) a truly wonderful machine. Just could not put out the bucks but I think it is worth it.

Not all carbide heads are equal. Number of cutters, RPM, curvature, and how they seat varies.

Mike
Corporate Member
So Powermatic is the Cadillac? Considering my skill level, it's silly for me to spend that kind of money, but because I have a couple of farms and a couple of barns with a LOT of wood, some of it to be harvested soon, a planer could pay for itself. Eventually. Or at least that's my excuse. If I could find a DW735 with the full Helix head on it (not the undersized one), I'd buy it, unless the price is too close to the Powermatic.

Scott
User
The 735 has a limited duty cycle. I run one with the full size head. Basically, it is a top notch light duty machine. Works very well, but if you think you are going to run 8 inch boards through it for an hour, think again. Putting the head in the DeWalt was not difficult. Mine came with the bearings attached which made it very easy. My only negative is the assembly requires you to roll the belt on and off. Design feature of DeWalt. I was taught to never never roll a belt as it can cause internal damage. DeWalt claims it is a 15A machine and even has a 15A plug on it. Totally false. Pulls close to 20 doing 1/64 on 8 inch wide walnut. It comes down to a cheap universal motor or a "real" induction motor designed for the load. There is a difference between a $1200 ( head + 735) and a $3200 machine. Light occasional use, the DeWalt works great and is a big step up from the smaller lunchbox planers. That is why it seems to be the de-facto hobby machine. Excellent results, but with limits. Would I run a 12 wide Purpleheart through it? No way. Buy replacement 18 A circuit breakers in bulk. They are crap and fatigue causing trips at even lower loads. Hint: 18A thermal breaker on a 15A plug? How did CSA or UL let that get by?

I went and visited two super helpful fellow members shops. One with the Jet, one with the Powermatic. If only seeing the Jet, I would have no complaints and would buy it. Then the PM. Heavier. Quieter. Much smoother cut. If you believe the Geetech description of the design, it has the least snipe of any machine. For even more money, the odd ball machine is the Laguna. Never seen it. Basically, in the 3 HP class, there is the moveable head ( Jet) and moveable base ( Powermatic) All of them are versions of these two basic sets of castings. Different heads, different specs on machining and so on. A hint is I am one cheap SOB, and my choice ( I chickened out and am sitting pat) is the Powermatic. The Griz versions of both had heads with far fewer cutters. Griz seems to cut a few corners to get their price down, but basically the same machines. If I had a barn full, I might go for a 5 HP 20 inch. I only have storage for the project at hand.

A little care and there is no problem with the replacing the cutters. Keep it absolutely clean, pay attention, and use an inch-pound wrench as the instructions say. Some may be slightly easier to seat than others, but none are a problem. Have you visited Mywoodcutters.com and read everything?

Mike
Corporate Member
I'm struggling with a space problem, so I don't know that I have room for the Powermatic. The one I want is $3500 plus shipping and tax. That's rich. My first step is to figure out how much space I can dedicate to a planer.

Scott
User
My 735 is on a stand with casters. Actual footprint is not much different, just lighter to roll out. Even though the DeWalt has handles, it is not portable! 100 Lbs.
Zoro had a sale last month. 20% off. It was hard to pass, but other priorities. The Jet design is lighter, so would be easier to roll.

tvrgeek said:
Zoro had a sale last month. 20% off. It was hard to pass, but other priorities.
Click to expand...

Powermatic was on sale last month?

Scott
User
As a Zoro customer, I had a 20% of anything over $250. ANYTHING! And free shipping.

Helical heads put a higher load on the motor. Personally I would worry about that, and based on what Scott said about duty cycles

Den of Tools just put out a pretty good video on all the portable planers. Bottom line, get the DW735 and be done with it. Add a helical head at your own discretion, but keep in mind you'll have $700 or more in it. For tasks like plane a pile of rough lumber, you need a stationary planer.

Stationary planers are getting more and more expensive. I see the cheapest planer Grizzly has is a 15" 3HP $1350 + shipping.

Scott
User
ALL tools are getting more expensive. The owner of Griz was talking. Iron, transportation, everything going up.

What I know for sure, is both my jointer and planer, I could never do more than a couple boards without nicking a knife. Lux and Byrd heads, not ay more! Sure, I paid twice for the jointer head than I paid for the jointer (Used 6 inch Ridgid) but now it is a tool where I only think about what I am doing not the tool. The DW 735 I do think about duty cycle and never going over 1/16 even for a 2 inch strip. 4 inch, I'll do 1/32. Wider, 1/64 only.

If you need a real planer, then yea, you have to buy a real planer. Woodworking is an expensive hobby. If a occasional user and you have patience, then the DW will do a great job. Long history, ask around. Buy cheap and you will by again. I went from RAS to benchtop to contractor to cabinet saw. Much cheaper to have bought the cabinet in the first place. On my second drill press, and I should have bought the Nova. Started with a Delta lunch box, went to Dewalt. Eventually I'll go for the 3 HP or bigger, so all the time and money spent on lessor tools was flat out wasted. On finish. the PM finish is scraper ready. My DeWalt needs sanding. Not much and I do it by hand, but not scraper ready.

Maybe a hint on pricing. I just found out they no longer make traditional knotted wool rugs in China. No one is willing to work that hard for almost nothing. Production moved to India and Afghanistan. Reminds me of a comment years ago when Nixon was first opening up relations with China again. " First Coke, then McDonalds. Collapse within a year" The reality is as the economy of China booms, the population expects more and won't work for nothing. China still has a big advantage on no pollution controls, but I suspect that will slowly wane. As far as stationary tools, we just don't have the foundries any more. Smelting and foundry are seriously dirty. Matter of fact, I lost a good friend who grew up on Sparrows Point. Lung disease @ 40 directly attributed to the air when he was growing up.
You must log in or register to reply here.
Share:
Facebook Twitter Reddit Pinterest Tumblr WhatsApp Email Share Link