Lee
Senior User
I recently finished a pergola for our pool/backyard. There really wasn't a ton of woodworking skills needed, but it was a fun summer project. We replaced a deteriorating brick patio with new tile, so my wife suggested a pergola. In my mind, it was a waste of wood! After a bit of research, I thought it may be a good option. I assumed zero shade would come from it, but I was wrong. It actually produces the perfect amount for our backyard and still has the option of adding some sliding shade canopies in the future. We also decided to "electrify" it and added two wet rated outdoor fans. The breeze has been a nice addition. While the brick was removed, we dug and poured the footers. It was a bit of a task as we had to go almost 36 inches in a few because of the sandy soil. I went with a simpson strong tie post base connection, so I came back after the footers were dry on the surface and leveled them with an angle grinder. It was quicker work than I thought it would be. After setting the 6x6 posts on each footer, I braced them together and let the hardscape folks finish. I then came in and added the beams to the long side of the patio, the rafters/joists perpendicular, and then the slats on the top. I went with western red cedar from the Hardwood Store. Excellent service as usual. My wife stained all the pieces before putting them up with Proluxe SRD Wood Finish in dark oak. I went with that product after seeing multiple recommendations on this site. It was quite easy to apply and use. Thanks all! 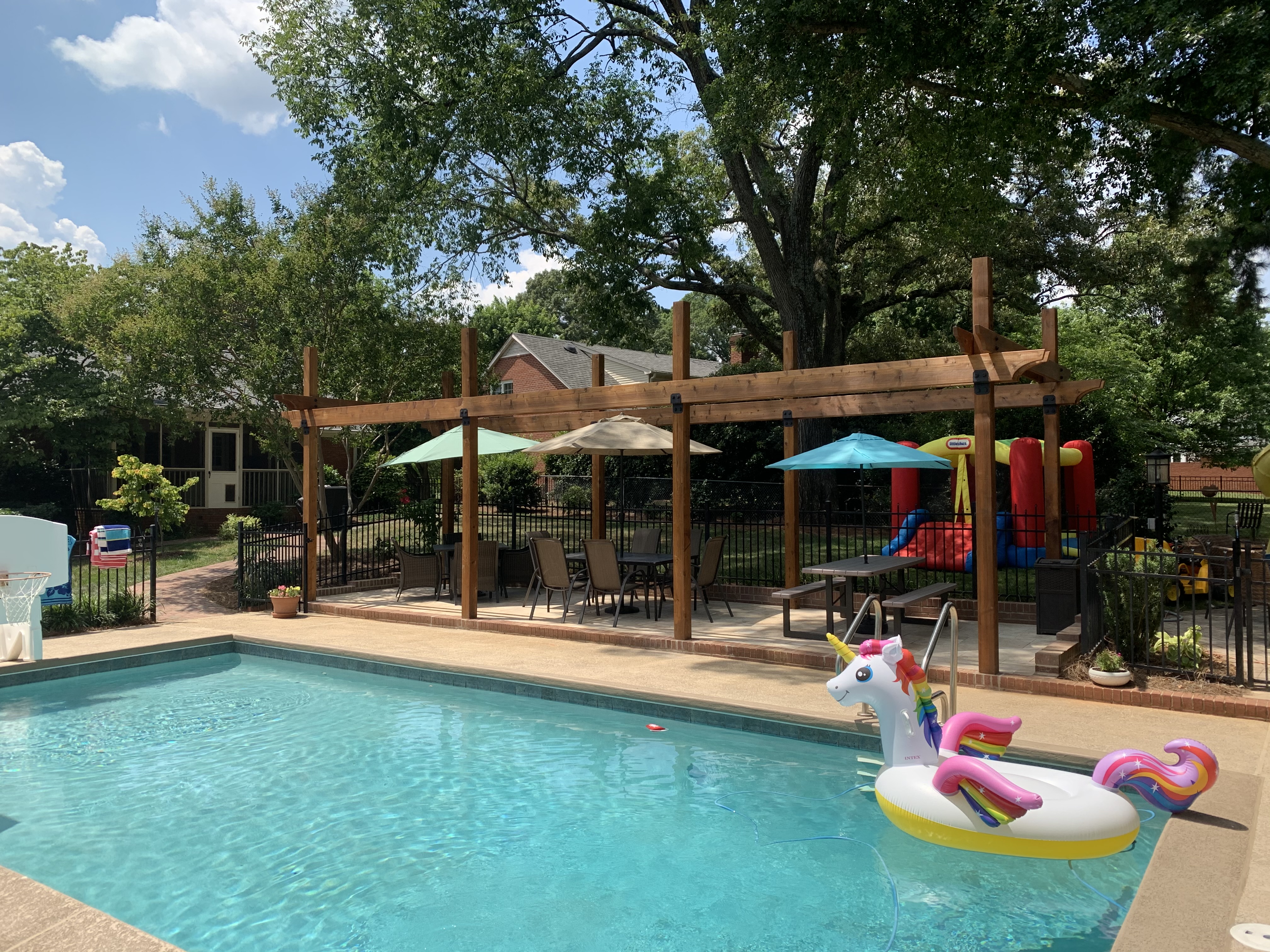 I didn't get many pictures up to this point, but here are the 2x10 beams installed along with the 2x8 rafter/joists at end posts. I used some more simpson strong tie hardware for all the connections. Outdoor Accents Decorative Connectors Pricey but we really liked the look...also the reason there wasn't much woodworking on the project. Also, that unicorn is no joke. I cannot even get on that thing. My kids get a good laugh every time I try. 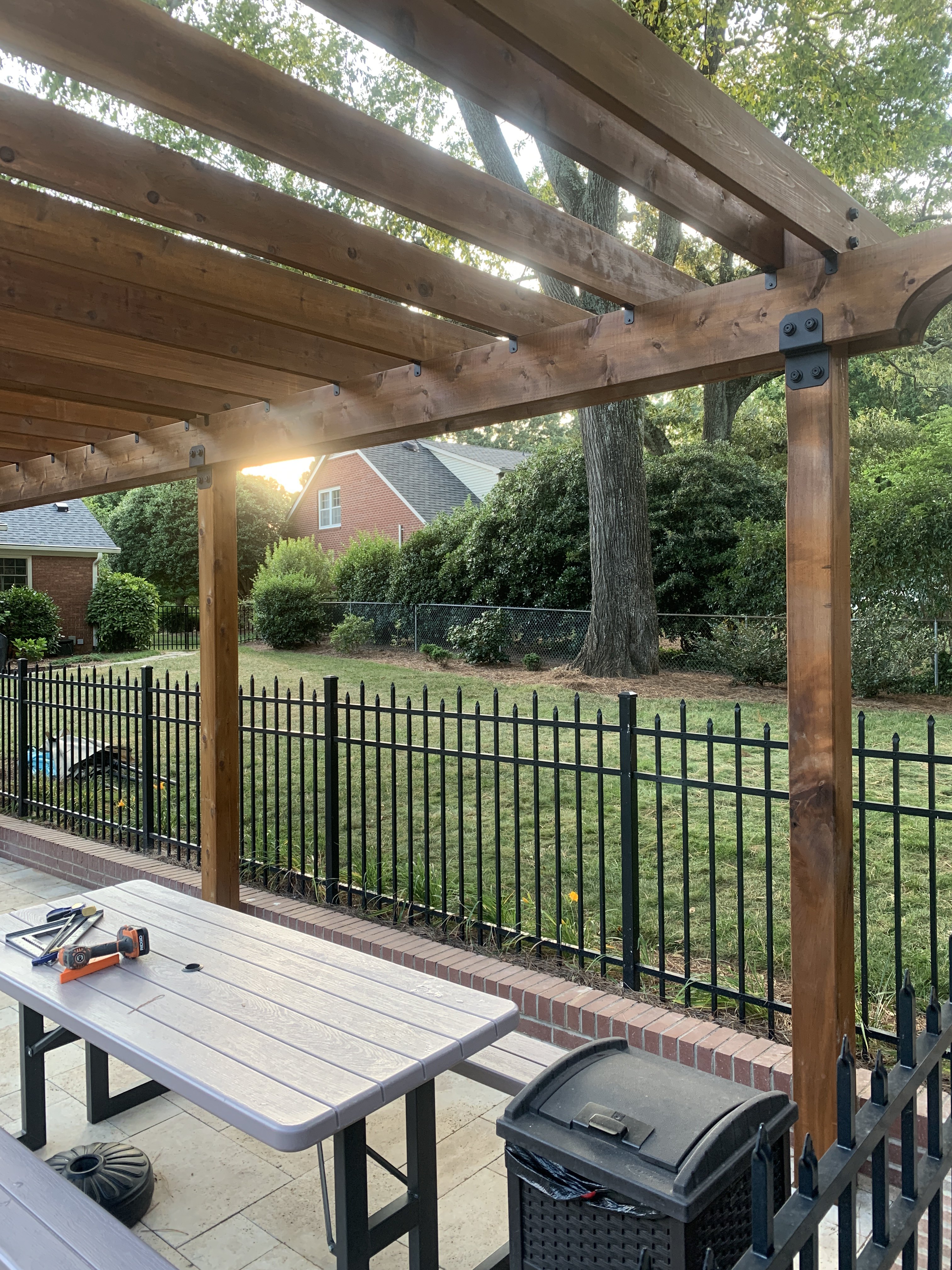 A couple of shots after all the rafters are installed. After the rafters were in, I cut off the top of the posts with a reciprocating saw. I think I finally made a good cut on the 8th of 8 posts. I had to sand a little to get them flush with the rafters. I tried using a jig with angle irons but just couldn't quite get it to work well enough to avoid additional sanding. 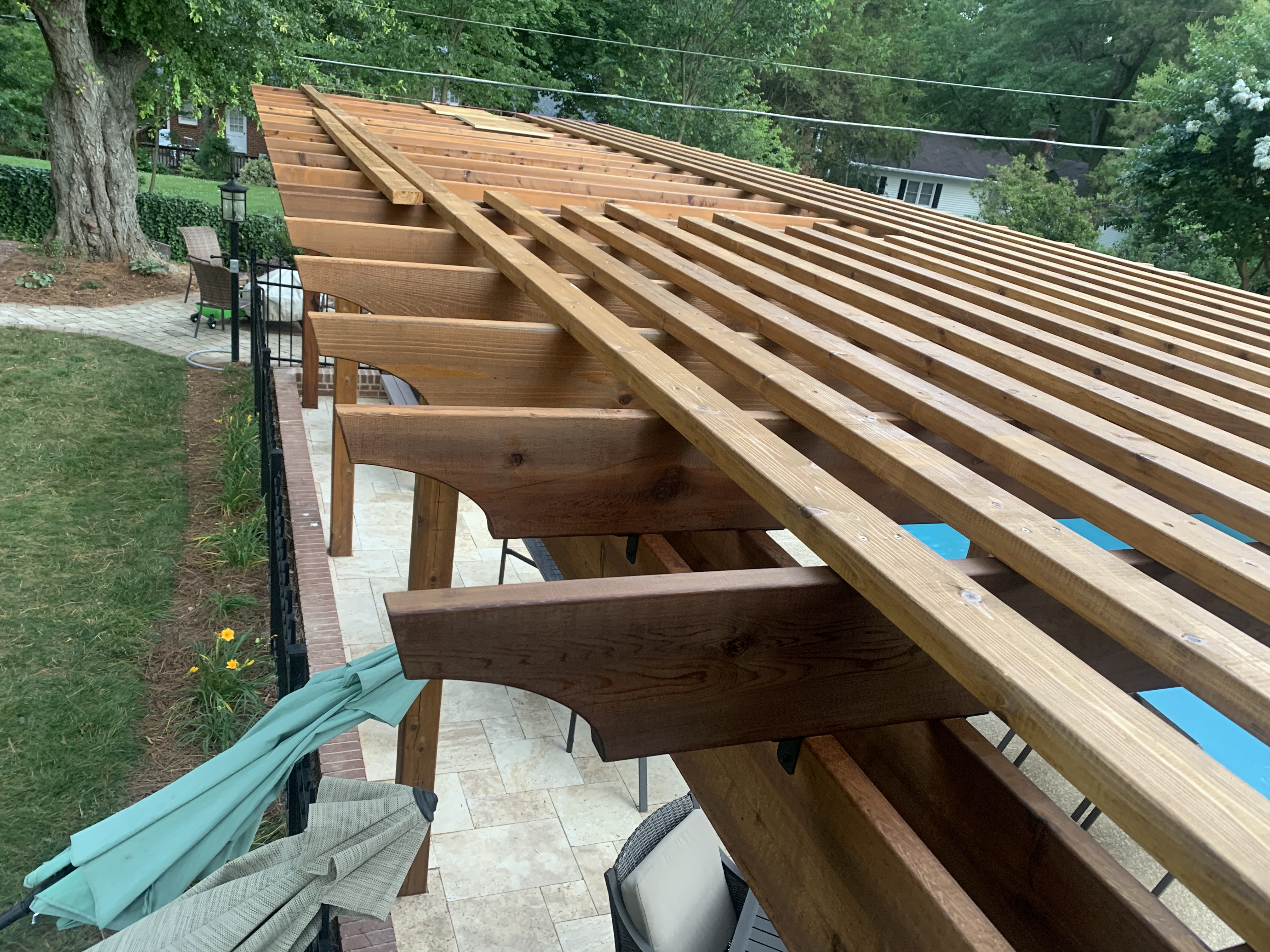 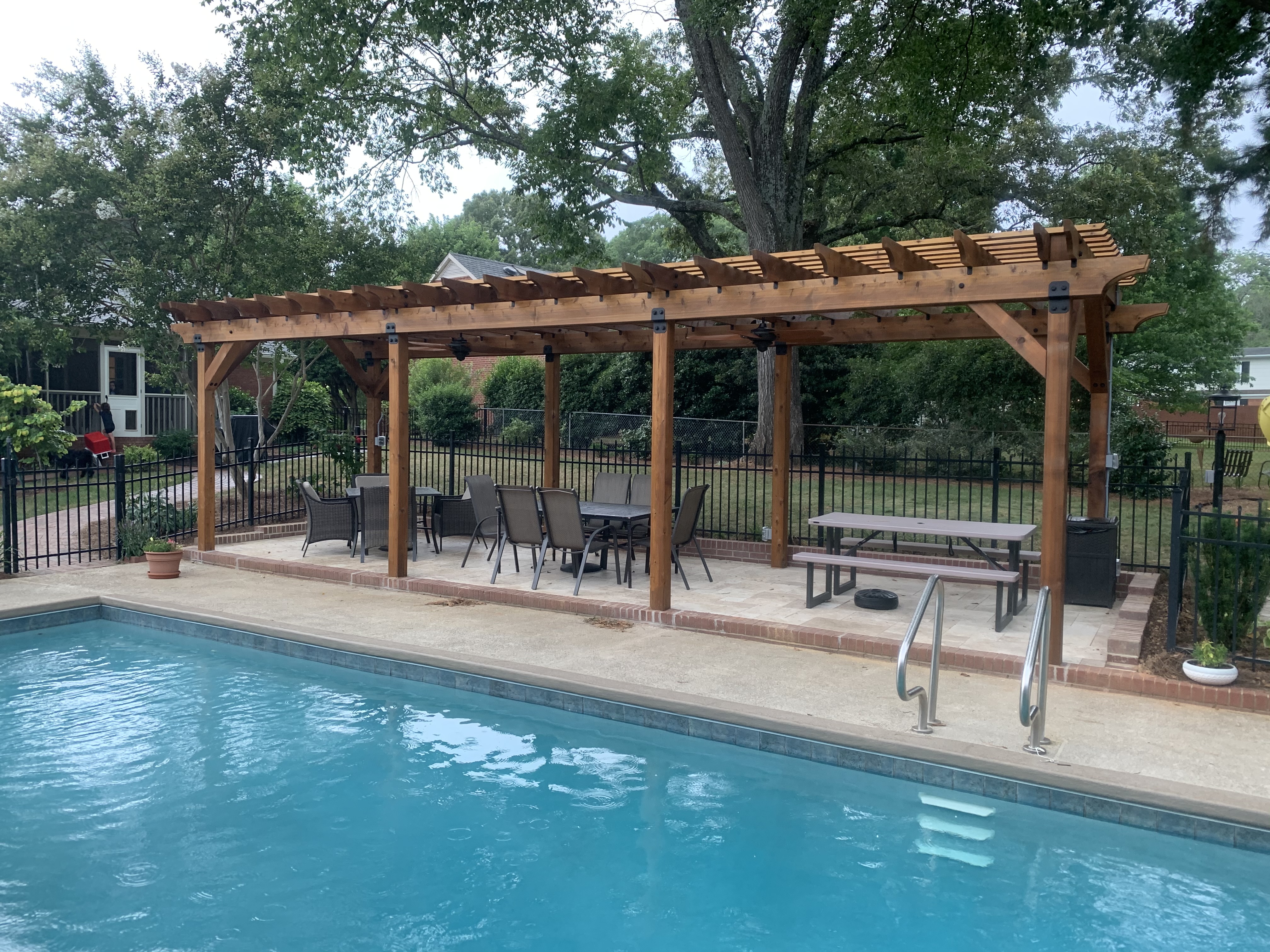 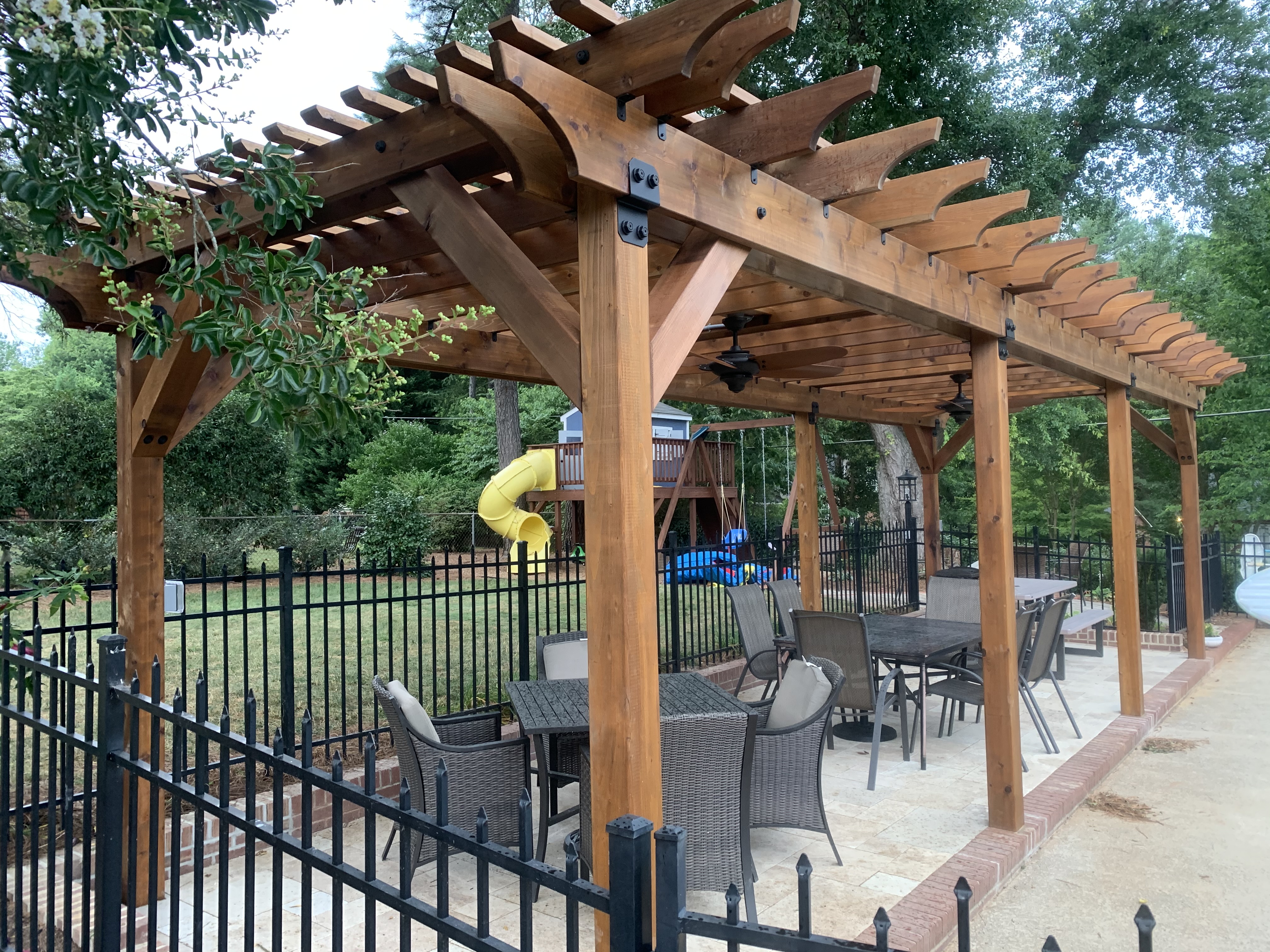 These two are final shots. The ends of the beams and rafters were cut with a template to draw the curve and angled end, then jigsawed close to line, then I put the template back on and routed to final design. Then roundover and sanded the ends to match the dimensional lumber. I stole the design and process from Next Level Carpentry. I made a few adjustments, but overall used the same method and design. I really like the clean look.

Finally, here's a shot of the jig I used to drill the holes for the bolts to be drilled at the bottom of the knee braces. I wanted them to go in at a 90 degree angle to the post, so I had to tilt my drill press table to 45 degrees. To hold the 6x6 in place, I drilled an old table saw tenoning jig to my drill press table and added a piece that caught the top of the 6x6. The weight of the 6x6 held it in place as I drilled a 2" deep hole with a forstner bit. Also, I did this all at 2 am, so I'm quite surprised it worked! Thanks for taking a look! 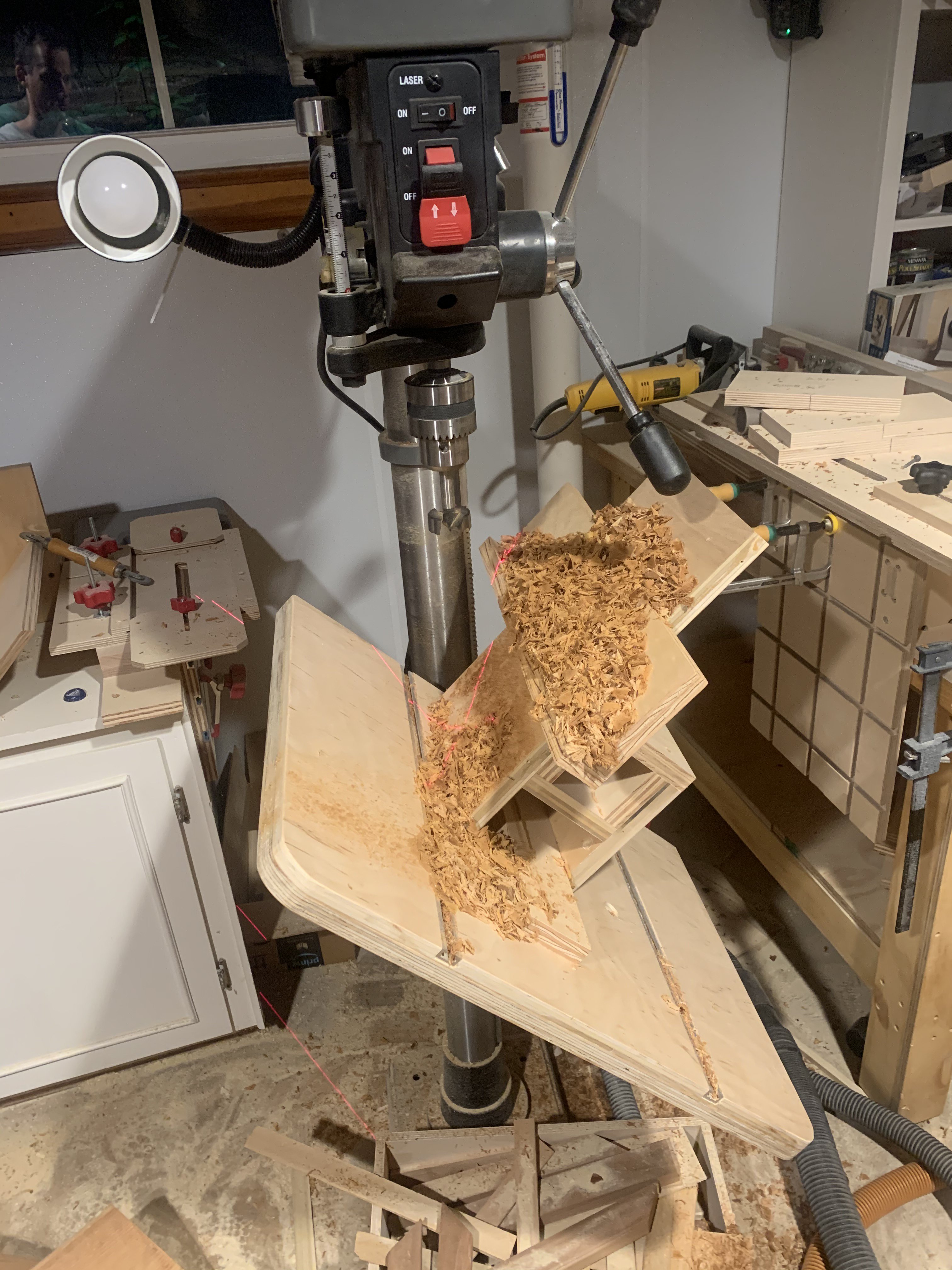 Bstrom
User
Very nicely done - add some Wisteria at each end and in not time you'll have some awesome shade.

Lee
Senior User
Thanks for the kind words all. My favorite part was grain matching two of the front beams for 22 feet of continuous grain. I felt like a woodworker for that part at least! Best thing is no one has even noticed except me.
You must log in or register to reply here.
Share:
Facebook Twitter Reddit Pinterest Tumblr WhatsApp Email Link