Scott
Corporate Member
As I got a couple projects done and out, it was time to address more shop issues. Dust collection first.
As I reported, I made great progress on the BS by switching to a vac-based dust collection and a foam "box" under the throat plate. All I need to do is get a second fixed in place vac and dust deputy so I don't get lazy and not drag over the hose.

On to the table saw. I got a "4 inch" saw stop over arm from a member. Installed it with curious mixed results. Did 20 2 inch crosscuts in MDF and it had MORE dust left on the table than without the overarm in place. But in the normal worst case, that of ripping half a blade off a long edge, it was much better. Less than half I would say.
Curious, the two sides are solid so they don't lift independently which might do even better on the rip. The overall total gap as it does a crosscut is so great as to be ineffective. Not that big a deal for me as I normally use a sled and am making a top collection I expect to do much better. Compared to the Harvey stock blade guard I added a port to, it is better as the modified guard just does not have enough airflow and did little but be in the way. I need to think about the airflow directions. A brush on the rear may help quite a bit. I see Harvey is now selling the Shark overarm. Big bucks though.

Now I do need to call out SawStop for pretty misleading advertising. Yea, the outer arm is 4 inches, but the inner tube is only 3. So it is not as large as they advertise it to be. Now in the specs, they say this, but the lead advertising is "4 inch". I think the basic arm is workable, but much more work is needed on the guard. Besides independent articulating of the sides, I want to make the extension easier to move so I can offset the hood easily for push block clearance depending on the kind of cut I am doing. I have not tested the additional ZCI plate holes on the side rip function ( Hooked on wood and others) as I think in that function has promise.

I also added some foam sheets to the floor of the saw. Now instead of it working like a low pressure drop box. I only get a trace of dust on the floor and the majority does go out the port. Much work to be done to reduce the volume of the cabinet and manage airflow direction needs to be done. There are gaps between the table and cabinet and my saw does not have a blade lower shroud. It is my belief that a shroud with focused side flow would do far better than just relying on a massive DC as I demonstrated on the BS.

Not to think about the miter saw. I added a plenum below it and that helped quite a bit, but it needs focus. Something conforming and movable to the rear will help. At least I made a much better set of extensions and added twin T-tracks. One for a stop block and the rear for two "set point" stops so I can have two repeatable positions. I just need to rotate my DC filter cans for a bit more clearance.

Just got the 3-D printed top port for my DeWalt planer. Not tested it yet. I probably should have bought the 4 inch, but I went 6 as I can duct it. Need to modify my ceiling run. Not sure how I will improve the jointer but I have some ideas. These are just to make cleanup easier as they make chips, not dust. Dust kills. Chips are just a mess. When I make the ceiling run change, guess I'll extend it to drop by the DP. Again for clean up as it makes chips not dust.

I have not addressed the router table yet and I guess the lathe is hopeless.

For handheld, switching to the 3M sander and mesh disks just about eliminated any fine dust. Belt sander is a mess even with my custom port to the vac. Hand held planer only makes big chips so I just sweep up. One big improvement is a few changes to my outside work bench. The more messy stuff I can do in the breeze, the cleaner the shop. Need to add an outlet and move the bench under the carport. Easy now I don't have a 5th car.

My last improvement is several sets of the cheap HF floor mats. Can't say about durability, but they make a huge difference to my feet. I taped them together on the back to make them easier to move when I have to roll a tool out. So almost ready for the next woodworking project.

Man with many vises
User
Someplace on YT recently I saw a small (maybe 4x6) open plywood box with a vac hose attached atop a table saw attached probably with magnets. Seems like that would be a decent solution for table top dust as long as your cutoff was reasonably narrow.

Scott
Corporate Member
Yup. I have a duct on a magnetic base I can set anywhere using my 2 1/2" drop I use for the router fence. It works sort of for those half-slices off the edge and not in the way. I will be doing more comparisons. As typical, it it is not in arms reach, somehow it doesn't get used.

I have a lot of thinking to do on the router. 2 1/2 in the fence and a tiny 1 1/2 to the shroud under the top. I can't enclose it in a box as I need to reach the router to change speed and push the spindle lock. So a lot of thinking, up/back draft or down draft? With both, they may be fighting. I would love to hear others experiments.

My phone was on the charger so no pictures. When the overarm is not is the way, it does add a bit of safety. I was watching a Cosman video and man does he put his fingers closer to the saw that I ever would!

Wiley
Corporate Member
Scott--Looks like you're being exceptionally thorough in addressing every tool. I do all my planing outside; I do as much sanding outside as possible: everything from 80 grit to 320 grit. I found weather was disrupting work flow too frequently, so I just bought a sanding table for inside. It will hook up to a Ridgid 6.5 hp shop vac (2.5" hose) and Dust Deputy 2.5 cyclone collector. It remains to be seen if this setup will capture 99% of the dust. So far it's working like a champ on all my power machinery.

I'm making a cart so I can move the vac setup around the shop and hook up to each power tool as I use it. My shop is too small to give up floor space for a whole-shop vac-collector, and my ceilings too low (overhead garage door is a major hinderance) for 4" and 6" ductwork.

Scott
Corporate Member
I am considering replacing a big section of my outfeed table with a perforated top as a sanding table. As the 6 inch from the DC is right there, it could have very good airflow. ( provided the holes are radiused). The mouse sander is not too bad with mesh pads and a vac. I have not tried my big 6 inch Bosch ROS yet.

As it is a hobby, I don't intend to put up with the weather, so full HVAC. The up side is here in NC, about half the year is perfectly nice outside. Not like in Md.

With come creativity, getting above garage doors is not that hard. Ducts do not have to be round. Sometimes there is space above the ceiling depending on the direction of the rafters. I have a saws-all and a hammer. I can usually make it fit!
R

I've always wondered why floor mats are expensive? At least they seem expensive to me. I've got some Harbor Freight ones too and after probably 7-8 years, they are still in good shape.

DrBob
Senior User
After seeing one of NCWW's member picture, I redid my miter saw DC shroud. Initial impressions are great improvement. Had to do some figuring to make sliding panels for miter cuts. Thanks to whoever posted that. 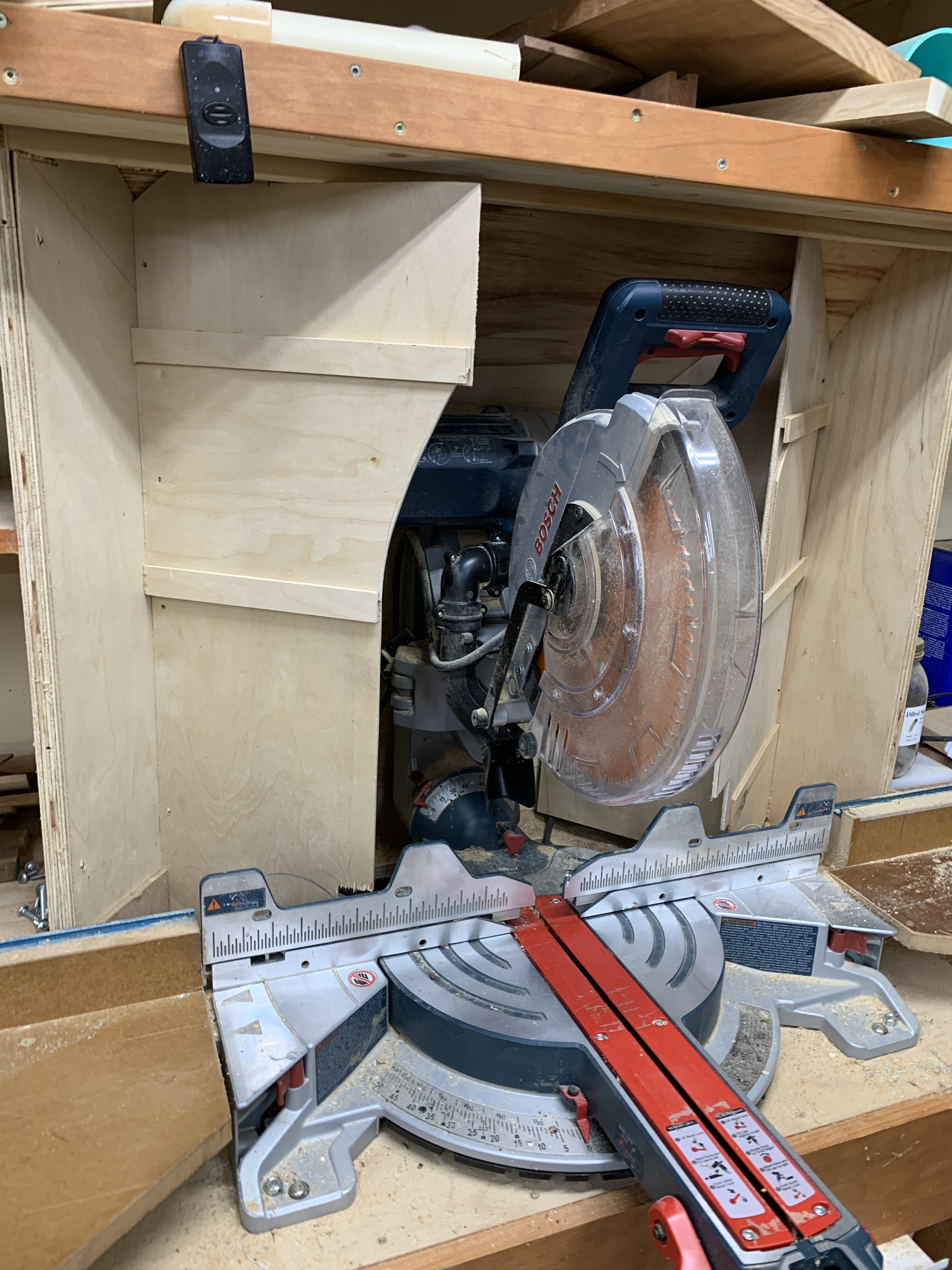 Scott
Corporate Member
Sliding. Yea. maybe a bearing tract so they move with the saw? I want to make my under ZCI insert more focused and have it move.
G