Keye
Corporate Member
Hey Bob. Been hoping you would jump in on this. Did you mean to say 93 1/2" without the riser. I am looking at the Delta manual and it says 93 1/2". Since I was going to take the riser out I ordered a new blade. I have the same issue with the riser in or out. I will measure the new blade just to make sure. I sent Iturra an email with pics attached. I have not heard from him.
K

Thanks Jeff I will.
K

Keye
Corporate Member
Bob, I measured the blade 5 times and it is 92 3/4". I measured a blade which I used when the riser was still installed and it is 105".
B

Bob Vaughan
Senior User
There's something silly wrong somewhere. It was mentioned earlier, but to be clear, I've annotated your photo about where the nut is supposed to be. 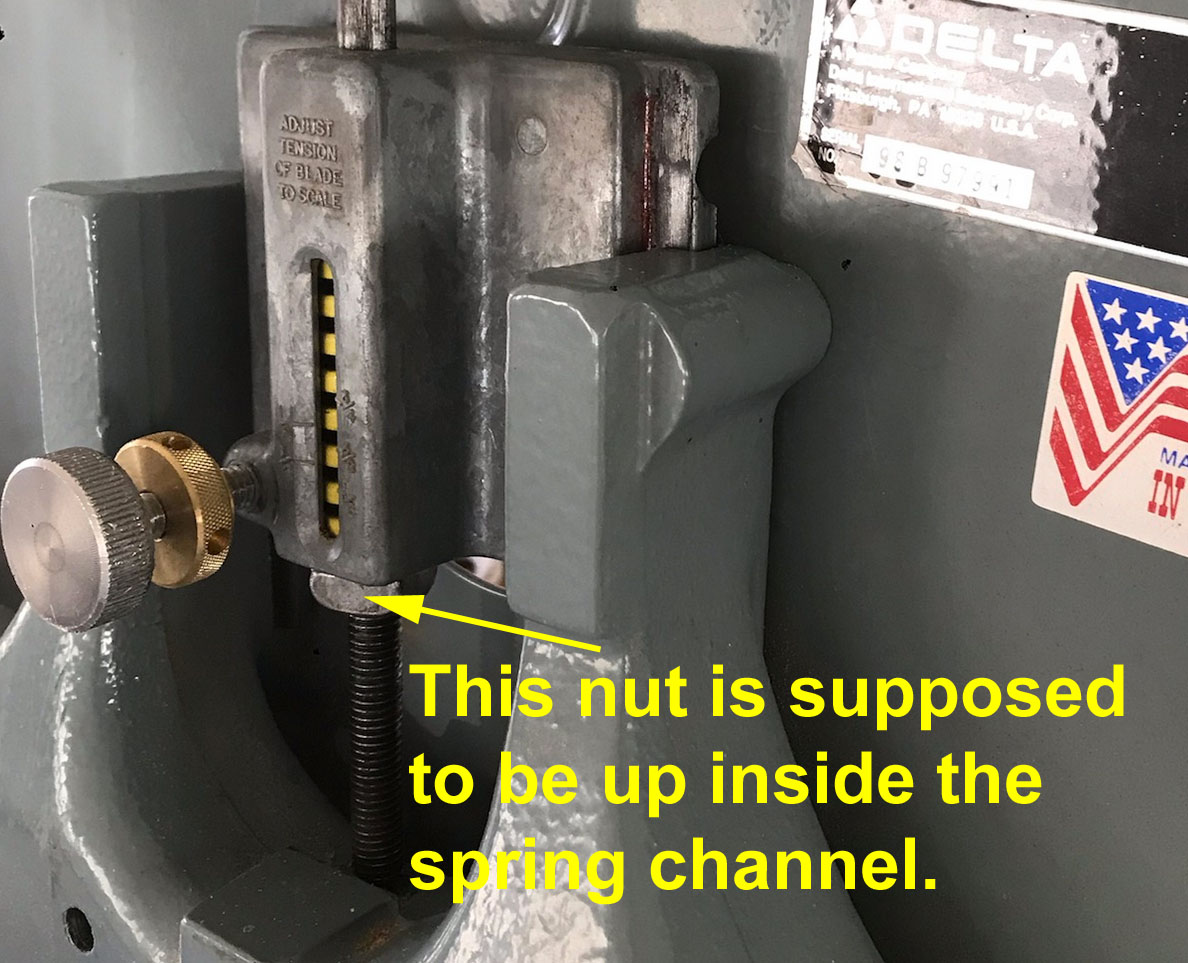 Wayne
Corporate Member
I have a Delta 14” 28-275 and just took a picture of my spring tensioner and Bob is correct. The nut sits at the bottom of the spring on mine. 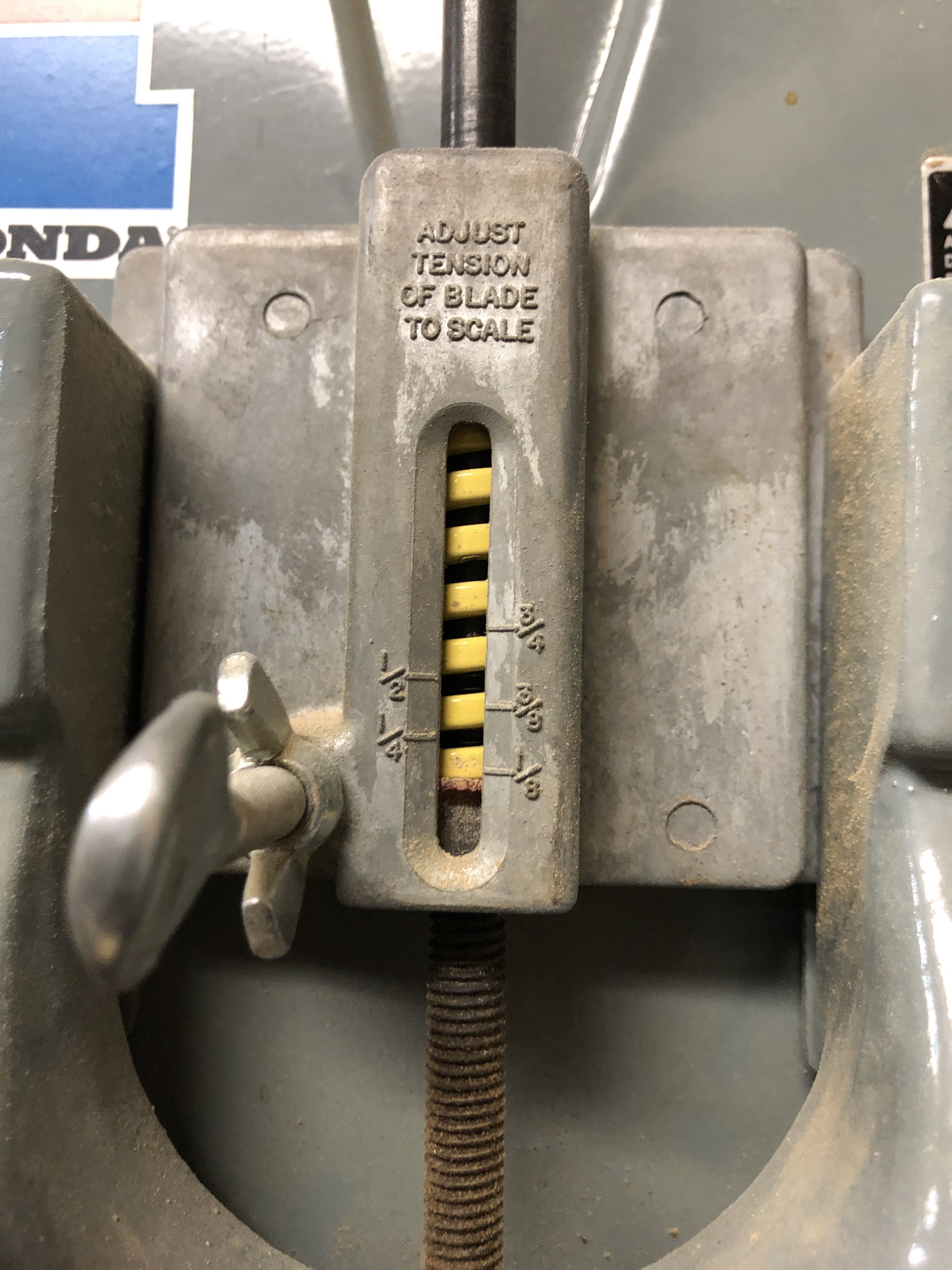 Keye
Corporate Member
Bob, as I noted before, in the picture I posted, the location of the nut is happenstance. I had just put everything back together so I could take pictures. I realize the nut moves up into the sliding bracket as you turn the knob attached to the threaded rod. Actually it moves up and down depending which direction you turn the knob.

I agree something silly is going on. As long as a solution is found I do not care if it makes me look like an idiot. It would not be the first time.

If I stop where the hinge touches the guard I can not obtain proper tension.

I did have a problem where I ran the nut all the way to the top of the threads and the blade was still not tight. This was the result of a permanently compressed spring. The spring has been replaced.
B

Bob Vaughan
Senior User
I've spent no small amount of time studying on this. while the 28-303 is a newer style saw than what I normally see, the few I've worked with over the years didn't have that problem.
I suspect it is the hinge. that square-ish aftermarket hinge looks like it would work better on the 28-200 style of saw. Trying a factory hinge may be the answer.
Here's the best comparison I can come up with. 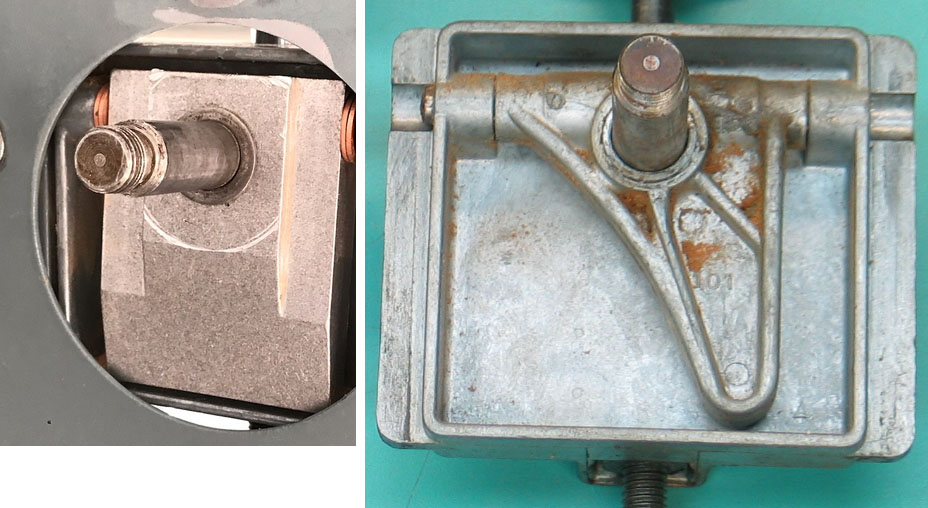 Keye
Corporate Member
I really appreciate your efforts because I am really lost.

I will call Louis Aturra on Monday and see what he has to say. The hinge came from him.

Just as a follow up. I put everything back together leaving off the guard. There were no problems. I put the guard back on and the problems returned.

I have a friend who works for a specialty metal manufacturing company. They make a lot of high tech stuff, up to, and including parts for military planes. Depending on what Mr. Aturra says I may ask my friend about milling off some metal down to the top of the washer.

The original hinge assembly is $51.00 plus shipping from Renovo. If I need to order OEM I might as well try to salvage the one I have. I will probably never use a blade larger than 1/4" so maybe it will still be strong enough.

I will certainly let you know how all this ends. My wife says buy a new saw!!

Scott
User
Are you sure about the LOWER wheel position? Co-planer?

Keye
Corporate Member
Yes I am sure.

This co-planer issue is something I do not profess to know anything about. I have seen conflicting opinions about this issue. I figure it can not hurt anything to assure they are co-planer so this is what I do.

Dumb question time. If you tilt the upper wheel to adjust the tracking does this not take the wheels out of the co-planer position?

I bought my BS in 1994 and was very happy with it. I was out of making sawdust for several years. When I returned, back in the fall, I had decided I would use the BS for more complex work. I refurbished and upgraded a number of things on the BS. The more I fine tuned and upgraded the more problems I had in turning out the quality of work I desired. I have removed a couple of upgrades and may return the BS to original parts and specs before I am finished.

I received an email from Iturra Design yesterday. I need to talk with Mr. Iturra and will call him tomorrow. Mr. Iturra has been very easy to talk and work with so hopefully we can solve this soon.

You were the first to respond to my issue and I thank you. Some of what Mr. Iturra said in his email I think you will find interesting. I want to talk with him first and then I will follow up with you. I also will be following up with Bob V.

Scott
User
Yes, when the upper wheel is adjusted for tracking, it will be out, but when it is set "flat" in a parallel plane, it should not be offset. So a strait edge on the lower wheel should be able to cross the upper wheel on both edges. Just like setting up a belt drive. Then it should need very little "tracking" provided the tires are correctly crowned.
B 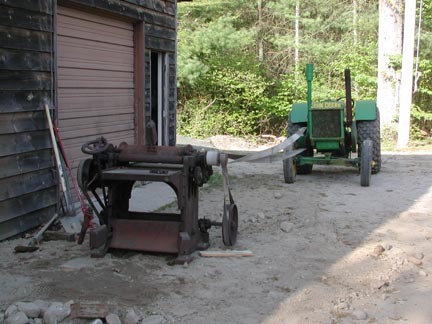 Scott
User
A little more tolerant that is.

Remember to check on both sides of the wheels to be sure neither wheel is skew . There is a reason bigger saws are made from big heavy steel and iron.
K

tvrgeek said:
A little more tolerant that is.

Remember to check on both sides of the wheels to be sure neither wheel is skew . There is a reason bigger saws are made from big heavy steel and iron.
Click to expand...