Mike
Corporate Member
After seeing Mike's battle with a router, I've decided to get a battery powered router with an electronic brake. I have no idea if such a tool would have helped, but it wouldn't have made the situation worse, I'd imagine. In any case, a recent article in a magazine recommended the Dewalt DWC600B. Since I already have several Dewalt batteries, it makes sense to stick with that brand. However, there are a couple of features I like better on other routers. The article doesn't talk about brakes except on the Dewalt and one or two more. What battery operated routers other than the Dewalt have brakes? 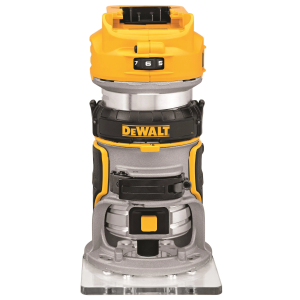 Scott
User
I think the Milwaukee 2723-20 has a brake. This article says it does, if you search the Q&A on the Amazon page it says it does, and if you look up video of it on Youtube it seems like it stops pretty fast. Oddly though it is not listed in the manual, although I have seen that with other tools with brakes.

George
Senior User
I have one and it does not have a brake.
And to tell you the truth i like most battery operated tools but consider them to be second to corded tools. This Dewalt much better than the Bosch it replaced.