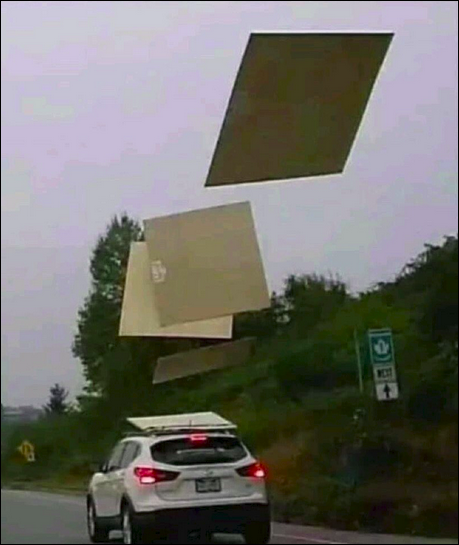 Pete
Corporate Member
I saw this on another forum. The caption was:
What happens when you don't tug on the hold-down and say "That ain't going nowhere"!!!!!

Scott
User
Wow. Someone could have gotten killed.

Jim
Corporate Member
Who needs a drone delivery system! Just fly the product to where it needs to go.
C

Charley
Corporate Member
I was following a guy that this happened to back when thin wood wall paneling was the rage. He had 14 sheets of it tied onto his roof of his car with the free rope (cord) offered by the Big Box stores. Interstate traffic and 60+ mph wind made this quite exciting. I was the third car behind him and in the left lane, so I got to see the whole show, Fortunately, although cars ended up everywhere while dodging these, there were no vehicle contacts with the panels or each other, but some went about 30' in the air and then floated down like falling leaves. Things got quite exciting, while trying to avoid the floating and falling panels and the other cars who were doing the same as me. After the traffic came to a complete halt, some of us got out and helped the guy collect his broken panels off the highway. Then we got back in our cars and went on. I have no idea how he managed to deal with his mess, but I'm certain that he didn't have even half of the sheets in good enough condition to use. Some people just don't grasp the damage possible when they fail to secure items to the outside of their vehicles properly.
I now try to stay far back when following anyone with building materials, especially sheet stock, tied to the outside of their cars.

Have you ever seen anyone carrying 12' long 2 X 6's sticking out both side rear windows of their car like airplane wings? I saw this one day too, and waited a long time before getting on the highway and following him. He must have survived, because I never saw him again.

Dennis
Corporate Member
I can relate, Charles. Leaving a Big Box store some years ago, the guy in front of me was loading 8 pcs. of 7/16" OSB onto his Subaru roof rack and tying it with the free baling twine they have. I asked him which way he was headed and asked him if he would give me a 10 minute head start........
You must log in or register to reply here.
Share:
Facebook Twitter Reddit Pinterest Tumblr WhatsApp Email Link