I posted some pictures for those who don't do facebook, so you could still enjoy! 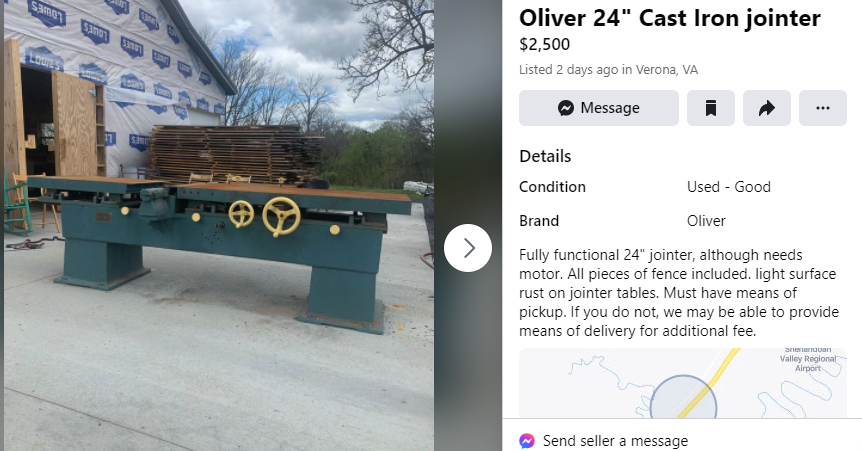 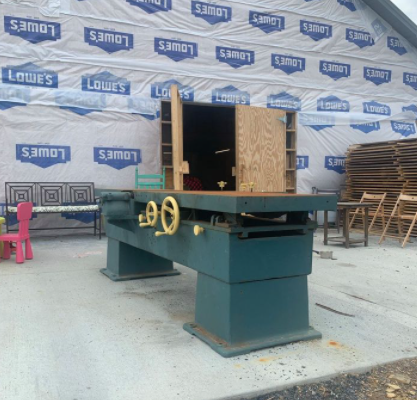 SabertoothBunny
User
$2,500 for a jointer with no motor, makes perfect sense! It is also clearly "light" rust when the entire surface is completely rusted. Just wow. Cool machine though.

SabertoothBunny said:
It is also clearly "light" rust when the entire surface is completely rusted.
Just wow. Cool machine though.
Click to expand...

I had all those same thoughts, but I would like to see it run!
It would be "THE BOSS" if you were making Roubo work benches!

Update your profile with your name
User
Based on your title, I propose that it is an aircraft carrier!
R

Robert
User
Wow that’s a Oliver 166 ED, very cool, the beast probably weights in at +2500 lbs. 24” jointers were common with casket builders, would love to own it, but have no space for that beast.

Bill
Corporate Member
I wonder what size motor would have come on it. Probably needs quite a lot of HP to joint a 24" wide board!
O

My guess is 15 hp for the motor

My guess is 15 hp for the motor
Click to expand...

Phillip
User
I have an Oliver 166 BD (12”) and wouldn’t let it go for anything...except maybe a wider 166 Mine is the same as this one, just half as wide and a bit older.

I wouldn’t worry too much about the surface rust on the tables as it would likely clean up ok, but the cutterhead bearings may need to be pulled and replaced if it’s sat outside for too long, which is getting into some work and a bit of money. Though Oliver didn’t use as expensive bearings as some other manufacturers like Porter and Yates American.

24” machines are rare, but the price is a bit optimistic without motor and having sat outside except to someone who knows exactly what it is and has the knowledge and skill to take it apart, clean it up, find the right replacement motor and probably replace bearings...which is a small but dedicated crowd.
H

HenryW
Senior User
I also don't see a fence... but then you likely don't need a 24" jointer for edge jointing - haha. If you have room for a 24" aircraft carrier you likely have room for several jointers, each dedicated to a specific task (none of this 'dual purpose machine' stuff!)

cyclopentadiene said:
Based on your title, I propose that it is an aircraft carrier!
Click to expand...

I think I saw that in Jane's Fighting Ships. 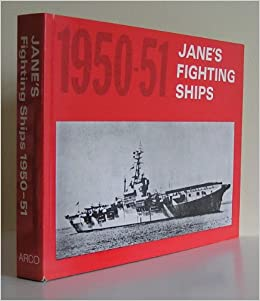