Lake table - my unique design and build (actually build and design) process - or Charlie made me do it!

John
Corporate Member
Sorry, this is a long post so I'll continue in another titled Lake Table part 2

I'm in possession of a beautiful turning of Charlie's and bookshelves don't do it justice. I needed a table to prominently present it. I had seen some live edge waterfall tables online and with not much of an idea, went to Murdock Lumber hoping lightning would strike. After turning over every board and dragging Jack around I found some beautiful burly maple. Problem was it wasn't dry. Jack said he was shipping it out to a kiln and would have it ready in a month or three. Gave him my contact info as I was in no hurry. As I was leaving I asked Jack what he was going to do with three or four pieces of some junk wood scattered on a pallet, all black and warped from being out in the elements. He said I could have a piece for $10. Well who wouldn't want to add a 14'x20" 8/4 piece to their off cut pile? Not even knowing the species, and thinking I needed some practice working live edge or waterfall type table top, we hefted it on top of my care and I forfeited my lunch money.
I should have taken a picture of it but here it is after some planing, scraping and sanding to discover what I had. 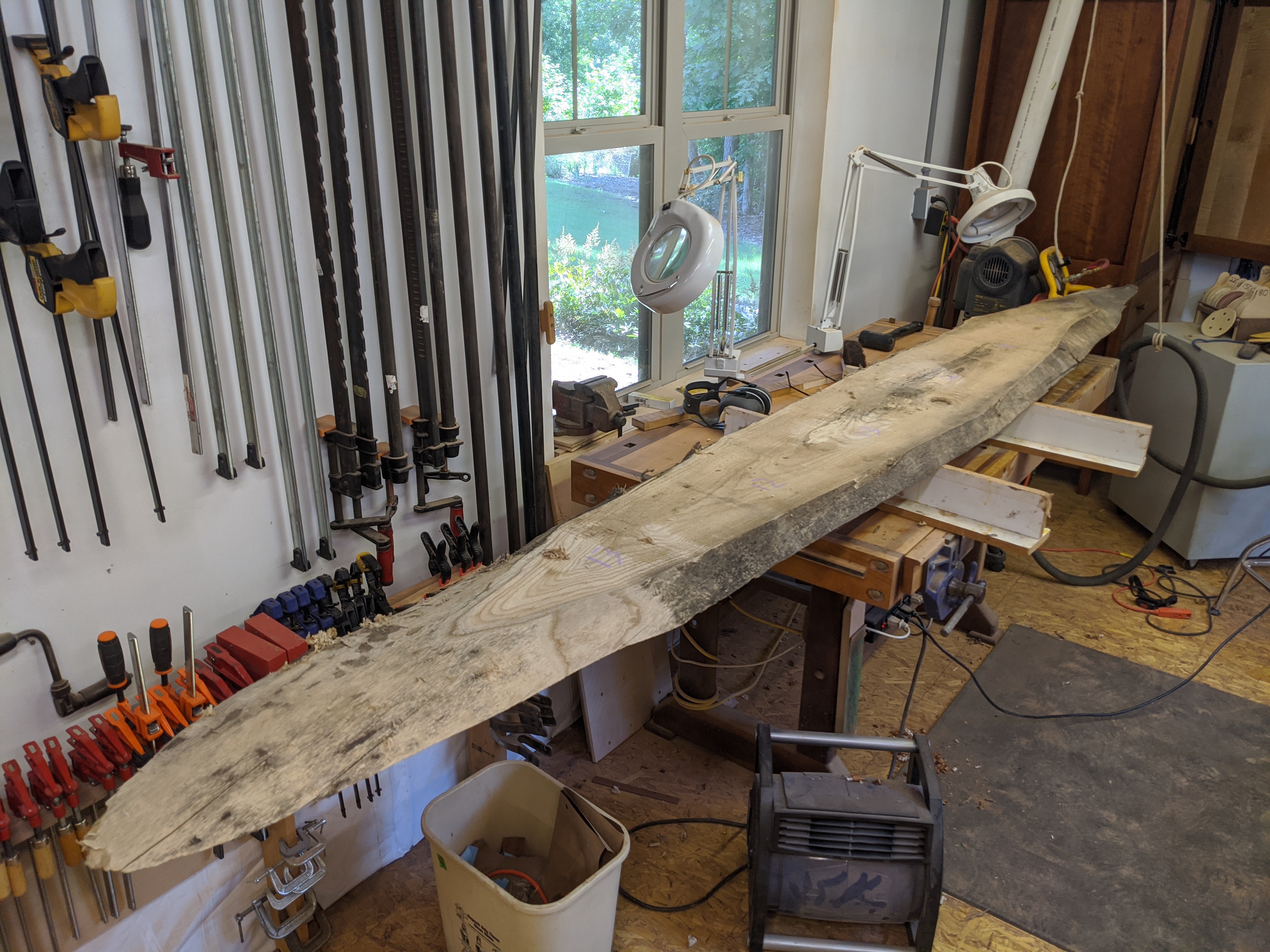 I've got some white oak and these growth rings give me something to work with. I figured a sofa table about 60" and could water fall both ends so I cut it down to 120" by a jig saw following the growth rings. I only have a 6" jointer and 13" lunch box planer. (BTW why do they call it a lunch box when there's no picture of Superman on the side?) so I had to rig up a router sled. I took some 8' pieces of ply from a deconstructed entertainment center that used to house a 500 lb. CRT TV, made some L supports and a sled. First trip (of many) to Klingspor and plopped down $68 for a flattening bit. First mistake of many was the sled you see here wasn't stiff enough- less than 1/16" deflection but I added some stiffeners after this picture. 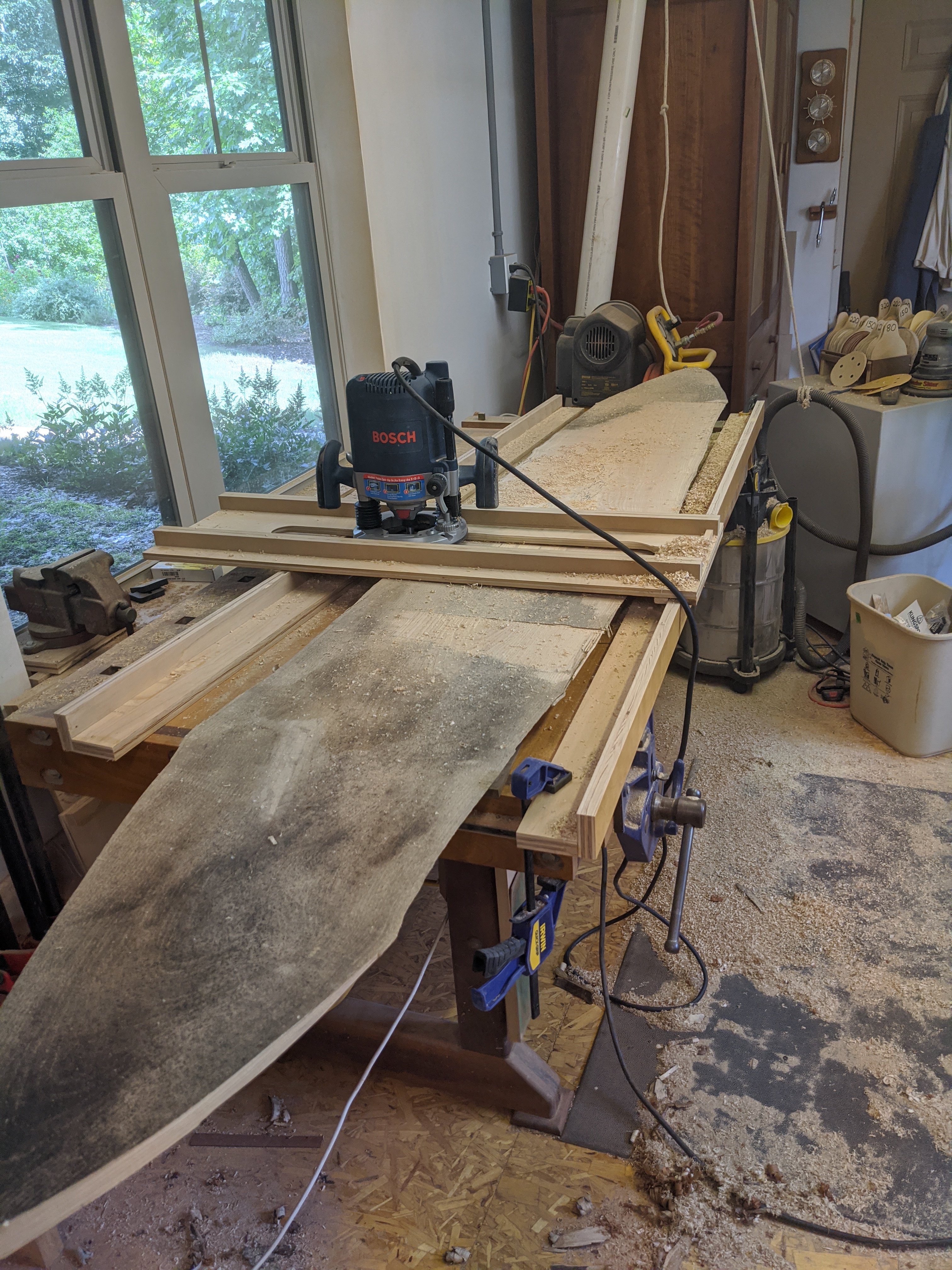 I had the piece wedged in to keep it stable so I simply extended the support rails over the end of the table to flatten the ends. After flattening one side I flipped it over, no longer needing wedges went to work on this side. Now (so I thought) instead of extending the rails over the edge of the table I could just slide the piece to continue to mill it. After milling, flipping over again (and again) with sawdust up to my knees, I figured out that when I extended the rails over the ends they deflected, and not equally, so I never had that true and flat first surface. I took two pieces of identical scrap and kept them in the same orientation to move the board back and forth with the rails fixed. My 8/4 board was by this time a flat 5/4 which fortunately turned out to be what I think is the best thickness for this project. Now to the edge!

There was a lot of punky sap wood and other defects on the edge. It didn't take long to figure out that a random orbit sander with 60 grit wasn't going to be my pal for days. Another trip to Klingspor (mostly for another project) and bought a flap sander but that wasn't any better. Thinking this through I glanced over at my tool wall and noticed a draw knife. Now I bought this at our picnic a few years ago from Mike Davis since I didn't need my lunch money that day. I really had no idea if I'd ever use it but you know how it is - such a deal and i might need that toolitis! Mike had given it a keen edge and it sliced off that sapwood like (frozen) butter. What a joy to discover how to use another hand tool rather than losing another few decibels of hearing loss. With all the effort so far it started looking like this might end up with a decent project, not just a training exercise. AT this point the draw knife was too aggressive to deal with the nuances of the edge and the ROS wasn't aggressive enough, especially on the ends. Out came MORE POWER! An angle grinder with a 40 grit disc let me think I was Rodin! I sculpted away what didn't belong-and some that did - until I had nearly the shape I wanted. 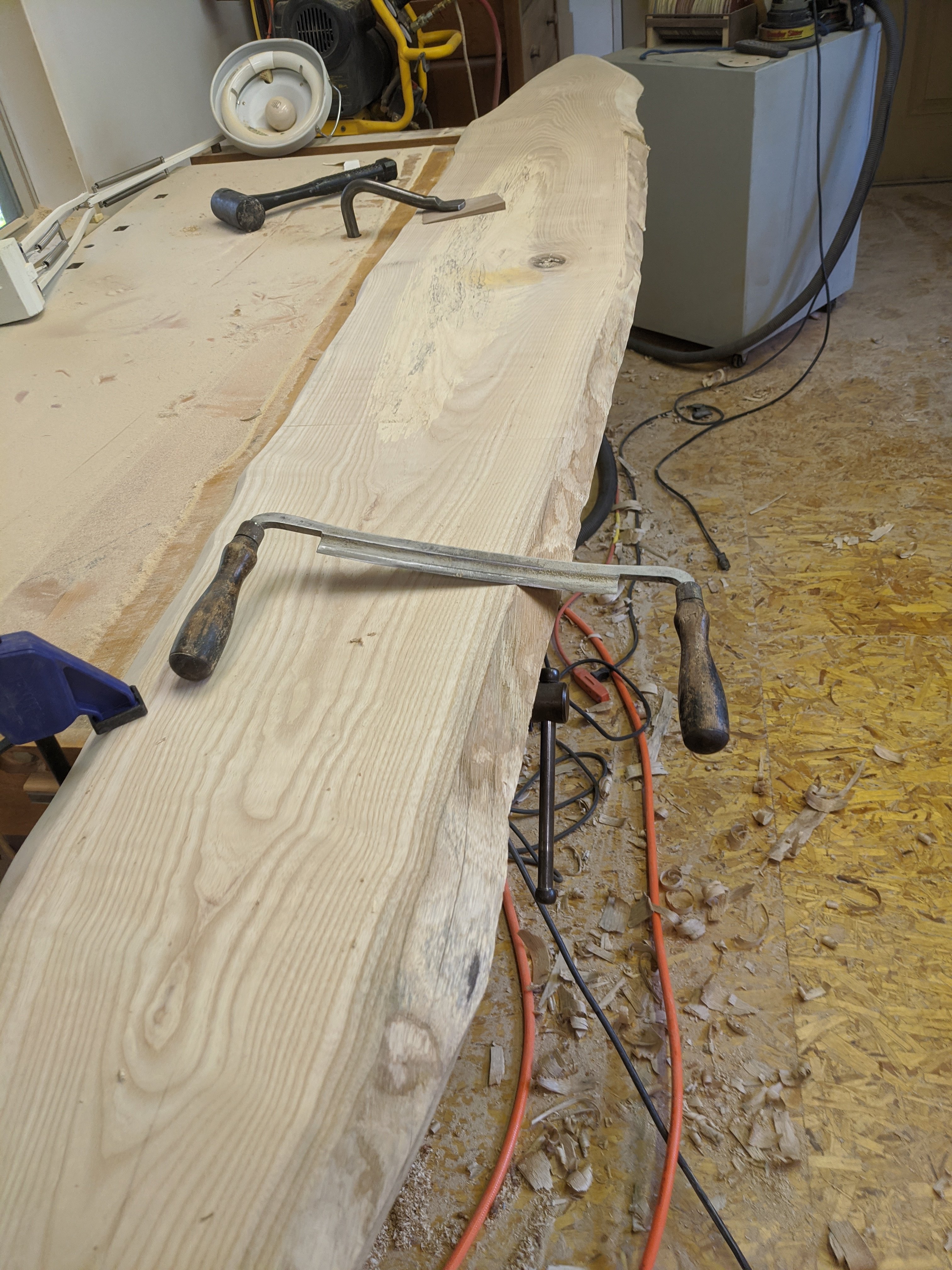 Next issue was the center of the table. It had some really funky issues. I like the idea of keeping defects, and even emphasizing them, but "this weren't them." I saw this before flattening and tried some dye and stain on it but it looked like what came out after spending my lunch money on the wrong oysters. 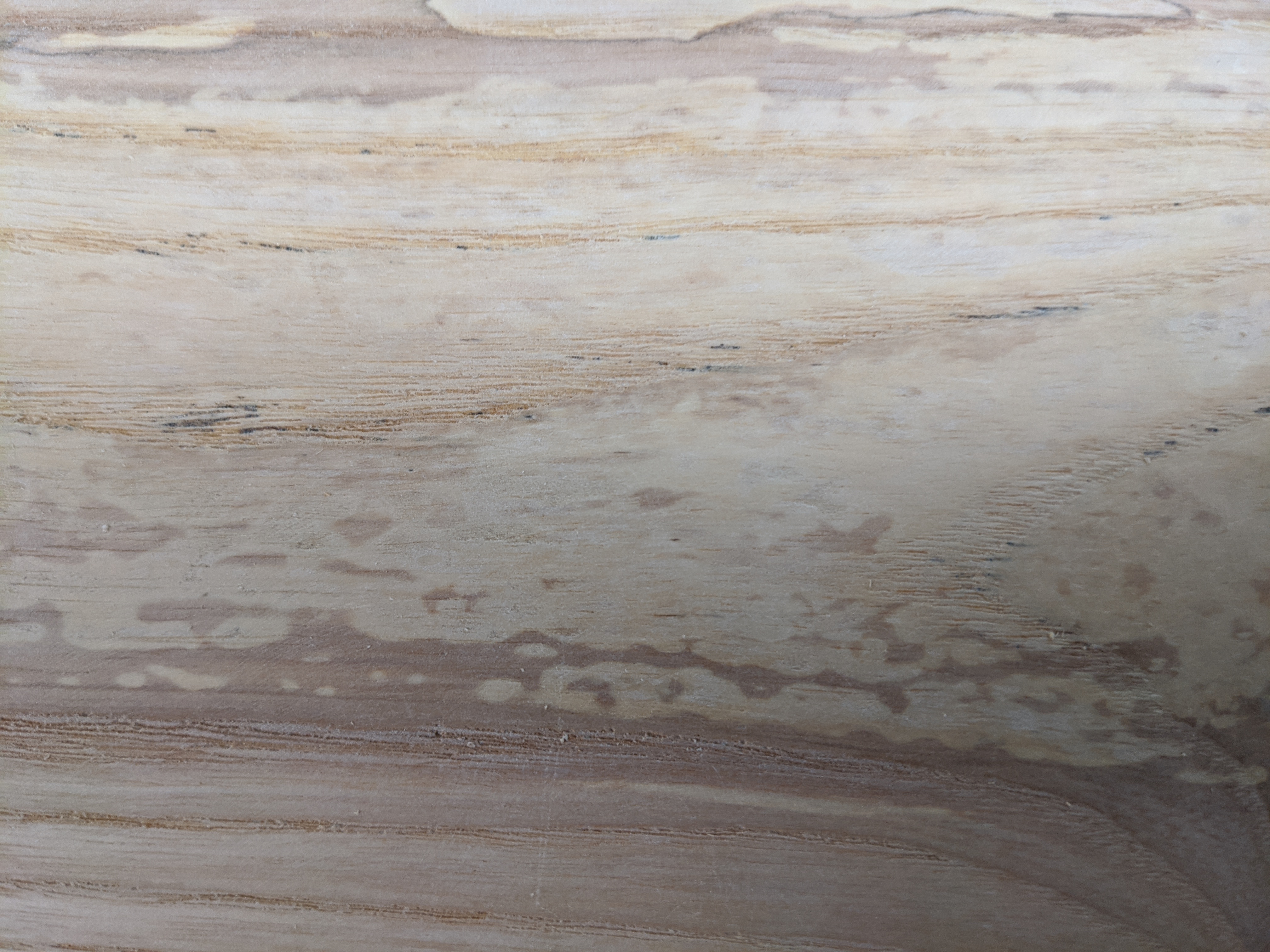 Time to put this aside and lose a lot of sleep thinking it through. On to the legs!

A lot of what I'd seen online had metal legs or standard four legs and apron construction. This called for something more organic. Since this was still just an exercise I looked around my left overs. I had made a headboard out of white oak sourced from Scott Smith and had ripped and angled a lot of 5' strips to create a washboard look. After a dry fit I just didn't like the look and sent them to spend some time commiserating with other failed ideas. Anyhow I flattened them and ripped off the leftover angled piece to make some bent lamination legs. Now when I depart from square construction into the dark world of curves and angles my brain feels like I too quickly sucked down that freezing milkshake. Many more sleepless nights later I came up with a way to design the legs. Taking the rails I made for the sled, and spacing them 28 1/2" apart over construction paper, using a curved (I know there's a name for it) thingy I traced out the legs. Four of the same and two longer/wider? for more longitudinal support for the ends. 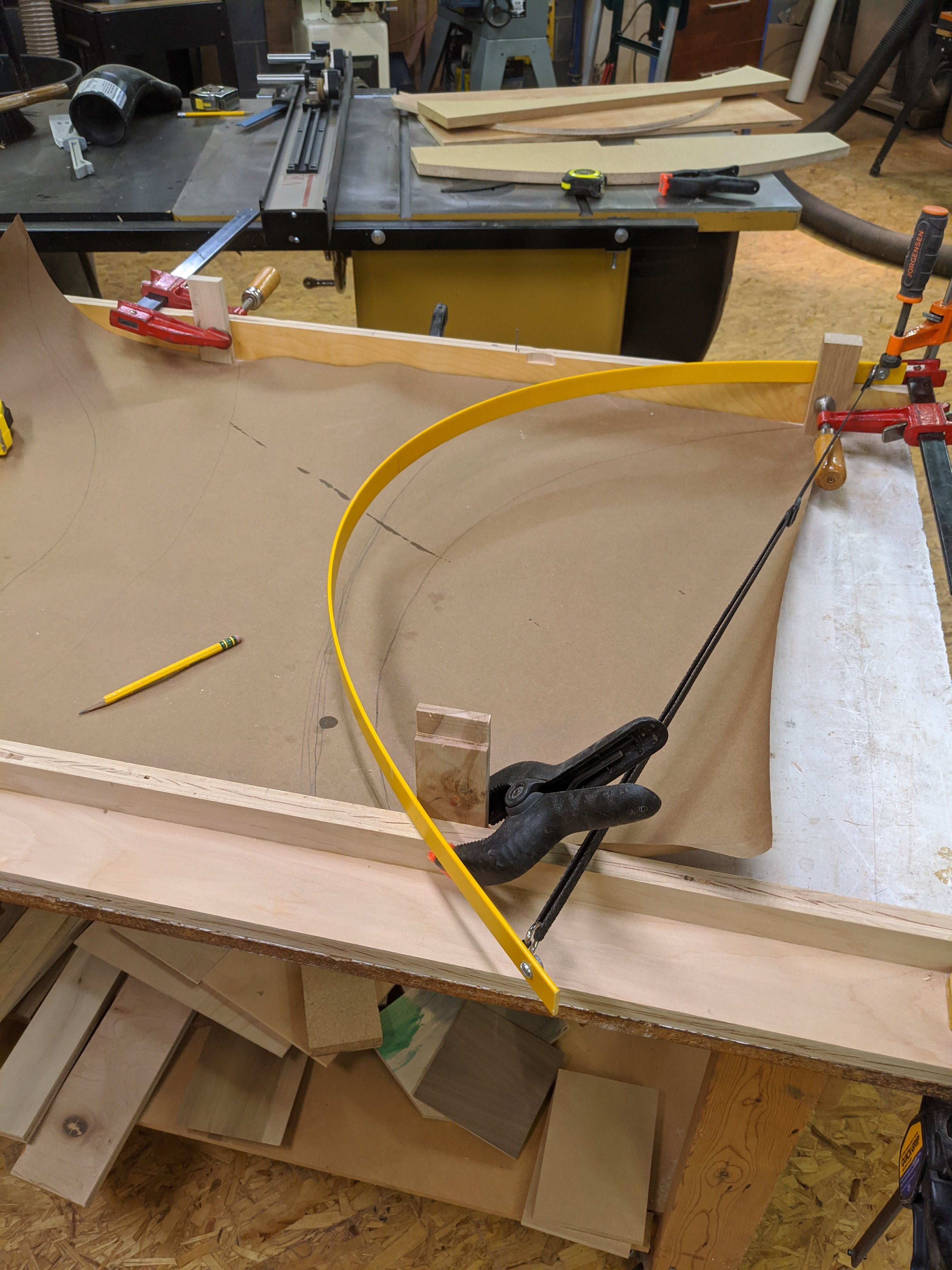 I now had a pattern which I used to cut out some scrap mdf and particle board (in the rear of the picture) for a jig. I laminated the two long legs but when I went to do the shorter ones, the strips I had were a couple inches short. All the other oak I had was also just short. At this point the question was - Is this just a practice run or am I making something that my wife would allow through the door? 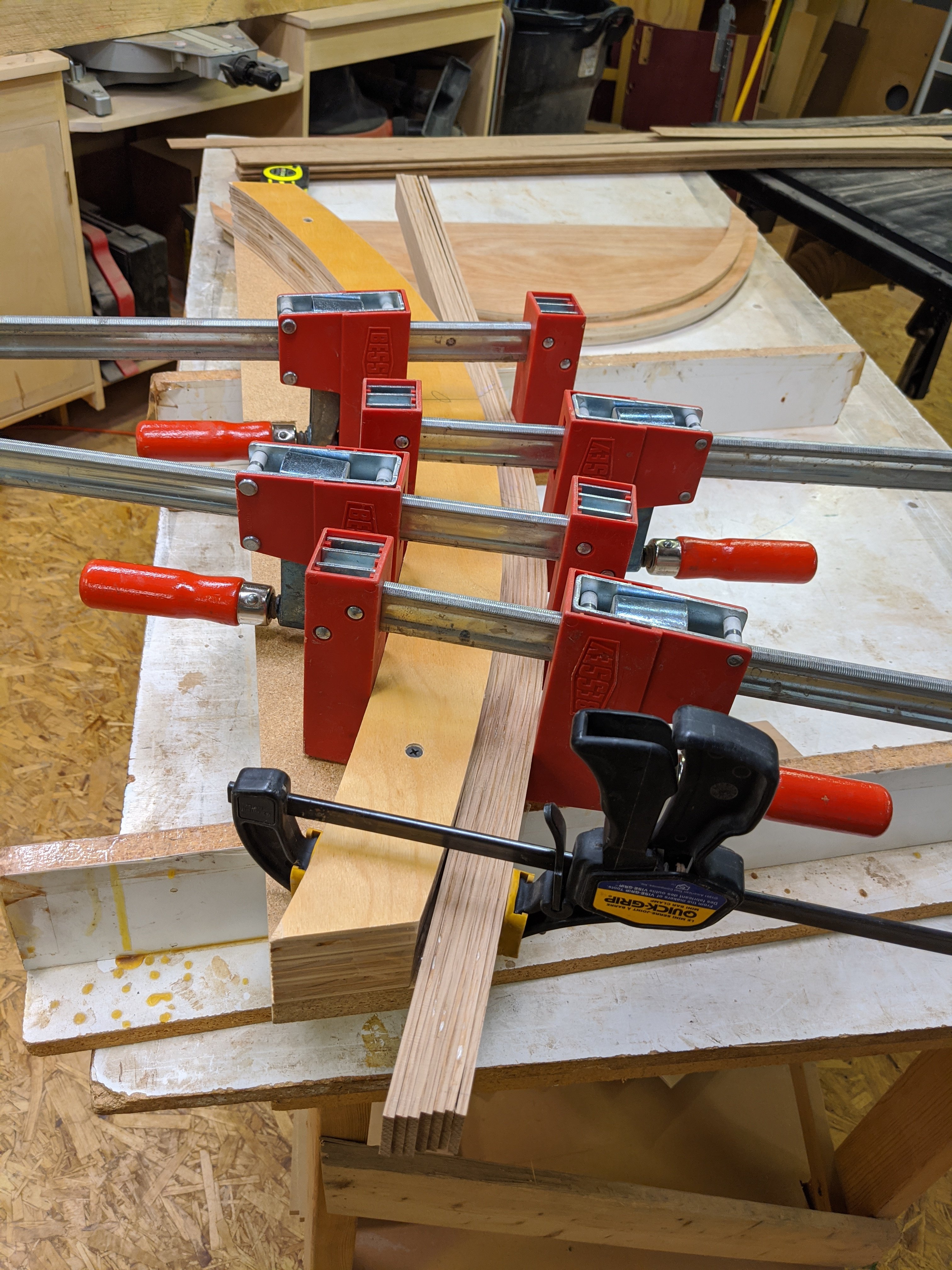 Picture of dry fit. Well what the hell, It's Saturday, I'm suddenly and uncharacteristically energized, Jack and Scott don't answer their phones and so it's off to Klingspor for more dead trees. I needed at least 1 1/2" wide finished and they only had 8/4 so looked over their 14' stock. It all looked a lot darker and redder than the top and I questioned if it was actually red oak - isn't red oak red? Anyway, I picked out the one with the straightest grain and instead of asking them to chop off what I needed (as usual I didn't bring specs with me) figured I could always use the remainder - until the shock of $150 had me second guessing myself. At least after surfacing and ripping it into strips I was convinced by the flecks and grain that it was indeed white oak despite being a little darker than the top. With energy waning, a few weeks later I had six legs laminated and shaped. Note - I ripped into 3/16" strips, there were a couple places with knots that refused to bend as easily and left small gaps that I had to fill so next time I'd use thinner strips. Now how in H do I attach these to each other and the table? First I had to cut parallel ends. Decided to re-clamp them to the form and cut through the legs and the form using the miter bar. Of course I had to disassemble the forms to make sure the blade didn't encounter any screws and set off the blade brake, oh yeah, I forgot, I don't have a Saw Stop and I had the fingers to prove it, but I did want to save the blade. 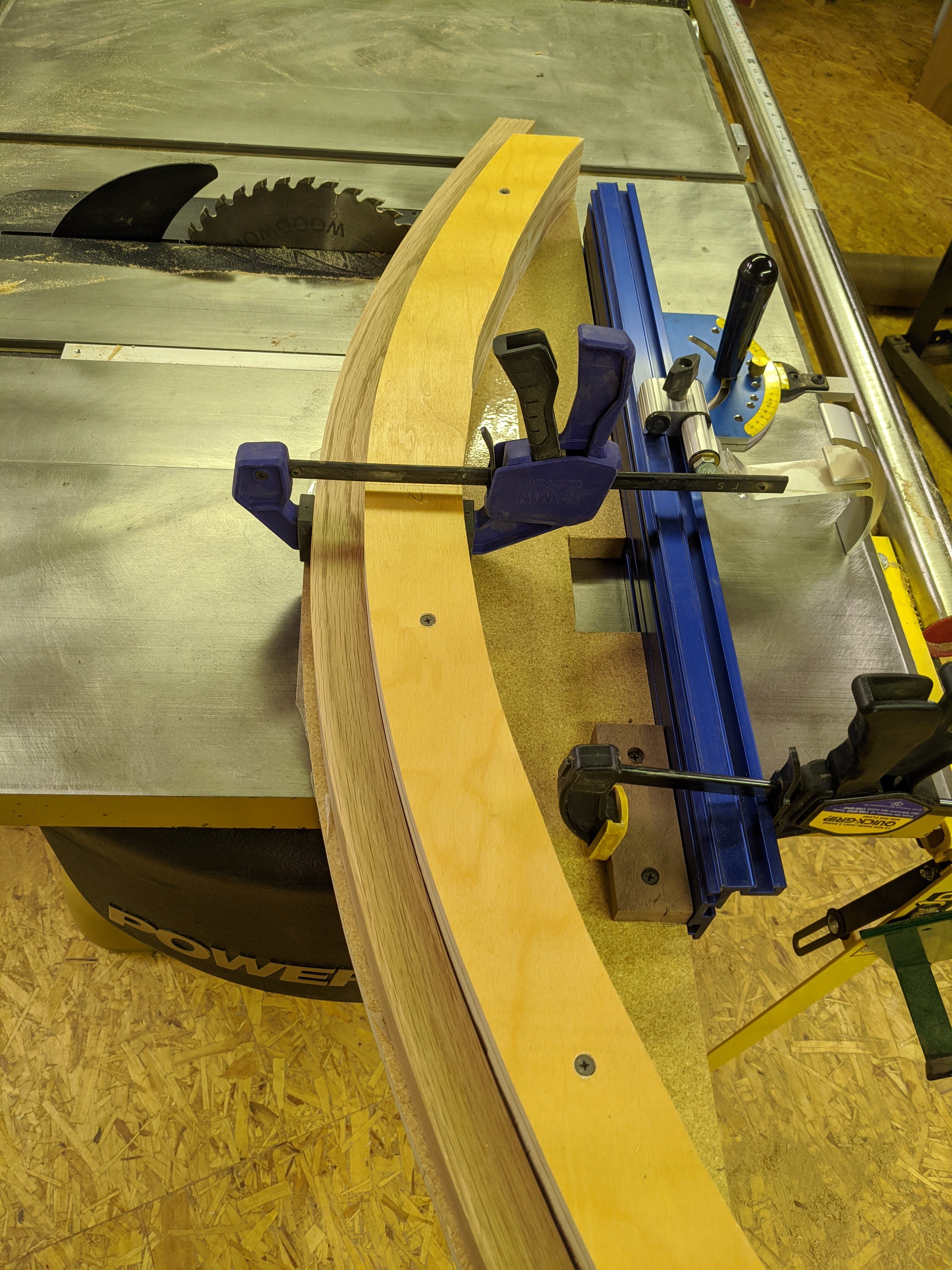 Now how to join them. After more sleepless nights conjugating this dilema I pretended I had 5 hands to clamp it up and see how it fit on the table bottom (guess I really hadn't shaped them yet) still playing with the long leg orientation before chopping it.

Continued.... because of word limit, see Lake Table part 2 and you'll have to click on attachments to see pictures.

Casey
Staff member
Corporate Member
Awesome ! nicely done ! I saw a guy who did one of these and he dado'd LED lights into the epoxy on the bottom to illuminate, kinda cool effect, buy not necessary. Either way, beautiful

Jim
Staff member
Corporate Member
That turned out really, really nice! Good job! Really like the final design. Thanks for sharing the details.

Oka said:
Awesome ! nicely done ! I saw a guy who did one of these and he dado'd LED lights into the epoxy on the bottom to illuminate, kinda cool effect, buy not necessary. Either way, beautiful
Click to expand...

Thanks Casey, that's still in the when of possibilities, would out then covered away fro the epoxy to diffuse the light bulbs.

Donn
Corporate Member
John, beautiful table and a great narrative! Not only is it a beautiful table, you can rest assured that there in no other like it - anywhere!

JohnnyR said:
Thanks Casey, that's still in the when of possibilities, would out then covered away fro the epoxy to diffuse the light bulbs.
Click to expand...

Matt
Corporate Member
John, that is beautiful work. Thanks for sharing it.