Intercom for shop and house

Jim
Senior User
Tough to know where to post this, but I put it in Safety & Health.

My shop is a 2-story garage about 50-60 feet behind our house. I've tried a couple of different options for communications between the two over the years. Nothing wireless really worked very well. I've tried CB radios. Worked, but carrying a radio between rooms in the house wasn't good and everyone can hear your business. Wife hated it. Wireless phones weren't reliable and SWMBO didn't like that either. Nothing that had to be carried around was acceptable to SWMBO. I finally stumbled across a wireless, full duplex multi unit intercom on Amazon. 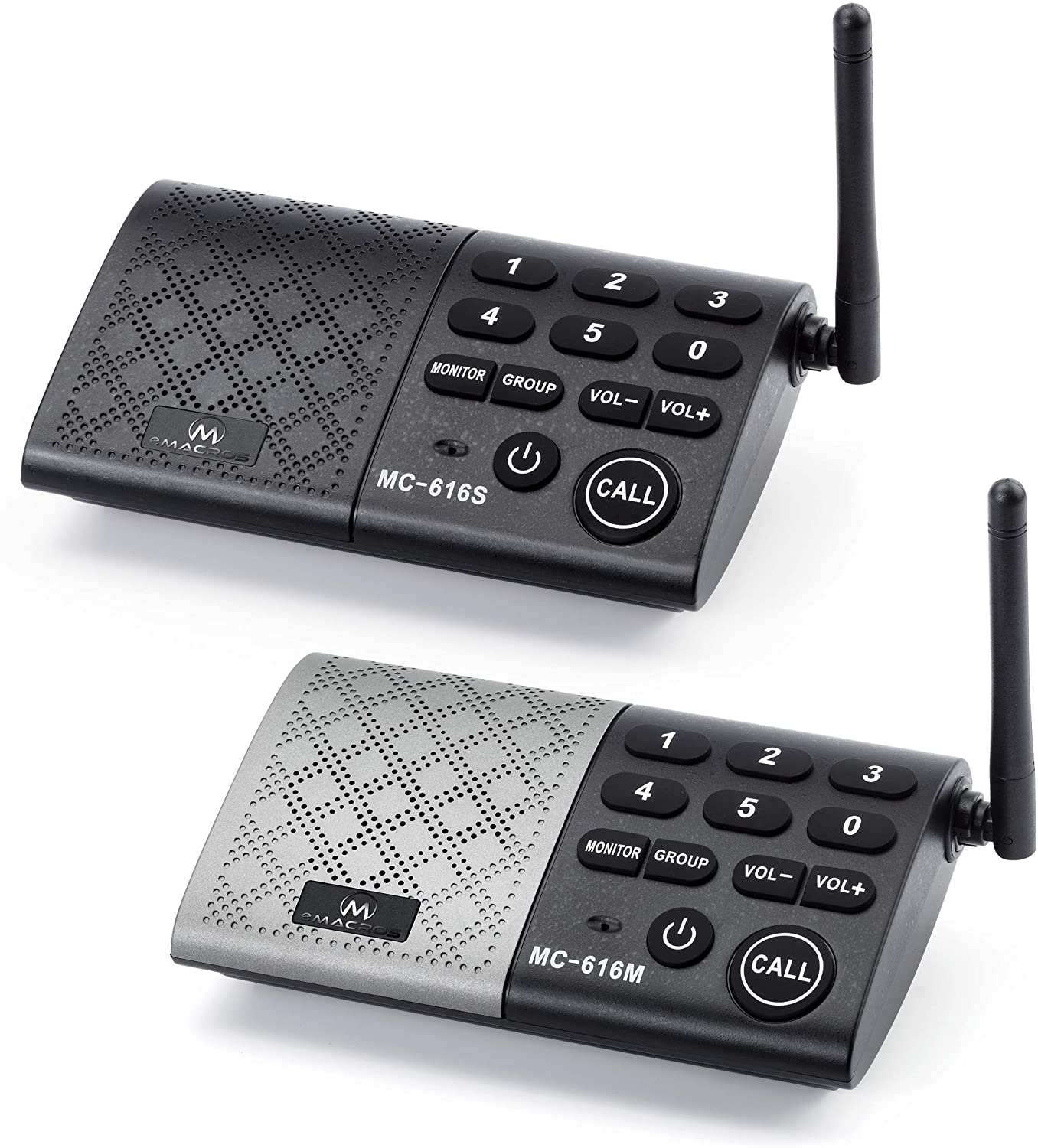 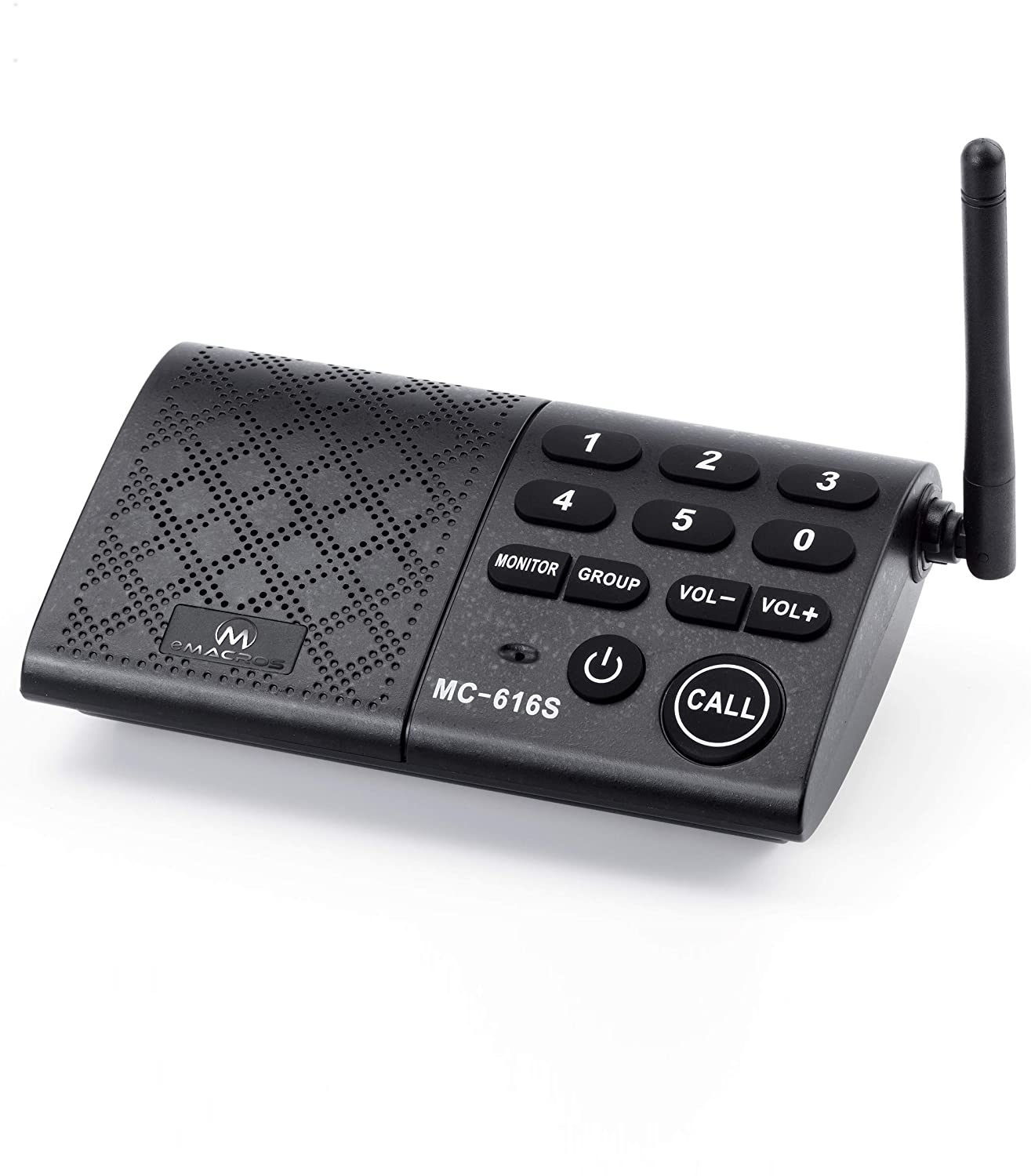 It consists of one master and up to 5 slaves. You can buy it as packages with up to 3 slaves and order individual slaves as well. Each unit can communicate with all other units individually or as a group. The only difference between a slave and a master is that the master is used for configuring (a simple button sequence) the slave's number, 1-5. The next unassigned number is used automatically when doing the configuration.

There is also another brand, HOSMART, that looks the same and units from both brands can work together. I originally ordered a single HOSMART slave and master to test with. Then couldn't get 2 additional HOSMART slaves shipped in a timely manner. I asked the eMACROS vendor about compatibility since they look identical except for markings and was assured they were they same unit under the paint. I ordered two eMACROS slaves (Amazon) and got those in 2 days.

Today I received and configured the 2 eMACROS slaves and put one in the shop. I just put it where I wanted it without regard for things like metal garage doors. It worked like a charm between the shop and SWMBO's sewing room in the far side of the house from the shop. Crystal clear audio without any signs of noise at all.

Full duplex means both sides can talk at the same time. I can handle push-to-talk just fine but SWMBO has never been able to understand that 1) she has to push the button and hold it the whole time she is talking, 2) she cannot start talking until after the button has been pushed and stayed pushed for a second or two to wake up the far end, 3) you don't let up on the button until after you have finished saying the last word, and finally 4) you absolutely cannot interrupt the other end by pushing your button while the other person is still talking; the other side won't hear you at all.

These units are full duplex with no push to talk. You just hit the call button to answer and talk hands free. If you are not sure which unit is where the other person is then you can call all the units as a group call and the other person just answers wherever they are.

The units can have battery backup via an 18650 rechargeable battery. The units will keep the battery charged. I used a separate charger to charge up the new batteries and cannot say how quick the units can charge an empty battery.

They units have a monitor function as well. If you are in the shop but need to be able to monitor someone in the house, maybe for health reasons, these units will do that. If you are in the shop and need help, and can reach the unit of course, then this system is what you need. I have heard a rumor that there is a panic device for these but so far I haven't been able to confirm or deny the truth of that.

Bottom, line is these are quality units that just work.

Raymond
Corporate Member
Thanks for the review, Jim.
J

Pop
Corporate Member
Jim, How much $$.

Matt
Senior User
We use our cell phones...

Dennis
Corporate Member
They used to make an old school version of this that worked on the 120v outlets in your home. It would work on any outlets served by the same transformer. Not sure they are around anymore as I think they were a Radio Shack item.
N

Gotcha6 said:
They used to make an old school version of this that worked on the 120v outlets in your home. It would work on any outlets served by the same transformer. Not sure they are around anymore as I think they were a Radio Shack item.
Click to expand...

I've used those kind of things many years ago before I had a shop. The ones I had came from Radio Shack too. They were half duplex push-to-talk. I'm not sure that type of unit ever really had more than two units. My initial post tells the sad tale of SWMBO, push-to-talk half duplex, and units that have to be moved from room to room. Same reasons she cannot handle FRS walkie talkies.
B

Bob Vaughan
Senior User
We still have four working units of a Radio Shack intercom that goes through the telephone lines. its been around for decades but still works. A few years back, wife bought several back up units from eBay since those things are now considered 'vintage' (a polite phrase for obsolete). I wouldn't be without that function. Its a real time saver and voice saver. Cell phones are OK if you want to carry one while working in the shop.
A

Newb
Senior User
We've got a couple "Alexa" devices that do the trick.
R

Roger
User
We use Amazon Echo Dot for our communications less then 50.00 for a pair. They are hands free just say Alexia drop in shop and the wife can talk to me. The major advantage is if I get hurt I don’t have to push any buttons I can be laying on the floor holding a cut and still call for help. Just yell Alexia call 911 or Alexia drop in kitchen and help is on the way. Next it is also my music provider when working just say Alexia play the latest music of your choice.

Ken
Staff member
Corporate Member
That's a good idea. I've got some Amazon Echo Spots around the house - could just add one in the shop. I use the one in my office to read my Audible books to me. Occasionally use them to play music. Need to hook them up to the XM radios - they can do that now.
N

Jim
Senior User
WIFI is sporadic down at my shop. The distance between the shop and the house as well as the metallic obstructions like the garage doors just makes WIFI problematic. I don't believe that the Amazon Echos or Alexas would work for me. They require a WIFI connection, right?

I could install WIFI extenders, but then the cost becomes a factor. Then there are the privacy issues with Amazon devices. Mainly because of privacy issues I don't own any of those devices. And won't. It's a choice.

What bandwidth I do have between the shop and house is eaten up by hi-res security camera feeds. I have 2 cams down there. One watching the back of the house and yard and the other watching the inside of the shop. They are not WIFI. They are both on the internal ethernet segment in the shop that goes across a bridged router via WIFI to connect up to the house. That bridged router connection over WIFI is the unreliable connection between the two buildings and the bandwidth bottleneck.
Last edited: Sep 6, 2020
K

Ken
User
When I built my shop and house. I too was worried about WIFI between them.
I had the electrician install an under ground conduit between my shop and house mechanical room.
Then I pulled a Cat6 Ethernet cable in the conduit and placed a switch at both ends.
Since the shop has plywood walls (screwed on). I can drop Ethernet connections anywhere I want.

On the plus side, I was able to get WIFI extenders to reach the shop. So now it has both WIFI and hardwire.
N

Jim
Senior User
In hindsight I should have had underground conduits installed when my shop was built too. At the time I was just excited to get a shop and the prospect of all the new tools to buy.

Scott
Staff member
Corporate Member
I have a portable phone/answering machine which came with the main base unit and two other phones with bases. I have had it for 8-9 years. It has a intercom feature though I doubt my wife knows how to use it. The main unit is in the kitchen. The other phones are in the bedroom and my shop. Beside that I have my cell phone on me almost always.
You must log in or register to reply here.
Share:
Facebook Twitter Reddit Pinterest Tumblr WhatsApp Email Link