wndopdlr said:
What about used? I have an older Rockwell radial drill press that I have owned since the early 70's and it has served me well for all these years. Not sure if it would be considered bench top or not. I threw away the sheet metal stand a long time ago and built a wooden stand with storage slide outs underneath to better utilize space.
Click to expand...

Here's what I think Wally is talking about. The model 11-280. Delta also made a radial drill press model 15-126 but you don't want to go there just yet. 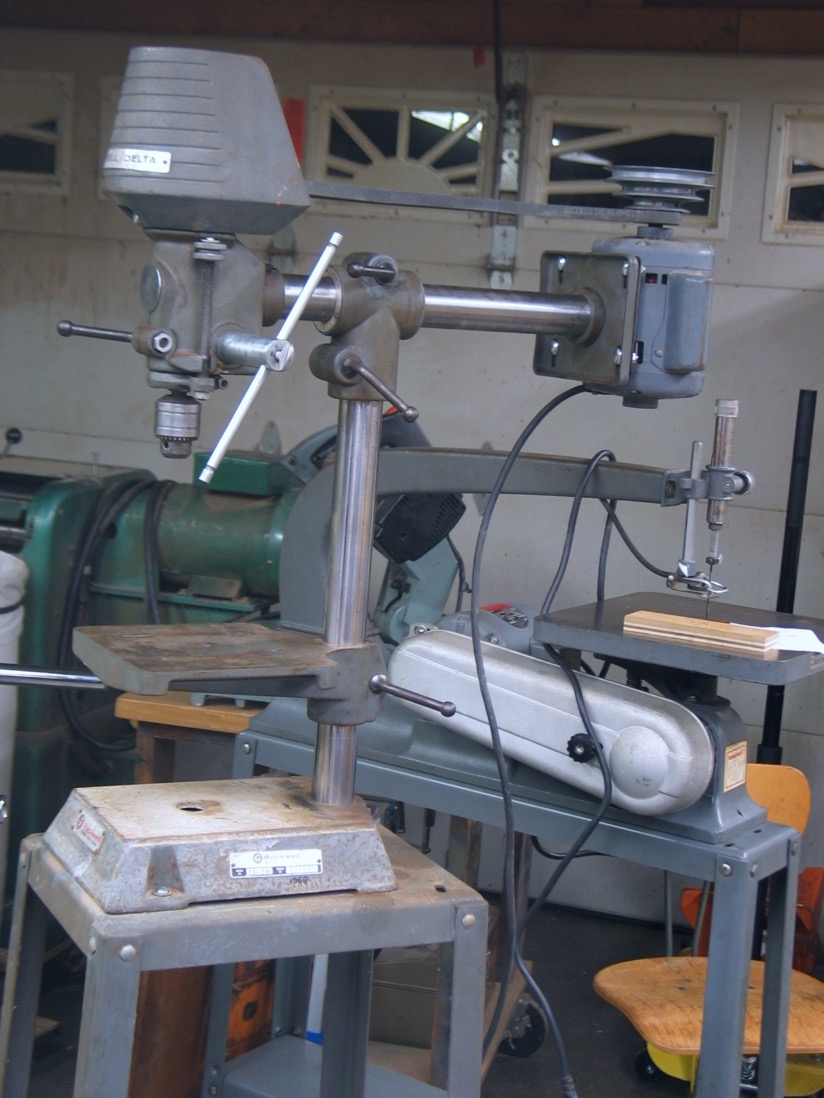 Just look around the shop clutter. This is a 1968 version. Later ones had different cosmetics but mechanically the same.

bob vaughan said:
That Delta radial drill has about a 3-1/2" throw but is a very versatile little press for its size. Yes, I would agree it would be classified as a bench top.

As to how to judge "throw", AKA "quill range", just lower the quill until it stops and put a ruler against it.

View attachment 195478
Above is a 4" throw Delta DP 220 originally made in 1940. It was a bench top press when I got it. I did some work on it and subsequently found a floor length column for it and a nice wide base off of a Powermatic 1100 press.

View attachment 195479
This is a fairly "modern" 6" throw press that I'm working on and thus no depth stop collar. This is a Delta 15-665 known as a 6x6. 6" throw and six speeds. Considering the predictable durability of these presses, a 1975 model is somewhat new. This press was also available in a bench top version.

Note that both of these presses have a split casting in the front. This allows the user to tighten the bore of the head casting for the most precise fit. A non adjustable bore in a drill press head means that when the casting wears from use, that's it for whatever fit was there when the press was new.
Click to expand...

The other advantage of the split casting is an easier way to lock the quill vertically. Has anyone ever thought about knurling to r size the quill column when a fixed bore unit wears out, or is it time to make a boat anchor when that happens? What about wear bushings or brass jib pieces?
B

Gotcha6 said:
Has anyone ever thought about knurling to r size the quill column when a fixed bore unit wears out, or is it time to make a boat anchor when that happens? What about wear bushings or brass jib pieces?
Click to expand...

I once had a fixed bore press that had a worn bore. I considered the time it would take to make the setup to bore the head and sold the press.

You're right about the split casting type making it easy to securely lock the quill at any depth for fixture setups. I'd forgotten to mention that. It takes about five to ten minutes to get the adjusting nut set right so its easy to lock the quill and still have accurate travel.

I think I was like most people when I got a drill press. I'd been frustrated with not getting holes square to the stock and at predictable distances from given edges when using a hand held drill. I got a drill press and all was good, at least for a while. As time went on, I started getting larger wood boring bits as my projects required. This resulted in needing a press with a longer throw and larger capacity. Our woodworking needs and experiences evolve as we keep learning and challenging ourselves. The trick is never stop doing that. A flimsy little bench top press will beat the heck out of a hand held drill in many wood boring applications.
You must log in or register to reply here.
Share:
Facebook Twitter Reddit Pinterest Tumblr WhatsApp Email Link