tvrgeek
User
Finally got around to doing some detail on the house front. Who on earth paints a "Craftsman" house trim white, I don't know, but in the process of trim paint, I added a little detail to the front porch. It had plain 6 x 6 posts, which I found out were never tied in! Hand rail down the steps is next.

Anyway, bust boxed them out and a bit of paint does wonders. 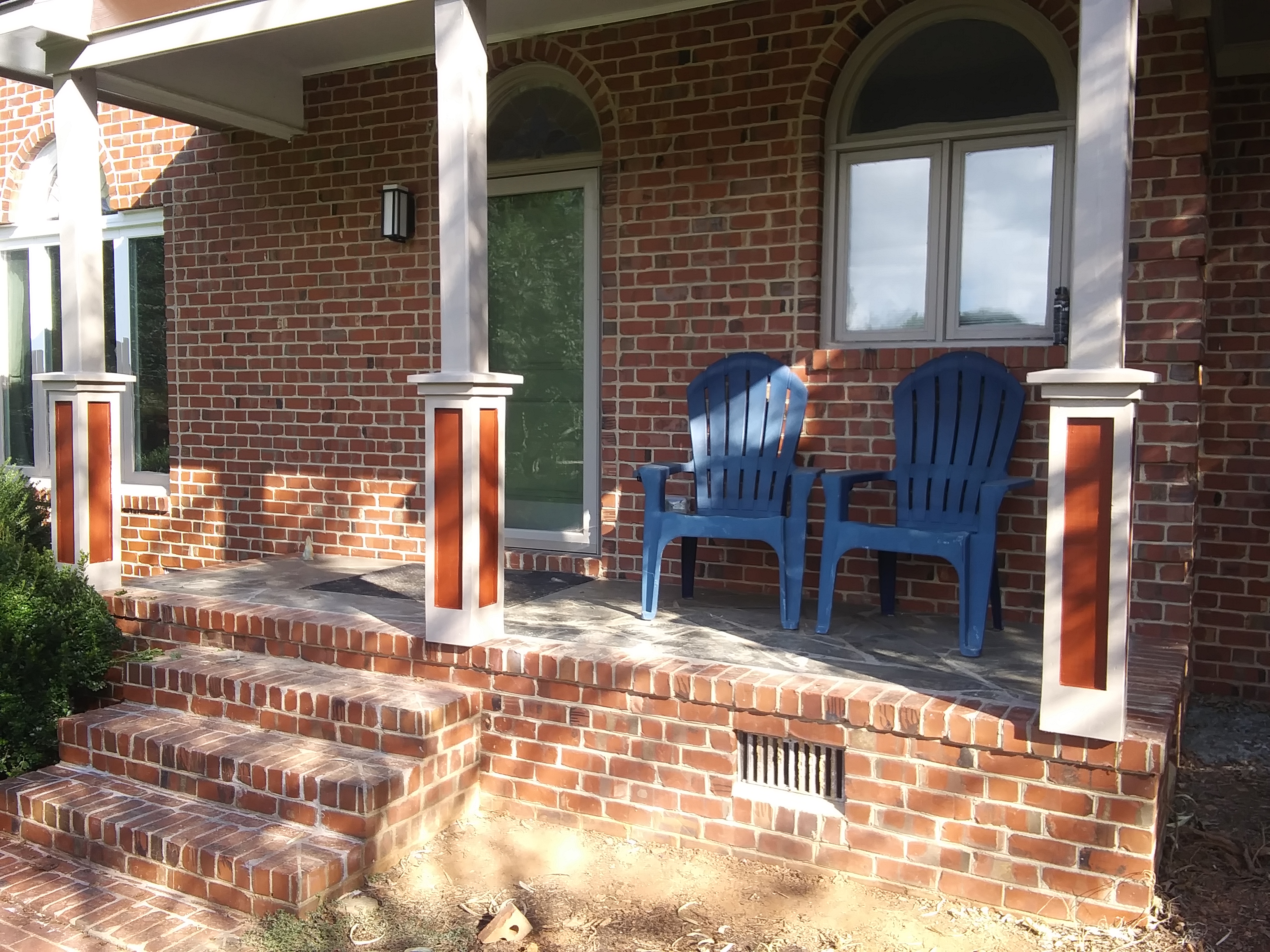 Oka
Corporate Member
Nice ! , a suggestion on the bottom of the box outs where it overhangs the porch, might add an detail piece of return trim. It might add to the focal point.

tvrgeek
User
Oka, I thought about that, but I think it wil be hidden when I replant the shrubs. . I'll wait and see. My biggest problem now is figuring how to paint the upper gable and the corners of the eve where I can't get a ladder stable. I just don't feel comfortable doing things like I did 40 years ago.
O

Oka
Corporate Member
Platform ladders platform/podium ladder we have to use on military bases they are stable are safer to work on something to think about.

tvrgeek
User
Yup, gives a handhold. I need to be much higher, Ordered a 3-tier scaffold from HD. At least it is free shipping to store. Renting was not going to cut it.

What the market needs is ladder stabilizers that have an adjustable stand off. Mine are only about a foot, so that leaves you reaching behind you to paint. I tried some ladder jacks, but again, just could not get things positioned where I felt safe. I thought about renting a bucket, but there are places even that would not get me to like where the upper gable meats the lower one. I can then go put up aluminum on my shop gables so I never have to get up there again either.

Bstrom
User
While white is my default interior favorite for virtually all trim I own, it is an odd choice for a Craftsman home. My house has a chocolate brown exterior trim that I love As it gives a rustic look to a fairly simple rancher.

tvrgeek
User
Same problem with all the Southern Colonials painted white. Originally they had brighter colors. White was because that was all that was available during the Civil War. Black shutters? Maybe on a Federal, not on a Southern. ( But I don't go for the Haint Blue to ward off evil spirits either) So sad, there is a fantastic Victorian with all the trim in place on St. Mary's road in Hillsborough. Solid white. Where is the 5 color Victorian boldness? A cape on the northern beach, light blue with white. Works. A ranch has a lot of opportunities, but multi-grays or multi-earth tones usually work depending on the surroundings. I guess the worst is Phoenix where thousands of houses only vary in what tint of Terra Cota roof with slight shades of tan stucco. You don't even know what neighborhood you are in. Just adding bump-outs and gables is not "architecture"

tyles were developed over time as what works. When pushing too far off, you had better know what you are doing as usually, the classic style, be it Federal Colonial, mid-century modern, Cape, etc, will work the best. Of course, we then had Levitt & Sons," little houses made of ticky-tack, little houses all the same" to paraphrase Pete Seeger. All trim white. All insides magnolia. No respect for architecture, just how to house returning veteran families cheap. On my house, mostly brick, the white trim just jumped out as garish. My shop is solid dark brown as I want it to disappear. I was looking at my shed today. It is barn red. I think it should be dark green. With a few bushes, it will fade into the woods.

Interior trim I prefer a bit off white. How off and what tint depends on a lot of other questions. Pure white works in mid-century better. In reality, I like like wood. Trim needs to tie the rooms together allowing freedom in the walls and style.

OK, tonight's rant is over. I love residential architecture. Even thought about it until I found out it takes 12 years to become licensed. Later I found out they need a structural engineer to sign off and if an engineer, you can practice architecture!
O