Bas
Corporate Member
I'm replacing the shower doors in one of the bathrooms. It's a semi-frameless style with two sliding glass doors, virtually identical to what was in there before. Note the key word "virtually". After spending a fun half day scraping away old silicone caulk (still not done...this stuff outlasts cockroaches!), I put the new side pieces against the wall to start marking where to drill the holes.

The bottom hole location is fine, but the middle one is not. The hole in the new side frame is about 3/16" lower than the original one, so the edge of the new hole would touch the old one. Obviously, a recipe for disaster. The top hole (not pictured) is offset by 1/4", which is tighter than I like but I think it'll be OK. 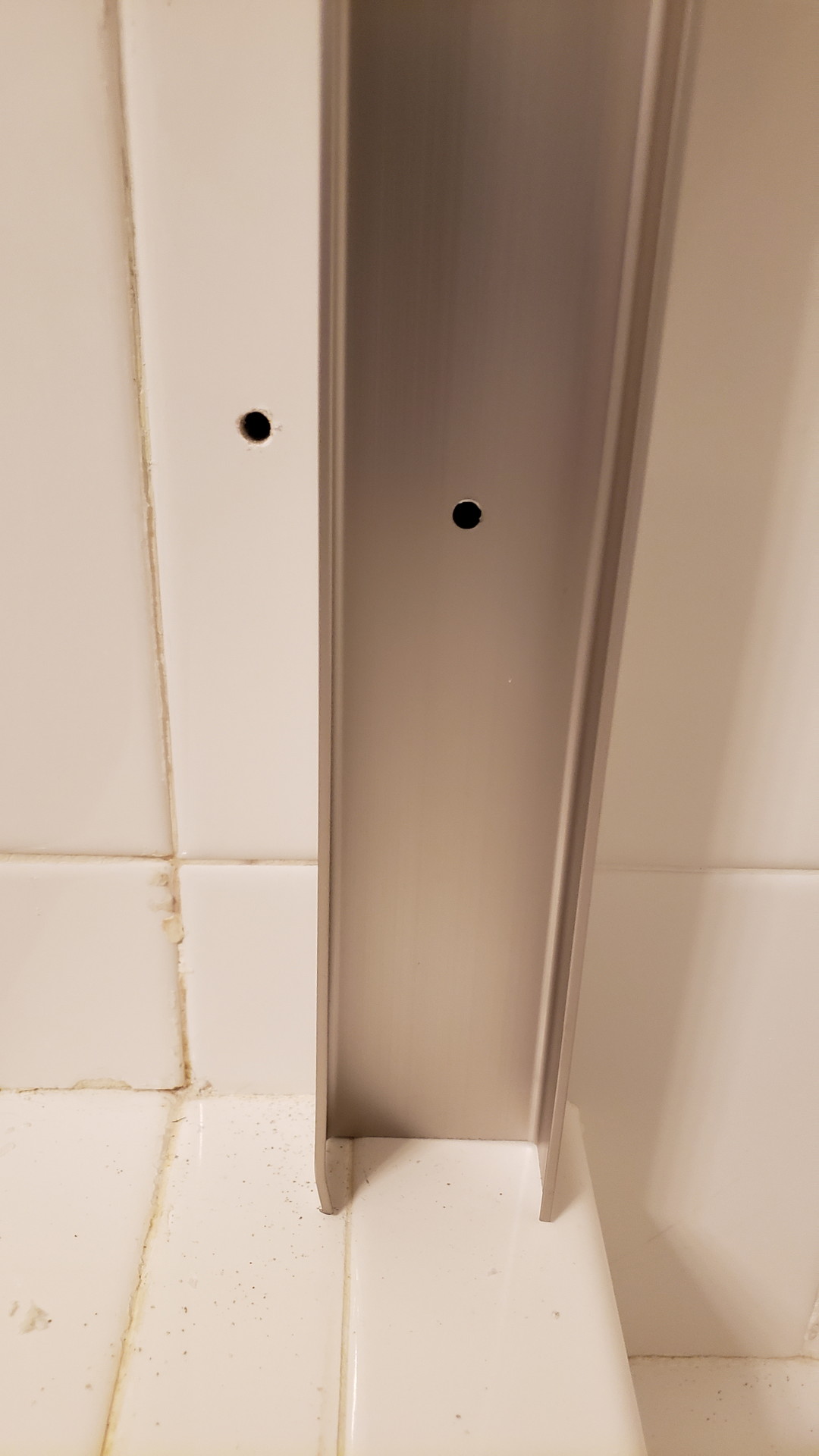 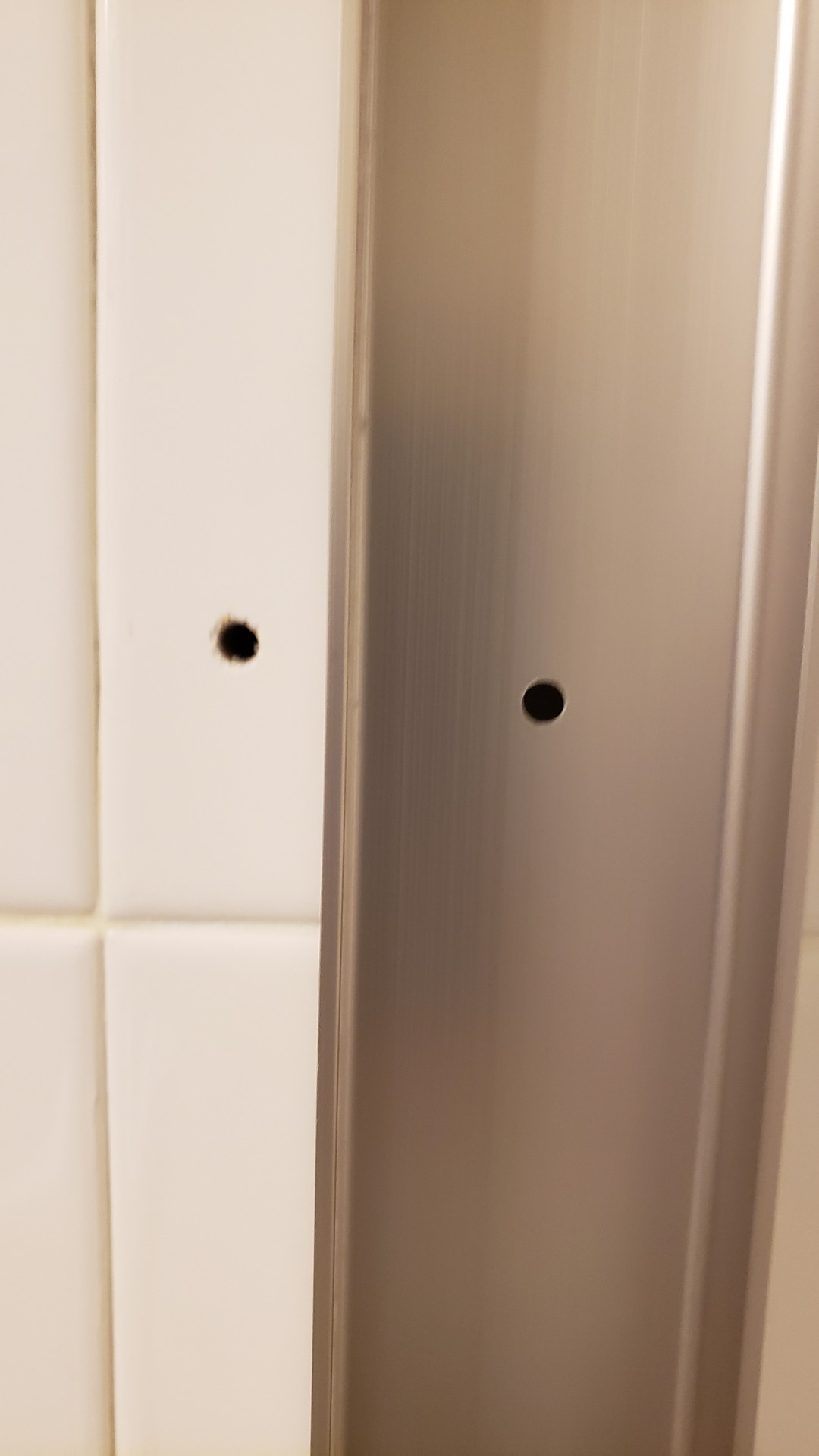 Shower door enclosure
Is there something I could use to fill the old hole, like epoxy or Bondo? Since the new hole won't overlap, I am not too concerned about the bit wandering into the old hole while drilling, but the anchor needs something to expand against. Another option is to simply drill another center hole 1/2" lower, and live with the exposed screw (the screws are meant to be covered by rubber bumpers for the door to stop against).

I thought about shimming the side piece up by 3/16" (and trimming it by the same amount), but that would mean the bottom hole is awfully close the old hole in the tile.

Also, let me take the opportunity to express my disappointment in the bathroom/ construction industry for making it close enough to be a problem but not close enough to reuse the existing mounting points.
O

Oka
Corporate Member
There are a few of ways to approach this:

Clean and prep with Denatured or isopropl alcohol....... this is critical it is clean.

1. stuff a small amount of papers in the hole to create some backing. Because the hole is small it can be tricky. Or, you could use expando-foam (wear gloves and mask off that stuff is worse than silicone).

Then, fill with Dow 795 silicone glazing caulk or you could use non shrink grout if you have, I would use the silicone for such a small hole.

Dow makes other caulkings that are pretty awesome but may be hard to find 789, 790, 791 ,792 these versions are more for exterior highrise expanding joints and can fill a 1" vertical gap without sagging amazing stuff. 795 is pretty common so you should be able to find it without too much looking, might call a window glazier if you know one and get a 3/4 spent tube for free.

You could also use rubberized 2 part epoxy if you can find it it also will work well. We use this on highrise roofs to flash pipe as a roof jack instead of using an actual roof jack, not sure how small a qty you can buy.
N

Jim
Senior User
If I could find matching tile I'd just replace the ones where the holes are. It's not that difficult.

smallboat
Corporate Member
epoxy. I'm sure WEST would work if you have some, but its not available in reasonable size for that job. 2-part epoxy plumber's putty would be a good choice. available at your favorite color box store or tractor supply

John
Corporate Member
Did you try flipping the the side pieces?

Fred
Corporate Member
Why not just make new holes? Only requirements are a few new tools, but that shouldn't be a show stopper for you. You, like me, like new tools!

Bas
Corporate Member
Thanks everyone for the ideas!


nn4jw said:
If I could find matching tile I'd just replace the ones where the holes are. It's not that difficult.
Click to expand...

Agreed, but I'm not sure where I can find the tiles, the previous owners did not leave any extras.

smallboat said:
epoxy. I'm sure WEST would work if you have some, but its not available in reasonable size for that job. 2-part epoxy plumber's putty would be a good choice. available at your favorite color box store or tractor supply
Click to expand...

FredP said:
Why not just make new holes? Only requirements are a few new tools, but that shouldn't be a show stopper for you. You, like me, like new tools!
Click to expand...

I'm with you Fred, every project is an excuse reason to get a new tool. The problem isn't drilling the new hole, it's that the old and new would be right next to each other.

JohnnyR said:
Did you try flipping the the side pieces?
Click to expand...

I did. Unfortunately, the piece is symmetrical, with the middle hole centered. I should write Delta and tell them to stop doing that. Nobody cares if the top bumper is at 5" from the top and the bottom bumper is 6" from the bottom. Or maybe they did that so that you can't accidentally do the left and right frame pieces differently, I could see that happening to the average DIY-er

Oka
Corporate Member
Yeah this stuff will do the trick as well this stuff is good... forgot about this

Fred
Corporate Member
make new holes in both. laminate some aluminum stock inside the new channel and drill new holes. might be able to find aluminum plugs in the specialty hardware isle?
J

Jim
Senior User
I think I would fill the hole with grout. It is a form of concrete so it would be good for the plastic screw anchor to expand into. Grout is pretty flexible which doesn't seem consistent with anchoring. Epoxy is less so but more than grout. But if I did not have grout on-hand, I'd probably use epoxy. You won't see it so you just need the function. Grout seems closest to tile.

Charlie
Corporate Member
Is there wood framing behind the area so you can use longer screws and not anchor to the tile?
That worked for me last time I replaced shower doors.

Chris
Corporate Member
Schluter’s Kerdi-fix would be a great choice.