kind of a cool find

cripto
Not sure how many of you have ever seen or thought about these before but i found some aluminum extrusions on amazon. I picked up one that i am going to use as a fence on my drill press. I liked how it had all the t slots on it and they work really well for that purpose. they have smooth and one that has little valleys on them as well. The nice thing is they do have a little weight to them so they could make a nice fence and are very smooth and flat. I checked mine and it was spot on. I think it was .000? out and at that amount i dont care anymore. I will post pics once i get the hole thing built seeing as how it is the next thing on my list to make. You can get these in alot of different sizes and lengths. They can be i think about 2x4 in size but i have not seen them i got a 1x2 one for my drill press fence. Hope this helps someone having a nice solid fence or even a rail like this at times can be really nice and the fact it has all the t slots on it make it both easy to mount to things and adaptive. 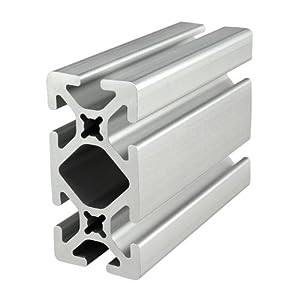 Mike
Corporate Member
I like the Bosch brand, been using it for about 15 years.
D

Dave
Also look for 8020 on eBay. Lots of it available.

Jeremy
Staff member
Corporate Member
The same aluminum extrusion is used on the aftermarket tablesaw fence from VerySuperCoolTools (http://vsctools.com/). I liked the idea of having T-Slots in my fence and my current tablesaw fence is not straight along its length, so I ordered one. I was disappointed when I received it. It was not flat along its height. A straight edge rocked quite a bit on both faces of the extrusion. Using some feeler gauges, I was able to determine that there was a 0.005" hump in the center.

After doing some research on this specific issue, it appears there are others that have encountered the same issue. The extrusion that I got (48") was very flat along the majority of it's length. It was off by about 0.008" in the last 6" at the very ends. Given that the fence from VerySuperCoolTools was not inexpensive, I returned it. Maybe the 0.005" hump in the center isn't that big of a deal and I am being overly picky, but it annoyed the crap out of me.

At this point I am planning on modifying my current Biesemeyer fence by replacing one of the faces with a woodpeckers super track (http://www.woodpeck.com/supertrack.html). I know the super tracks are flat because they are used on the woodpeckers super fence which I own for my router table. I think I can correct the lack of straightness on my current fence and get the T-slots for about 25% of the cost of a fence from VerySuperCoolTools.

Jeremy
Staff member
Corporate Member
I contacted 80/20 about a extrusion on eBay and they told me that the flatness tolerance for their extrusions is 0.012" per 1" of width.

I made the mistake of getting their catalog several years ago. It takes way to long to drool my way through it.